A nursery rhyme from the 19th century claims that "Little girls are made of sugar and spice and all things nice." If one took Maurice Chevalier's words to heart, there would certainly be good reason to "Thank Heaven For Little Girls."

Surprisingly, not every girl aspires to become a Disney princess. Kay Thompson's 1950s series of children's books about a young girl named Eloise (who lived on the top floor of the Plaza Hotel) boasted a whimsical sense of adventure.

Other little girls (Regan MacNeill in The Exorcist, Fantine in Les Misérables, Dawn Wiener in Welcome to the Dollhouse, the title characters in Rosemary's Baby and Carrie) may have been drawn from fantasy, but were much less fortunate. Whether some girls turn out to be little hellions or precocious sexpots (Heathers, Mean Girls), their mischievous pranks and malicious antics can drive an adult to distraction.

When a child is born, we want her to experience the world with an open mind and a fearless heart that can soak up all the love and learning that we can provide. We want her to become a better child than we were, to share her toys, study hard, and build relationships in school that will become the foundation of a good life. Puberty transforms our little girl into a young woman whose innocence is spellbound by the precarious beauty of sexuality.

As parents, we dread the day when our little girl becomes a woman because on every continent, she will be seen more in terms of her sexuality than her ability to solve an equation, write a poem, or lead a room of people. Movies, music videos, and magazines push for a place at the family table to celebrate skin over intellect. The male gaze often dominates women's bodies and infects their minds with a false sense of inferiority. But still, they endure and find ways to survive while transforming heartbreaking obstacles into lifetimes of possibility.

That's all well and fine for young girls who grow up the way their parents hoped they would. But what happens when a girl develops into an obnoxious spoiled brat? Or a conflicted gifted child? The standard approach to watching the apple of one's eye blossom into adulthood may become totally irrelevant.

Crowded Fire Theatre recently presented the American premiere of Truck Stop (a rowdy drama by Australian playwright Lachlan Philpott) in a production whose sound design (by Brendan Aanes) and combustible stage direction (by Marilee Talkington) delivered a solid punch to the solar plexus.

There are plenty of laughs to be had as the audience watches two privileged, 14-year-old Australian girls act out at their private school and at home. But as the girls try to emulate the empowered lifestyle they see on television and in fan magazines reflecting 2008's pop culture, it becomes obvious that their lives are depressingly dull and far from glamorous. 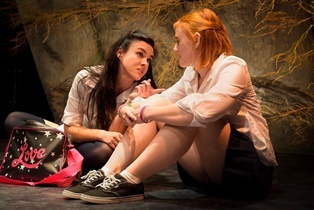 School bores them, their parents embarrass them, and the curse of living in a depressingly bland Australian suburb "with garbage spewing out of everything" leaves these girls with only one form of escapism: imagining that their lives are part of a video that will rock the world and that their selfies are capturing moments of historical importance rather than cries of angst and teenage desperation. 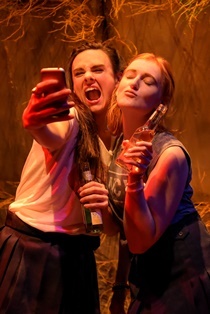 Sam (Jessica Lynn Carroll) and Kelly (Chelsea Looy) have been BFFs for years. While much of their lives have been spent waiting for someone (a magical boyfriend) or something (fame and wealth) to come their way, the last thing they were expecting was Aisha (Jamie Asdorian), a newly arrived and reasonably well-behaved classmate from India who still cares about her family and clings to some semblance of modesty.

For Sam, Aisha represents a source of annoyance wrapped up in a dark-skinned immigrant, someone who is going to reflect poorly on the whiteness of Sam's privileged microcosm. For Kelly, Aisha represents a chance to meet a new friend and possibly broaden her very limited horizons. But when Sam and Kelly team up, Aisha becomes a sacrificial lamb, an innocent young girl whose soul can be corrupted and who can be manipulated into taking the kind of sexual risks that would easily bring shame to her conservative Indian family. 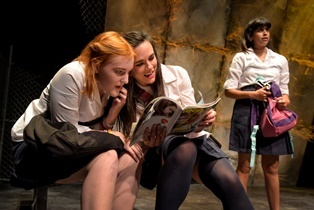 It doesn't take long before Sam and Kelly tire of taunting Aisha and decide to skip class and walk down a local highway until they arrive at a truck stop. When a hot young trucker descends from his cab to stretch his legs, Sam dares Kelly to approach the man and chat him up.

Slightly reticent at first, Kelly takes Sam up on her challenge and ends up following the man back into his cab. One adventure leads to another until the two girls are routinely turning tricks and being paid for casual sex by a limitless stream of truckers.

When one of the girls naively puts the make on a man who is a devout Christian, the concerned trucker notifies local authorities and the families are informed about their daughters' extracurricular activities. Sam and Kelly quickly learn that their actions can have consequences. In a rare moment of introspection after being transferred to another school, Sam stands alone at the end of the play and wondrously exclaims "I'm a bitch!"

Working on a simple but highly effective unit set designed by Maya Linke and lit by Andrew Lu, Talkington's teenagers endure annoying confrontations with their teachers, school counselors, and mothers (all played by Jeri Lynn Cohen), who seem unable to talk any sense into the rebellious young girls. 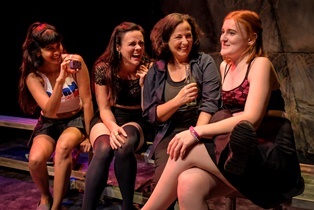 Once you get used to some fairly thick Aussie accents, it's easy to admire the wild growing pains and barely repressed rage evident in Philpott's script. As Sam, Jessica Lynn Carroll paints a portrait of a teenage girl who is big on bravado but trembling with insecurity beneath her emotional armor. Jamie Asdorian scores strongly as the young Indian immigrant who is trying to break free from her mother's standards and traditions. As Kelly, Chelsea Looy shows how easy it is to succumb to a close friend's bullying and what happens when she takes the reins of power into her own hands.

In recent years, Lauren Gunderson has written some exquisite plays about intelligent women making major breakthroughs in the fields of mathematics, philosophy, and science.

Poster art for Ada and the Memory Engine

Slowly but surely, women in the fields of science and math are getting some recognition. After David Auburn's play, Proof, premiered off Broadway in 2000, it transferred to a larger theatre uptown and won the 2001 Pulitzer Prize for Drama as well as the Tony Award for Best Play. 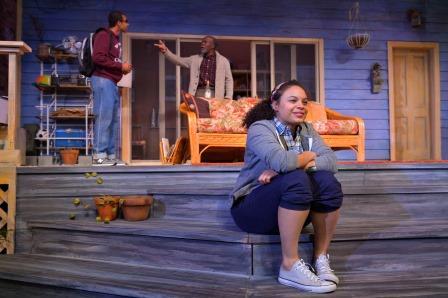 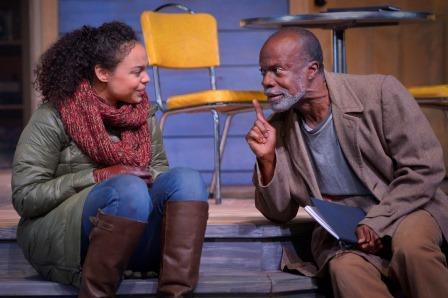 In his recent article in The New York Times entitled Behind the Failure of Leap Transit's Gentrified Buses in San Francisco, technology columnist Farhad Manjoo noted that:

Leap is one of at least several dozen tech companies that have failed this year. Their deaths are illuminating; dead start-ups show us which investors' theories are bogus, which technologies aren't ready for prime time and which common ways founders overextend themselves. In particular, Leap's death suggests one emerging cause of start-up doom, a problem that also did in the anonymous social network Secret: too close an association with Silicon Valley's tech-bro sensibilities. Leap exuded a kind of bourgeoisie exceptionalism that fed into the city's fears of gentrification and won it few fans.

Leap was created by and for techies. It was born inside the bubble, and it could never escape. The company entered the thicket of San Francisco regulatory and civic debate without spending much time to win over fans in the community. Its on-board aesthetics and services lit up every gentrification warning sign, such that, from the start, Leap seemed designed only for those people -- the tech people who give everyone else a bad name.

Had the founders of Leap included any women, someone with a different set of critical thinking skills might have been able to identify the structural faults in its business plan. In his recent Op-Ed piece in The New York Times, Manil Suri stressed The Importance of Recreational Math. That was never a problem for Catherine, who shared her father's thirst for solving complex mathematical challenges. However, as the artistic director of TheatreWorks Silicon Valley, Robert Kelley, explains:

"Proof is a play about genius, focusing on the bond between fathers and daughters, on mental fragility and personal strength, on our confusion at the threshold of love. One aspect of the play has resonated ever more strongly in the years since that first production, and led to its revival on our season this year: Proof is also about prejudice and gender, about our lingering cultural diminishment of women in STEM and other fields that have long been dominated by men. Gender disparity is a fact of life in our Silicon Valley. As our region has maintained an unfortunate reputation for sexism and a boys' club atmosphere, gender inequality remains endemic throughout American culture." 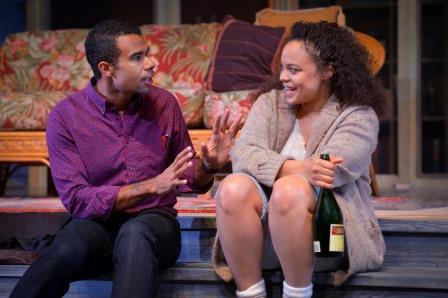 Lance Gardner (Hal) and Michelle Beck (Catherine)
in a scene from Proof (Photo by: Kevin Berne)

In her determination to sell the family home and relocate her kid sister to New York, Claire has rushed into a real estate deal without ever consulting Catherine. When one of Robert's former students comes across a series of notebooks in the deceased man's study, Hal's eagerness to analyze their contents makes Catherine suspicious of his motives. While Robert's dated entries about the mathematical problem he was trying to solve make no sense to Claire, Catherine is easily able to understand them.

After Hal (Lance Gardner) spends a night with Catherine, she lets down her guard and gives him the key to the drawer in her father's desk where she keeps her own notebook (in which she was working on an extremely complex mathematical proof). It's the kind of work that Hal instinctively doubts could have been written by Catherine because, for starters, she's a girl. The fact that Catherine's handwriting closely resembles her father's becomes a major point of contention when Claire demands to know who wrote the proof. 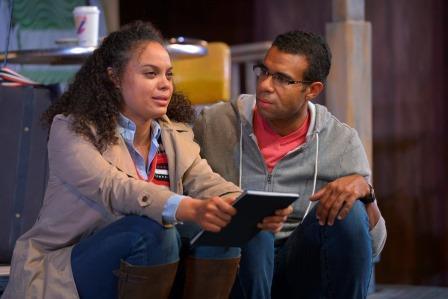 Catherine (Michelle Beck) shows her work to Hal (Lance
Gardner) in a scene from Proof (Photo by: Kevin Berne)

Directed by Leslie Martinson on a handsome unit set by Annie Smart, the TheatreWorks Silicon Valley production of Proof did a solid job of demonstrating how a remarkably intelligent woman could have her talent devalued, her work doubted, and her integrity called into question by friends and family who lack the intellectual chops to understand the depth and breadth of her achievement. It also demonstrated how the blind ambition of an eager young student like Hal could make him incapable of recognizing someone else's genius if it did not come gift-wrapped in a man's body.

Martinson's four-actor ensemble did an impressive job of handling Auburn's flashbacks and confrontations, although Claire (Ashley Bryant) and Robert (L. Peter Callender) are secondary characters whose primary functions are to challenge the parameters of Catherine's internal conflict. While Michelle Beck did a beautiful job as Catherine, I found myself more deeply moved by Lance Gardner's portrayal of Hal, the socially inept nerd whose uncontrollably geeky behavior sidelines his innate sense of empathy until the play's touching finale.