Now, don't think that bats know about fertilization. Not even humans are good at taking this into account, which is why we have the morning-after-pill. Animals are not worried about reproduction. Pleasure, however, is something they understand.

Bonobos are also great kissers. In fact, I know a caretaker at a zoo who used to work with chimps, which are rather platonic kissers. When he had to take care of the bonobos one day, and accepted a kiss from one of them, the man was taken aback feeling a whole tongue in his mouth. 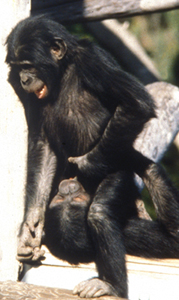 What are they doing? Two juvenile male bonobos.

Lots of jokes and comments usually follow any discussion of animal sex lives, but in my mind this merely serves to mask human discomfort. When we downplay or laugh away animal sexuality, we're applying our own moral standards to them. And scientists are not immune. Talking about bonobos, for example, they sometimes call them "very affectionate," whereas what they mean is that they engage in genital contacts at the drop of a hat. In another example, a prominent American anthropologist once claimed that sex was not all that common in bonobos, until it was found that he had counted only heterosexual sex between adults. In bonobos, this is only a small portion of sexual encounters, which often involve same-sex partners and juveniles.