You think FEMA might not want to bring any more attention to itself, but an article on its website has managed to cause yet another controversy for the federal agency.

The post, titled "No Doesn’t Always Mean No - Appealing a FEMA Assistance Denial Decision," has drawn criticism for its play on a term that usually applies to date rape prevention. The term "No Means No" is widely used on college campuses and in sexual education classes across the country.

The FEMA article has nothing to do with sexual assault, but instead details instructions for how to apply for aid if you've already been denied assistance. It was written by Director Of Public Affairs Lars Anderson.

FEMA came under fire in 2005 for its slow response to Hurricane Katrina. During Hurricane Sandy, the federal agency was much quicker to provide aid to those affected by the storm. 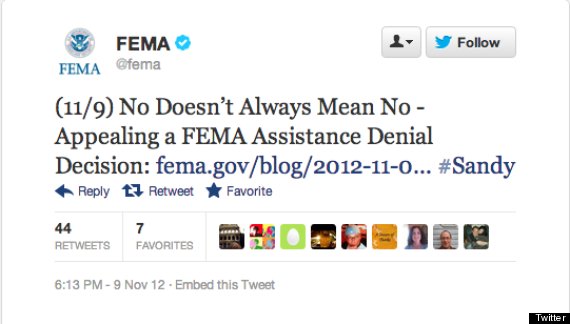 UPDATE: FEMA deleted the tweet and apologized on Saturday, tweeting, "Apologies to anyone we offended w/ this tweet … our intent was to inform survivors of disaster assistance process." The title of the article was also changed to "Appealing a FEMA Assistance Denial Decision."

FEMA Rape Reference: 'No Doesn't Always Mean No'
War On Women
1 / 6
99 Problems (JAY-Z)
Eric Fehrnstrom, senior campaign adviser for Mitt Romney, <a href="http://thinkprogress.org/politics/2012/06/03/494238/fehrnstrom-shiny-objects-women/" target="_hplink">said on Sunday</a> that issues pertaining to women's reproductive rights, such as abortion and birth control, were "shiny objects" meant to distract voters from the real issues. "Mitt Romney is pro-life," he told ABC's George Stephanopoulos. "He'll govern as a pro-life president, but you're going to see the Democrats use all sorts of shiny objects to distract people's attention from the Obama performance on the economy. This is not a social issue election."
The Raw Story