When I was four years old I had a series of recurring, hazy dreams, after which I would wake up in a panic -- heart pounding, palms sweaty, eyes wide open, feeling as though the entire world had slowed down and I was being swallowed up by it. I remember the content of the dreams far less than the feelings they elicited. Years later, I realize these are probably my earliest memories of anxiety attacks.

Anxiety is a mental health issue that 40 million Americans struggle with -- and women are diagnosed with anxiety disorders at nearly twice the rate of men. This statistic has proven highly controversial. Are women simply biologically wired to worry? Are we socializing our girls to be more anxious than our boys? Are men just less likely to admit that they experience anxiety?

Daniel and Jason Freeman, authors of The Stressed Sex argued in a TIME Op-ed that the gender differences we see in mental illness diagnoses are real -- and we refuse to acknowledge them for fear of being sexist. They wrote:

This data isn't illusory: it shows that huge numbers of people are struggling with psychological problems -- and the majority of them are female. Some would say that men experience just as much mental illness as women: they just don't admit it. But the scientific evidence to back up such an assertion simply isn't there.

Of course it's easy to fall into damaging gender stereotypes when discussing mental illness -- especially since disorders like anxiety have historically been associated with the image of the "hysterical" woman. Hysteria was a catch-all mental illness diagnosis used for women up until 1980 when it was finally erased from the Diagnostic and Statistical Manual of Mental Disorders (DSM) and replaced with conversion disorder. And though it hasn't been a serious diagnosis for decades, its associations are harder to shake. Just last week I overheard a snippet of one young couple's conversation as they walked along Broadway. The girl, who was about 18, was trying to explain to her boyfriend that anxiety attacks are a real and scary thing, something that she had experienced. His response? "Oh, I thought that was just another term for 'psychotic' that girls use."

While researchers and mental health professionals may, as Freeman and Freeman argue, be afraid of coming off as sexist if they diagnose and treat men and women differently, those of us who struggle with anxiety or depression or eating disorders (all illnesses which women suffer from in greater numbers than men) are often afraid to speak up about the potentially gendered nature of our experiences for a different reason. We are acutely aware that doing so means we may be labeled a "crazy woman." And "crazy" women aren't taken seriously, professionally or otherwise.

And yet my struggle with anxiety has almost always been tied to my femaleness. It's closely linked to negative feelings about my body and physical attractiveness, dating and the irrational fear that I'm going to end up childless and alone. It's responsible for my tendency to feel like an imposter when I accomplish something professionally. Body image, love life, impostor syndrome -- all characteristically feminine sources of worry. And I doubt that I'm the only one whose "issues" stem (at least in part) from the often-stifling pressure to be perfect.

It's these social differences between men and women that I believe provide the most compelling explanation for why women suffer disproportionately from mental health issues. As Freeman and Freeman wrote in their op-ed: "Considering that on the whole women are paid less, find it harder to advance in a career, have to juggle multiple roles, and are bombarded with images of apparent female 'perfection,' it would be amazing if there wasn't some emotional cost."

By not speaking up -- about our individual experiences and about the general experiences of women struggling with mental health issues -- we do everyone a disservice. (In 2010, Glamour reported that the average woman waits nine to 12 years after experiencing symptoms of anxiety disorder before she is properly diagnosed.) There has to be a happy medium between refusing to acknowledge that women are suffering from mental health disorders at greater rates than men are and assigning ladies the "crazy psycho" label. Because as Freeman and Freeman point out, there's no way to know for sure what is causing this mental health gap until we start having these conversations and start funding research that can give us answers.

Over the years I have learned little tricks and coping mechanisms for handling my anxiety: put both feet on the ground, breath in and out of your nose, take a walk, be aware of destructive thought patterns and actively work to change them. I have come to know my anxiety like a close "frenemy," and the more I talk about her, the more I find that other women relate. When we've reached a point where 23 percent of American women are all struggling with the same demons, it time to start talking about them and confronting them -- collectively. 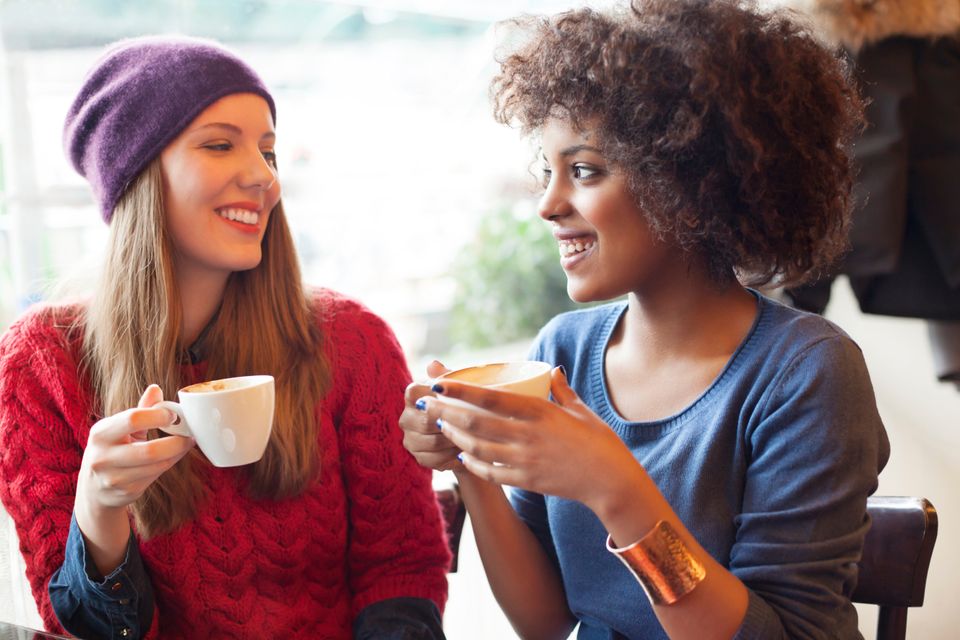 1 / 16
Talk It Out
Talking to a close family or friend was the most popular way to deal with stress in the survey, and this social support is a tried-and-true stress-buster, experts say. Not only is it comforting, a strong social network may actually <a href="http://www.ncbi.nlm.nih.gov/pmc/articles/PMC2921311/" target="_blank">ward off mental illness on a genetic level</a>, according to a 2007 review. Talking to someone who can sympathize can also help normalize the stressful experiences, says Bourdeau. "Someone who is able to say, 'I've experienced that too' can make stress more manageable," she tells HuffPost. Plus, just hearing yourself talk through what's bothering you helps begin the problem-solving process, she says. Just make sure to <a href="http://www.apa.org/helpcenter/manage-stress.aspx" target="_blank">talk to the right person</a>, writes the American Psychological Association. If you're stressed about a family matter at the moment, calling home may not be the best solution.
Getty Images