A recent essay in the Telegraph entitled “The Secret Lives of the Great Artists’ Lovers” begins: “For as long as man has painted, he (and it usually is a he) has painted his lovers.”

Art enthusiasts have long been fascinated with the lives of the artists behind their favorite works, and particularly with the elusive relationship between artists and the muses that inspire them. But when we think of artists and muses, it’s hard not to think of a male artist and a female muse -- whether we’re harkening back to the ancient Greek goddesses, or thinking of the supine forms of female nudes that line the walls of the world’s art galleries. Contemporary exhibitions like “Picasso: the Women Behind the Artist,” currently on display at San Francisco’s de Young Museum, or “Madame Cezanne,” at the Metropolitan Museum, only serve to emphasize the longevity of this idea. 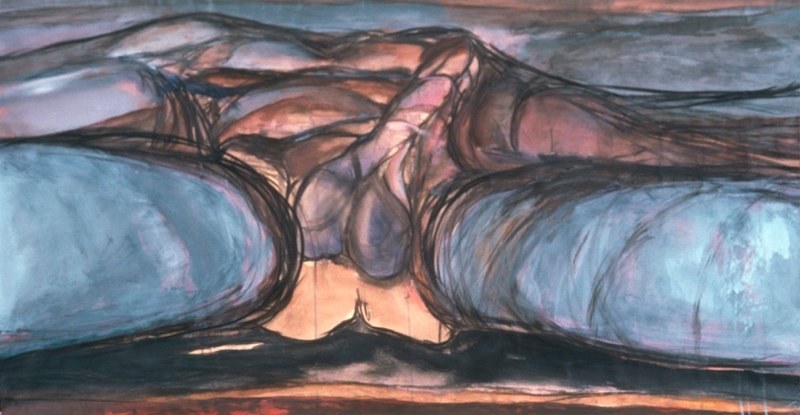 Landscape #160, by Eunice Golden. (Courtesy of the artist)

“While other women artists portrayed the female body, often their own genitalia, as an emblem of their own power,” she said, “I wanted to go beyond that, to find my own path to challenge society’s entrenched ideologies and mores. My muses were male artist friends who posed for me and supported my work.”

Golden’s work is a powerful example of the female gaze, a uniquely female expression of the way the erotic imagination of an artist can fuel her creativity. Other feminist artists, like Nan Goldin and Sylvia Sleigh, similarly sought to reverse the typical gender dynamic of artist and model. But for other women throughout art history, the relationship between female artist and male muse has often been more subtle, hidden behind the canvas, rarely depicted. The love stories, tormented flings, and artistically fertile mentorships that filled female artists’ lives have given rise to some of their greatest work. Below, we explore the relationships between ten female artists and the men that provoked, challenged, loved and inspired them to create.

A Brief Guide To The NSFW History Of Penis Art