I was crawling on my hands and knees on a filthy concrete dressing room floor in Tijuana, Mexico. This was not a scene from Papillon; this was me after a gig. It was 1993. My band, Zuzu’s Petals, had just completed the most embarrassing blind-drunk set of our careers, and I was worried that we’d be kicked off our fabulous one-month, high-profile tour -- opening for the dreamy new-wave swashbuckler Adam Ant -- because I was behaving so unprofessionally. Zuzu’s Petals’ stock was finally rising, thanks to our well-received first album. With more people in the crowd, I felt more responsibility to put on a decent show and not be sh*tfaced.

Broken glass embedded itself in my palms and kneecaps as I dragged myself to the toilet, which sat bare and open in the dressing room. After I’d heaved a day’s worth of tequila shots from Señor Toad’s out of my system, I attempted to steady myself on my feet by leaning against a cinder-block wall. My forehead was sweaty, and there was a fresh tear around the armhole of my lacy, off-white vintage first-communion dress. The pink satin bow marking the center of my Peter Pan collar was untied.

Adam Ant’s soundman and drum tech patted me on the back and said, “You girls are our heroes.”

We had been perhaps a little too well behaved, too demure and careful in the eyes of the veteran crew. Now that we’d attempted to perform blind drunk, followed by a public puking session, we were welcomed members of the club -- we were bona fide rockers.

Musicians, like house painters, writers, and actors, are often presumed drinkers. I like to blame as much as I possibly can on Frank Sinatra -- a tough enigma to crack. He embodied that near-impossible alchemy of even parts stone-cold talent, charisma, tenacity, and a soft heart with a jigger of total douche-baggery sprinkled in for complexity. The Sinatra-led Rat Pack made being hammered onstage look like so much fun, like such a laugh riot. Look at Frank, Sammy, and Dean, all so loose, sexy, and cool -- highball in one hand, smoke in the other. Everybody wanted them. Nobody loved it very much when Shirley MacLaine filled in for the ailing Dean Martin. That swinging men’s club image was so seductive that even well into the 1980s, many of us subconsciously clung to that model. Who wouldn’t want to be fun and funny while smoking, drinking, and singing? What could be better? Nothing.

In creating Zuzu’s Petals, an all-women band, there was a presumed strength in numbers. We were sisters in our cups. After our tipsy performances, fans would congratulate us, saying things like, “You guys really rock, for girls!” and, “You girls look like you’re having a lot of fun up there!” while offering to buy us shots. But they weren’t clawing to get to us -- they wanted to service the band dudes, no matter how wasted and skanky they were. Sad but true.

Back in my rock band days, there were a host of terrific drinking buddies in our constellation of Minneapolis-based male musician friends: the Replacements, Soul Asylum, the Jayhawks. We also made plenty of new male drinking pals on the road: Best Kissers in the World, Otis Coyote, the Fuzztones. We could hold our own with any of them. It was the late eighties and early nineties—everyone drank because everyone’s parents drank. We drank because it was fun and it was how otherwise socially challenged artistic types could comfortably socialize.

And then there were the female booze-loving musicians -- our role models. Like Janis Joplin, Chrissie Hynde, Joni Mitchell, Deborah Harry, Peggy Lee, and the Go-Gos (all above average in the cool category). We, too, enjoyed the grape, along with our contemporary female musicians: Kim Deal of the Pixies, half of L7, Babes in Toyland (original trio), Shawn Colvin, Lucinda Williams, and two-thirds of the band Scrawl, to name a few. Cool women in the arts drank, like Zelda Fitzgerald and Greta Garbo (“Give me a whiskey, baby . . . and don’t be stingy”).

The women of Zuzu’s Petals just wanted to have fun. At First Avenue, a nightclub in downtown Minneapolis where we'd paid endless dues, clawed our way into the main room, the big concert venue with the proper stage and sound system -- the best stage in town, the crew of stage managers and sound people began to refer to us as the Slur Girls -- we had a reputation for slurring our words after too much drink. They even named a cocktail after us, a tall, red, delicious drink made with Absolut Kurant, cranberry juice, and lemon. “It’s the Slur Girls!” they’d say when they saw us tearing around the club all night in various stages of uproarious laughter, clutching our cocktails and vintage handbags.

Drinking went out of vogue for a stretch in the early 1990s with the advent of straight-edge punk and the riot grrrls, a postfeminist, female-centric musical movement with strong political leanings. Some of them were vegans in favor of abstinence. Some turned to heroin. Neither group talked to us much when we played together on the road. We Slur Girls were fine with that; we were busy not taking ourselves too seriously. When once asked by a music journalist if we considered ourselves riot grrrls, my bandmate Co purred, “We’re not riot grrrls. We’re a riot.” Already veterans of the road and the recording industry by the time the riot grrrls came out growling, we had worked hard to avoid being pigeonholed. Nevertheless, we would forever be labeled a chick band.

Back in the so-called day, I had horrendous stage fright, and a couple of drinks did wonders. Today I find myself on that same First Avenue stage once a year, thanks to a charitable friend who asks me to dust myself off and sing a David Bowie song to help raise money for a no-kill cat shelter. I love this event. Local musicians, old and new, perform an evening of all Bowie songs. My excited anticipation of this evening borders on manic.

As it did when I was a Slur Girl, the old model still grabs hold of me -- a few drinks, but not too many, before going on. Too many cocktails, and you get “drunk voice,” that terrible audience-punishing phenomenon where your voice gets stuck in a two-note range but you think you sound like dynamite. Drunk voice is embarrassing.

One year I was granted the crown prince of Bowie songs, “Rock ’n’ Roll Suicide.” I had too many drinks while catching up with old friends backstage, and then it was my turn to hit the stage. Clad in a purple-and-black corset, with fresh lilac sprigs in my hair, I reconnected with my inner Slur Girl, the alcohol allowing me to forget for a few moments that I’m now Middle-Aged Woman with Endless Responsibilities. “Time takes a cigarette . . . ” I rasped.

My crappy performance is still up there online somewhere, I’m told, and it makes me cringe. I croaked and overemoted like Norma Desmond. My voice sucked because I had drunk too much. The image of the drunken presuicidal Anne Sexton performing her poetry with young hipster musician/fans in Cambridge, Massachusetts, haunts me. It’s at the top of my situations-to-avoid list.

Last year, I was assigned Bowie’s “Queen Bitch.” To prepare, I sang quietly to myself a cappella while walking my dog. I no longer allow myself more than two beers before my turn on Bowie Night and never a Slur Girl cocktail, nerves or no nerves.

Almost 20 years after the fact, I have to ask myself: Did I create a band and forge a career in music because it was a job at which one is pretty much expected to drink? As with all tricky questions, the answer is not cut-and-dried.

Rock shows, parties, dancing, singing, hanging with friends, book clubs, luncheons, great conversations, gatherings of all types, and travel are among my favorite things to do in the world. All those activities are exceptionally drinker-friendly, and that’s when I like to drink. I’m naturally very social.

When I shut in or isolate myself, however, I tend to fall into the abyss of depression. I never drink alone. I keep a dry house. I am, in middle age, mindful not to overdrink, mostly because hangovers become increasingly brutal with age, and I can’t afford to miss a day, but also because drunk, oldish women are viewed unfavorably. Drunken male musician onstage? No big deal. Funny. Caddish. Charming. Drunken chick onstage? Pathetic. Sad. Out of control. So many things are still not fair.

I recently emailed my former bandmates, asking them how they felt about our old moniker the Slur Girls. Our bassist’s response was perfect: “In the ’80s it was kind of a badge of honor. Today, not so much.”

This adapted excerpt of "Ladies and Gentleman, The Fabulous Slur Girls" by Laurie Lindeen is from "Drinking Diaries: Women Serve Their Stories Straight Up" edited by Leah Odze Epstein and Caren Osten Gerszberg. Available from Seal Press, a member of the Perseus Books Group. Copyright 2012. 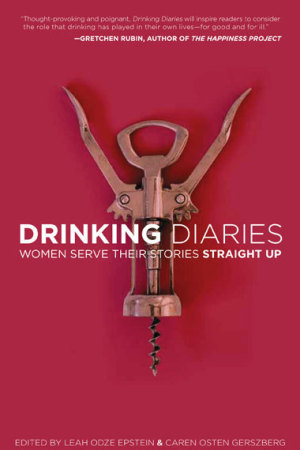