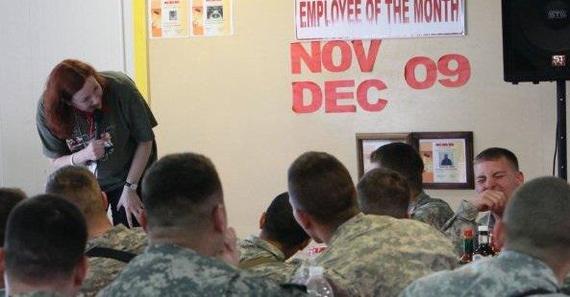 I have been a standup comedian since the fall of 1980. Back then, it was a novelty to be one. Hell, no one really understood what a standup comic was. And the only women hugely successful at that time were Phyllis Diller & Joan Rivers.

My how times have changed. In the 30-odd years I have been slinging jokes, television had a run of comics in front of brick wall shows, comedy clubs opened all over America and oh yeah, the Internet.

When I started out, you waited outside the club you wanted to work at all day, waiting for a number in which you then came back at the end of the night for the privilege of going onstage. It was a lot like waiting for tickets for a concert back then. I met some great comics on that line, Margaret Smith and Rita Rudner were just two. Paul Reiser was hosting, Bill Maher was one of the regulars, and a young guy named Jerry Seinfeld was the comic you HAD to see.

If and when you got passed at the club you were given the lovely opportunity of going on late in the evening to a bunch of drunks. And that's how you got strong. Night after night, onstage with no-one paying attention to you. Sometimes the crowd was louder than you, sometimes you ducked from someone throwing a beer bottle during a fight. All in the name of getting your 10 minutes of jokes funnier.

Eventually I ended up doing the New Jersey one-nighters. And that's exactly what it sounds like. Some restaurant with a room in the back with a bar figured "Hey it's empty here during the week, let's do a comedy show." We got paid, we got fed, we were in heaven.

Around the late 80s comedy exploded. And we were all basking in the new found fame that standup comedy had brought. I did every TV show that showcased comedy in one year. I knew that returning to these shows would take another year so I decided to become pregnant. I was told being pregnant would ruin my career. Funny thing, I was back on television three months after my son was born. Nowadays there are a huge amount of comics with kids. Back then it was unheard of.

I lived my life performing on the road and it was starting to get to me, leaving my young son at home. So to give him somewhat of a normal childhood, I moved to Las Vegas to work in production shows. Yes, you read that right, Las Vegas & NORMAL childhood. Except for the fact mommy was the dirty comic in a burlesque show, my son had a very ordinary upbringing. Little League, school performances, friends that lived around the corner.

I was 48 when I moved back to New York City; it's been seven years since I left Sin City. You do the math, but I ain't getting any younger. My husband and I had pined for NYC since we left it all those years ago. We wanted to come home and so we did.

New York changed since I left all those years ago and so has comedy.

It is no longer an artist's game, it's for the masses now. And if there's one thing today's society has been programmed for, it's that old people don't matter. Being over 50 means you are this close to death. I see it when people look at me in the streets, when I walk into a clothes store, when I turn on the television or watch a film. Occasionally we get something starring Helen Mirren or Judi Dench and us oldsters jump, (ok maybe not jump, we could hurt ourselves) for joy.

Truth be told, sexism is a piece of cake compared to ageism. At least I got whistled at when I was younger. Now the wind whistles through my thinning hair.

So when DID the ageism start? Lucille Ball was 40 when she created I Love Lucy in 1951. She went to become one of the most influential people in television and was revered until her death at 78. The thing about the days of early television was that everyone was given chances (no one really knew what they were doing) and from that great TV was born.

Mentally I don't feel any older, physically it's day by day. Hanging out at a comedy club till the wee hours just isn't fun anymore and that's where a lot of my business takes place. Oh I can still drink anyone under the table doing shots of Patron but my recovery is now about a week. I start yawning around the time The Daily Show is ending. I have traveled thousands of miles across the USA and around the world to make people laugh. I'm tired.

The problem is that I still love being a comic. It has been part of my life for over 30 years. You know the saying "Everyone's a comedian?" These days, everyone IS. Right now, somewhere, someone is thinking to themselves I make my friends laugh, I'm gonna make a video and put it up on You Tube and it'll go viral. That's where Hollywood is looking for their talent these days. I can't compete with youth, nor do I want to. What am I going to say to the powers that be, "Hey I'm old and wrinkly but I have wisdom!"

I'm proud of my age and refuse to bow down to the gods of plastic surgery. Nothing is scarier than an old person with a wrinkly body but with a face you can skate on. I've been told that mentioning my age will hurt my career. Yeah right, just like "having a baby" did all those years ago. It IS a young person's game. So maybe it's time to throw in the towel and find something new. But the catch here is because of the rampant ageism in TV & film, the "real world" has been told not to look at us boomers either.

Slowly I have been moving away from standup comedy which makes me sad. I am doing more directing & producing shows, mentoring young comics, a lot more writing. At least with writing, no one can say, "get me a good looking 22 year old". Well, if they did, I would just say, "give me a minute to write her in".

In the seven years since I've returned to NYC I have seen so many people who were just finding their way as young comics blossom into huge successes. Getting onstage every night, writing new jokes, honing their material. And that's the way it should be. I'm just hoping one of them will let me play their mom... or grandma.

Buy Carole's CD "because I said so" here