You really shouldn't need any more proof that women are a huge part of the video games industry, but we're going to give you some anyway.

According to the Entertainment Software Association's annual "Essential Facts About the Computer and Video Game Industry" report, women enjoy gaming as much as men, with 48 percent of gamers identifying as female and 52 percent identifying as male. 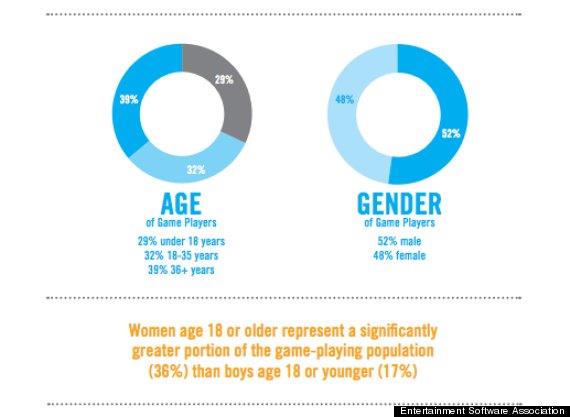 The age and gender breakdown of gamers in this year's report on the computer and video game industry.

The gap between male and female gamers has shrunk since last year's report, which said 45 percent of gamers were female and 55 percent were male. Even greater is the difference between 2014 and 2008, when men outnumbered women 62 percent to 38 percent.

The ESA says its annual gathering of facts and figures is the most targeted of its kind. The group pulls data from more than 2,200 nationally representative households, interviewing the heads of households and the most frequent gamers in the households.

The gaming industry has earned itself quite a reputation for sexism. Many female gaming reporters and game developers have spoken out about the harassment, threats and mistreatment they've faced just for being women who care about games. And that's saying nothing of the countless female gamers who mute their microphones or hide their gender to avoid harassment while playing games online.

But the increase in attention has led to more conversations about women in the gaming-related workplace, as well as in the games themselves.

On April 23, an opinion piece by gaming news site Polygon's Jonathan McIntosh attempted to explain the subtle, everyday sexism facing female gamers. "I can be sure that my gaming performance (good or bad) won’t be attributed to or reflect on my gender as a whole," he wrote of being a male gamer, continuing, "I can walk into any gaming store and see images of my gender widely represented as powerful heroes, villains and non-playable characters alike."

One hopes the ever-increasing numbers of female gamers will help this industry reform. Perhaps gaming newsrooms or development studios will soon become more female-friendly places of employment, and more games will be designed that feature a strong, central female character.

The ESA's report concludes that consumers spend $21.53 billion on the gaming industry. Imagine how much more profitable it could be if it started treating half its audience equally!