A visit to any Muslim-majority country will quickly reveal the variations that exist when it comes to appropriate female attire. But what do most residents consider most appropriate?

The University of Michigan’s Institute for Social Research conducted a study in seven Muslim-majority countries which asked the question "Which one of these women is dressed most appropriately for public places?" 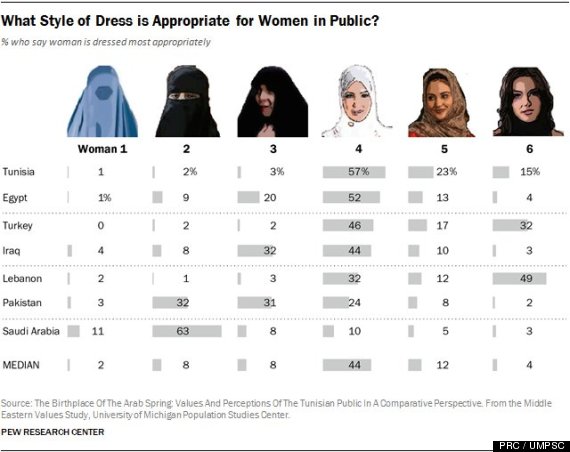 The style #1 is en vogue in Afghanistan; #2 is popular among both conservatives and fundamentalists in Saudi Arabia and other Persian Gulf Arab countries; #3 is the style vigorously promoted by Shi’i fundamentalism and conservatives in Iran, Iraq, and Lebanon; #4 and #5 are considered most appropriate by modern Muslim women in Iran and Turkey; and #6 is preferred by secular women in the region.

Unsurprisingly, Saudi Arabia ranks highest for the most conservative clothing preference, as 63% of respondents pointed to the face-concealing niqab style as the most appropriate covering.

On the other side of the spectrum, 32% of Turkish respondents and 49% of Lebanese respondents said that they considered an uncovered head to be most appropriate.

Overall, most people surveyed considered the conservative hijab look of woman #4 to be the most appropriate dress for public.

The study also investigated responses to the question, "Should women be able to choose their own clothing?" 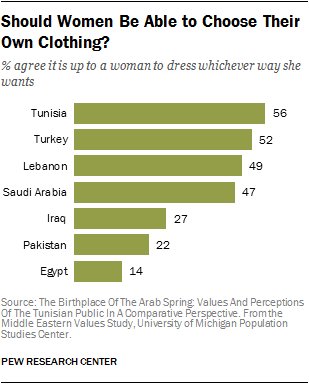 The data was gathered as a part of the "Middle Eastern Values Study" conducted by the Michigan Population Studies Center.