Why do young people, including girls and women, turn radical and what role does the Internet play in their radicalization?

Lebanese sociologist Mona Fayyad said students of violence mechanisms should consider ties between the environment and violent behavior, including contextual hereditary and biological factors, systemic psychological elements from depression to character to personality to an individual's learning capacity, to political, social, and cultural elements. 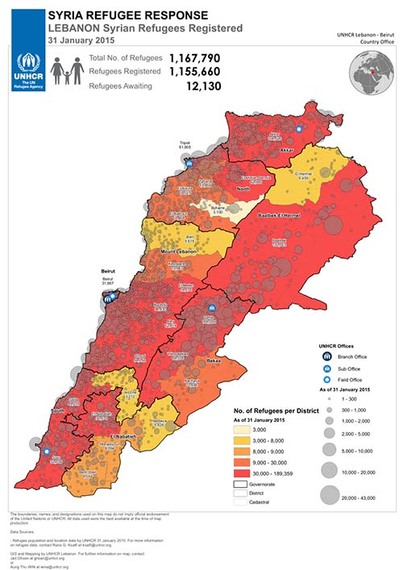 "High crime rates in crowded urban areas, notably poverty belts surrounding major cities, often go undetected by social monitoring and supervision, leading to an increased possibility of crimes and violence alongside a collapse of traditional structures," she said in a study of Syrian refugees and migrants in Lebanon and their exposure to untold horrors and injustices possibly leading to deviant behavior.

Lebanon hosts upwards of 1.5 million Syrian refugees and migrants who escaped the war in their country, depending on whose figures one believes.

Pre-existing pockets of extremism in Lebanon, from which women and girls are not immune, compound the Syrians' possible radicalization.

A BBC Arabic Service episode of "Dunyana" (Our World) in August focused on "Women in Extremism," or the carrying of extremist ideology by females, as recruits and victims.

The show also highlighted whether women have a role as peace builders. 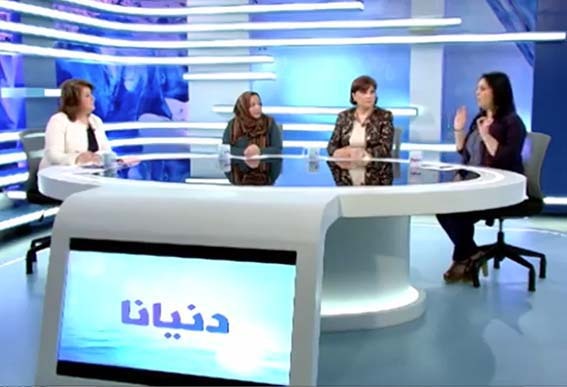 According to women experts on the show, many of the recruits fighting in Arab countries come from abroad. While home grown female jihadists in Iraq exist, for example, many others hail from Tunisia, Yemen, Egypt, Europe and Russia.

One researcher said women recruits exhibited character weakness, a proclivity to violence, a need for escape (from their reality), and were in search of alternatives.

Al Qaeda, said one expert, realized that women were half of society and had a strategic importance in it, hence the need to recruit them to perform military duties as well.

The concept of social reproduction was key to recruitment efforts, she added. So if women are trained and indoctrinated in extremist thoughts, usually through the Internet, they'll create like-minded generations, and guarantee continuity for various roles in such a radical environment.

This online picture purportedly of Saudi women wearing the "niqab" (full face cover) has one holding up a yellow sign that says: "From besieged Mecca we support and pay homage to the Islamic State." 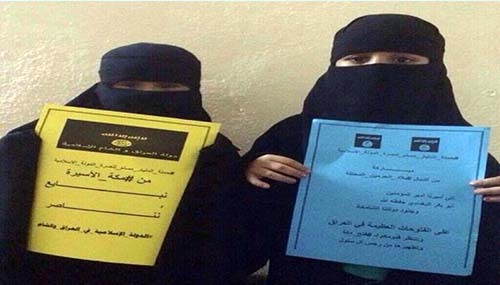 The blue sign the other woman is holding is fuzzy but seems to indicate they're waiting for ISIS to clean up Mecca following its "great military accomplishments in Iraq."

Sadly, authorities in many countries treat the symptom, not the cause, of radicalization.

What draws women and girls to extremist organizations?

In most cases, it's under the false pretense of a better, holier and more exciting life. To their horror, they discover it's all a hoax. 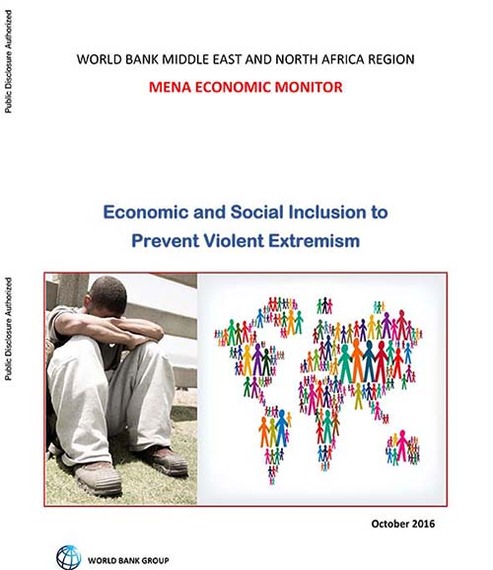 Its study released in October 2016 said:
Bringing an end to civil wars and countering violent extremism are the highest priority for the MENA region. While much of the effort involves the security sector, an economic perspective can shed light on the underlying causes of violent extremism. In particular, as we show in this section, among the factors that lead people to leave their country and join radicalized groups is the lack of economic and social inclusion in their country of residence.

In the "Data on Daesh (ISIS) Foreign Recruits" segment, the study points to Saudi Arabia, Tunisia, Morocco, Turkey and Egypt as the top five countries supplying recruits who travelled to Syria to join the organization.

Among the non-Muslim-majority countries, Russia, France, and Germany supply the largest numbers of ISIS' foreign workforce, it said.

Laura Passoni, a Jihadi bride, was convicted in Belgium for joining ISIS a day after members of the group struck the Brussels airport and metro. 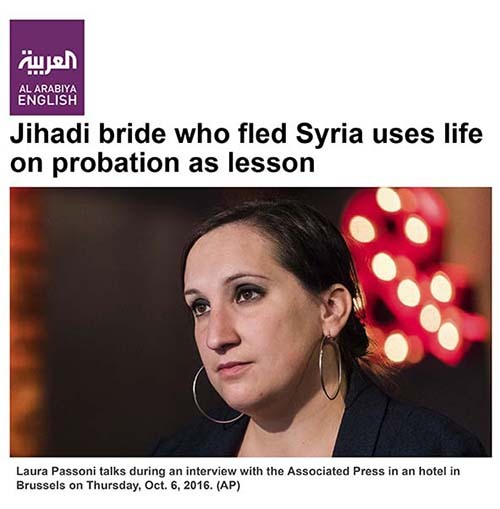 She spends her time on probation trying to persuade young people her decision to go to Syria in June 2014 was the worst mistake of her life.

Asked why females were such an attractive commodity, she replied: "Why women? Because we make babies and especially boys, the future cubs of the caliphate as they say. They need descendants."

Media reports said Passoni was a convert to Islam, met a man online who persuaded her to marry and travel to Syria with her young child. She was apparently persuaded after reading what recruiters on Facebook had said that Belgium would never be home to a good Muslim.

She eventually returned, after much difficulty and realizing it was the wrong move.

Franco-Iranian sociologist, researcher and author Farhad Khosrokhavar said "jihadism" is an act of identity recovery in a Western society in which jihadists are misfits.

"It's a form of brutal and savage - even excessive and pathological - revolt that allows jihadists to self-affirm and not submit," he said. "While Western life focuses on the pleasures of life, jihadism seduces by focusing on death."

Asked what made increasingly large numbers of young girls go to Syria, he said it was the most unsettling and paradoxical phenomenon. He referred to British studies that said the girls go to get married and rear children. 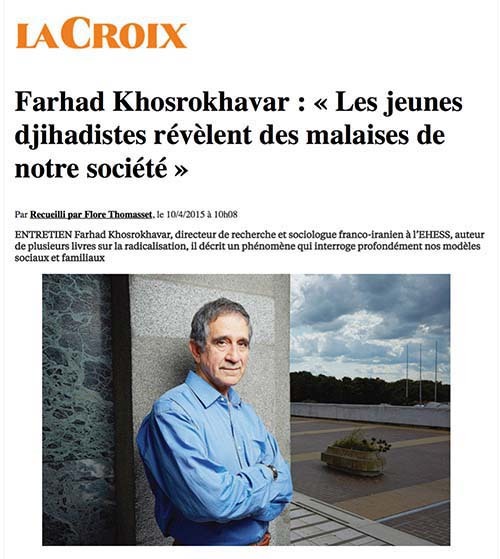 He attributed it to these girls' disenchantment with feminism in Western society and their disinterest as second-generation females in their mothers' feminist struggles.

In their eyes the classical patriarchal family provides a feeling of security and belonging, he explained. "The girls think the (ISIS) fighters are serious boys while those of France appear as cheats and immature."

He added there's a "disconnect" between parents and children who spend an inordinate amount of time in the virtual world.

Parents must take charge and become aware of the emptiness their children feel without reverting to a regressive form of vertical and patriarchal authority, he noted.

On August 6, The Economist headlined an article: "Look forward in anger: By treating the young as a threat, Arab rulers are stoking the next revolt."

The article referred to Arab countries full of young people frustrated by a lack of jobs; questioning traditional authority; bittersweet about the West, its liberties and its power; and plugged-in enough to know that their lot is worse than that of many of their peers around the world.

"Many factors led to the Arab uprisings of 2011, which overthrew old rulers in Tunisia, Egypt, Libya and Yemen, and rattled many other regimes. But there is little doubt that the Arab world's large youth bulge, and its rulers' failure to harness it for economic development, was central," it said.

The worst affected are the women and girls, by many accounts.

"These days life for young Arabs is often a miserable choice between a struggle against poverty at home, emigration or, in extreme cases, jihad. Indeed, in places such as Syria, the best-paid jobs involve picking up a gun," it said.

Enter the matter of media and information literacy (MIL).

The need for MIL is crucial in the Middle East/North Africa region to help mitigate the adverse effects of youth radicalization via the Internet. 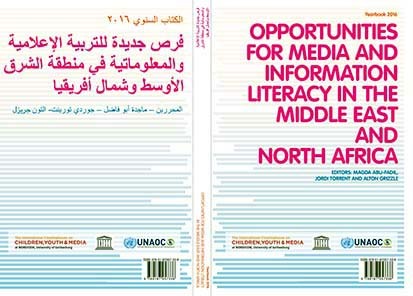 I'm the lead editor and co-author of a just-published book aimed at creating awareness on the subject.

I started on this MIL road in 1999 with a colleague from the University of Missouri's School of Journalism, followed by many other projects.

In 2007 I presented a paper for a UNESCO world literacy conference in Doha, Qatar entitled "Media Literacy: A Tool to Combat Stereotypes and Promote Intercultural Understanding."

Last month I trained Lebanese, Jordanian and Iraqi journalists on how to cover religion and sensitive matters.

The media play a key role in informing and misinforming sometimes naïve audiences on religion, sectarianism, cultural differences, etc. They often contribute to hate speech and sedition and could use proper guidance.

There's a need for better engagement with girls and women through
- Education, revised curricula
- Media and information literacy
- Relevant gender studies
- Cross-cultural and interreligious initiatives
- Buy-in from, and involvement of, the media
- Violence-free projects in schools
- Creation of useful apps and games for disaffected youth
- Capitalizing on social media to benefit and protect women and girls.

Remember: Media are a double-edged sword. They cut both ways.

(This blogpost is based on the author's talk at the UNESCO conference "Internet and the Radicalization of Youth: Preventing, Acting and Living Together" in Quebec, Canada. It was presented at a workshop on "Gender Perspectives and the Process of Radicalization.")