"It's messed up, I had to lose an eye to see things clearly," Alia said, shaking her head. My charismatic and confident classmate then carefully tucked her hair under her veil. "Bushwick Bill?" I asked. She smiled and showed off her perfect row of teeth. "Yes!" She seemed pleased, yet slightly embarrassed that I had noticed that she was quoting an old-school rapper. I was intrigued by Alia's story and by the words she used to describe how fortunate she was compared to her "sisters" in the poorer parts of the city. "Do you listen to hip hop?" I asked. "Do I listen to hip hop?" she laughed, "not only do I listen, but for your information, I am the most talented yet least famous undercover MC in all of Cairo. Matter of fact, not even my parents know of my musical accomplishments!" I leaned back and listened.

The year was 1993, I was a high school exchange student in Cairo. It was the first time I had heard of the growing underground hip hop/rap movement in the Middle East -- a movement in which young Arab women played a prominent role.

Rewind. South Bronx in the late 1970s -- also known as the birth place of hip hop -- was plagued by unemployment and racial discrimination. At the same time, the civil rights movement helped establish a sense of identity for minority and marginalized communities. It also helped shape the hip-hop mindset and movement, empowering the young and disenfranchised and giving them a creative outlet to share their stories of growing up in the inner city, about feeling ignored or being taken advantage of. American hip hop's engaging and controversial style has been adopted and adapted around the world; undergoing a process of constant reinvention with each new culture it passes through. In the Arab world today, and much of the developing world, hip hop has once again come to represent the empowerment of the disenfranchised. In the words of Lebanese MC Malika:

"Arabic hip hop isn't just entertainment, it's a possibility to speak up. It's our turn to show what we've got!" Another female MC added: "I don't care to rap about bling, fame and money. I rap about the poverty I see, the unemployment women and youth face. I want to send a message, the way the old-school rappers did." 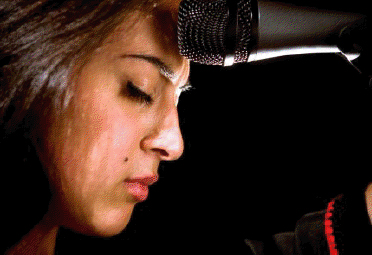 Their Side of the Story Hip hop has allowed some Arab women to tell their side of the story. Although both male and female MCs address their social and political circumstances, certain themes are more prominent among female MCs: a new sense of identity and opposition to punitive social policies and under-representation of women in the labor market. "I can talk about it because I can feel it," Moroccan MC Soultana said. "Women understand each other. We have a whole generation that is confident and ready to go on stage and rap about these issues." Some MCs touch upon the role elder women can have in perpetuating outdated views on women in the workforce. One example is a supportive husband who has to lie to his own mother about his working wife's whereabouts. The non-apologetic lyrics transcend borders and resonate throughout the region. Years after my conversation with Alia, the messages conveyed through these lyrics still resonate with me in my work with the World Bank's MENA Social Protection team. In the same way that the female rappers remind us of what's important, face-to-face consultations also help us stay focused on the issues that directly affect the women and youth of the region. The message is loud and clear: youth and female unemployment. While acknowledging that unemployment impacts both women and men, most in the region agree that it's much more of a pressing issue for women and new labor market entrants -- of both genders. Two other thoughts were brought up in our recent consultations: that women tend to acquire specializations that meet public sector needs (which rarely leads to work opportunities in the private sector) and that the Arab world has invested so much in female education that it is now time to capitalize on that investment. As one young Tunisian woman told me, "We need to discuss both practical and cultural constraints to female labor market participation" -- something the MCs have been doing for quite a while.

The recent World Bank regional flagship report on jobs in the Middle East and North Africa attempts to address these constraints. It proposes policies that could help reduce barriers to women's participation in the labor market. There is a need to ensure women have access to child care, transportation to work, and a safe workplace, and to increase women's capacity to start and run their own businesses (which are compatible with prevailing social norms). These are all fundamental starting points to empowering women in MENA. As the region's female hip hop artists put it: more voice and more choice.

The blog has also been cross-posted at the World Bank MENA blog site.