"Putin is the Apocalypse!"

According to the fierce activists of the feminist group FEMEN, neither the Mayan calendar nor the planet Niberiu will cause the world to perish. Instead, they lay the blame on one man:

Four FEMEN activists staged a topless protest against Putin in Brussels on Friday, shouting "Putin go to hell! Democracy, democracy," AFP reports. The Russian president was in the Belgian capital to attend an EU-Russia summit.

In a statement on its website, FEMEN said it wanted to "drive from the capital of the European Union apocalyptic dwarf Putin and warn EU about the disastrous [sic] for democracy from close contact with the Kremlin freaks."

FEMEN calls on the leaders of the European Union to stop immediately political, economic and cultural contacts with Gazprom-Kremlin's dictatorship. FEMEN warns eurobosses that dependence of the gas pipe will bring Europe to the economic collapse, the abolition of visas for Russians threatens Europe with cultural Armageddon, and political appeasement before Putin threatened with the Customs Union.

FEMEN was founded in 2008 in Ukraine to protest gender discrimination in post-Soviet society, and the organization has since earned a global reputation for its topless protests. Members of the group demonstrated bare-breasted during the London Olympics, the Euro 2012 soccer tournament in Poland and against the imprisonment of the members of the jailed Russian punk band Pussy Riot. 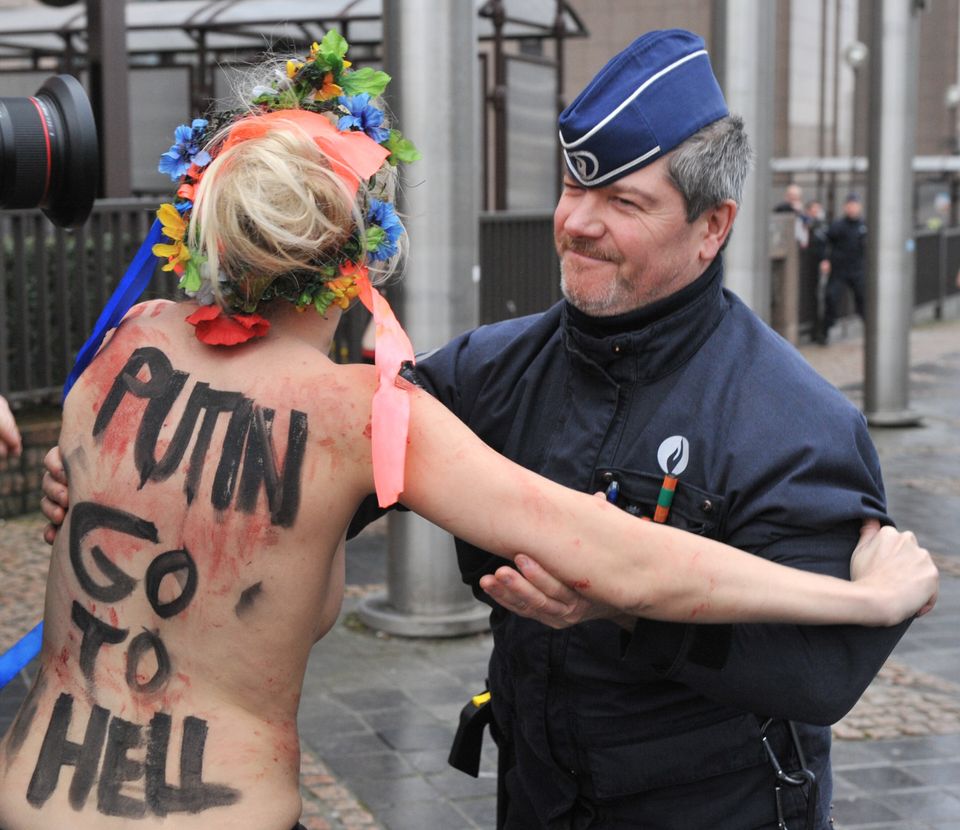 1 / 6
An activist of Ukraine's feminist movement Femen is taken away by the police as she demonstrates by the EU Council building where the EU-Russia summit is taking on December 21, 2012 in Brussels. (GEORGES GOBET/AFP/Getty Images)
Getty Images