It seems it's never too cold for FEMEN. Despite temperatures dipping to minus 11 degrees Fahrenheit, members of the Ukrainian activist group protested outside the headquarters of Russian gas monopoly Gazprom -- topless.

According to the Associated Press, the women held signs reading "Gas Racket" and "Gas Gangsters," accusing Russian Prime Minster Vladimir Putin and Gazprom of subjugating Ukraine and Europe through its gas policies.

According to the Russia Times, FEMEN's official blog notes that the group is targeting Russia's "gas terror" against Ukraine during the country's freezing winter.

Gazprom is the biggest producer of natural gas in the world.

FEMEN was formed by radical feminists in 2008 to protest gender discrimination in post-Soviet society, Radio Free Europe/Radio Liberty reports. The group has since expanded its efforts to include subjects such as international women's issues, human rights, and opposition to Russian prime minister Vladimir Putin.

In December 2011, FEMEN protesters stripped during mass protests against the allegedly rigged elections in Russia, holding signs saying, "God Get Rid Of The Czar."

Earlier this month, members of FEMEN also gathered outside the International Ice Hockey Federation's main offices to protest Belarus as the host of 2014's Hockey World Cup. Belarusian president Alyaksandr Lukashenko's has been accused of increasing human rights abuses, and Belarus has been called the "last European dictatorship."

"Topless protests are probably the strongest and most effective form of peaceful and nonviolent protests to attract attention," Anna Hutsol, one of FEMEN's leaders, told Radio Free Europe/Radio Liberty in an interview.

"You can throw a grenade, go on hunger strike, blow something up or shoot someone. Or you can go out topless," Hutsol said. 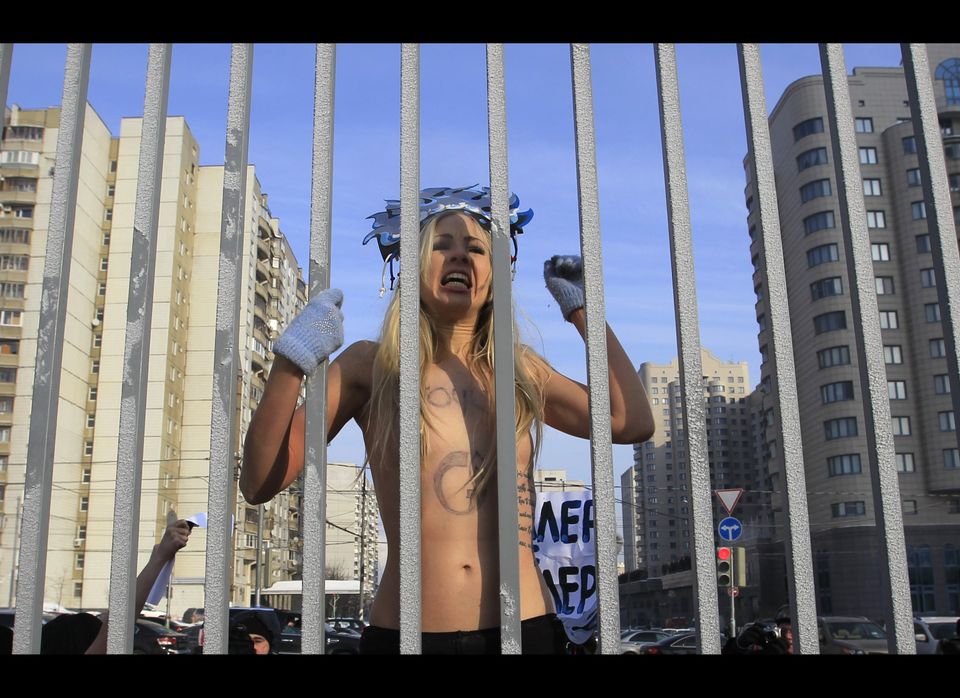