When the International Ice Hockey Federation chose Belarus to host the 2014 Hockey World Cup, it may not have expected to attract the ire of a legion of topless Ukrainian feminists.

That's where FEMEN, a radical group formed in 2008, stepped up to the plate.

According to Russia Today, FEMEN demonstrated topless in the freezing cold near the IIHF's main office in Zurich, Switzerland.

"Topless protests are probably the strongest and most effective form of peaceful and nonviolent protests to attract attention," Anna Hutsol, one of FEMEN's leaders, told Radio Free Europe/Radio Liberty in an interview.

Russia Today reports that the protesters reminded the hockey organization that Belarusian officials had been denied entrance to the European Union and United States because of human rights violations.

This is not the first time that FEMEN has protested against the situation in Belarus. In December, three of its members were reportedly abducted by the Belarusian KGB, blindfolded, beaten, and left naked in a forest after protesting Belarusian President Alexander Lukashenko's rule.

Human Rights Watch notes that Alyaksandr Lukashenko's dictatorship has become increasingly repressive, with reports of human rights abuses including violations of due process, restrictions on media and violent crackdowns on demonstrators.

According to Amnesty International, Belarus is the last country in Europe to carry out executions.

In January, President Obama signed into law the Belarus Human Rights and Democracy Act of 2011, slapping new sanctions on the country.

Below, see photos of FEMEN's most recent protest. 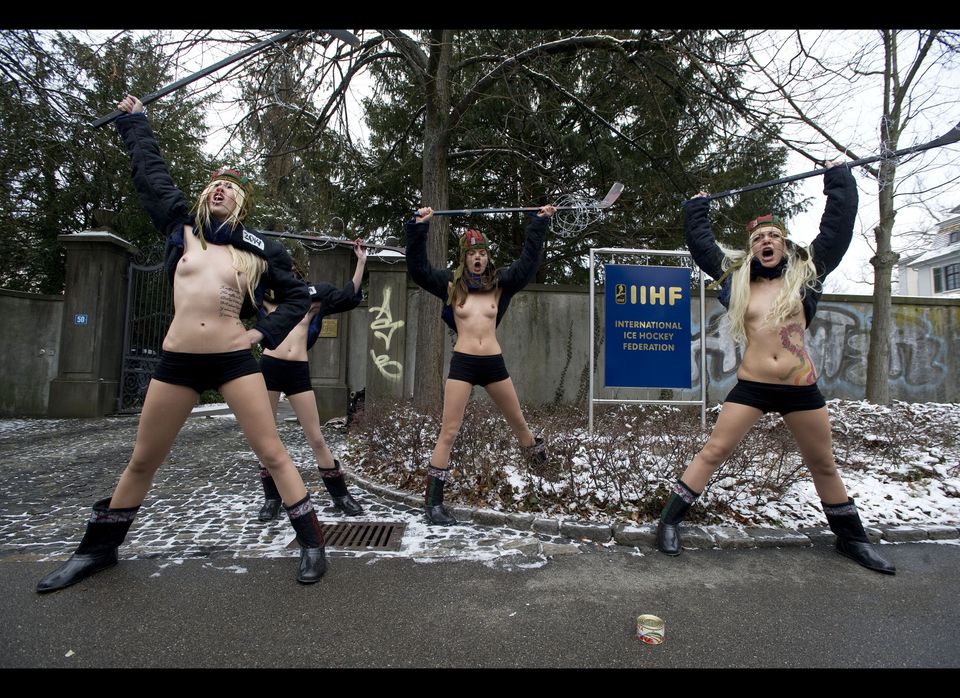 1 / 7
Activists from Ukrainian feminist group FEMEN shout slogans and carry hockey sticks during a topless protest on February 1st, 2012, in Zurich against the Hockey world cup in 2014 in Belarus. (SEBASTIEN BOZON/AFP/Getty Images)
Getty