Turns out FEMEN, a Ukrainian feminist group, is also up in arms about the win of Vladimir Putin's United Russia party in the Dec. 4 elections.

WARNING: PHOTOS BELOW CONTAIN SOME NUDITY

To show their disapproval, FEMEN protesters stripped down in front of The Cathedral Of Christ The Savior in Moscow on Friday, holding signs that said, "God Get Rid Of The Czar,' AGI reports.

The women were detained by security guards and taken into police custody, Reuters reports. The women were released shortly after being detained.

In an effort to explain their stance, the the FEMEN protesters wrote about the Moscow demonstrations today on their website. They noted that during the protests, one of their activists dislocated her arm as a result of a scuffle with the guards.

This isn't the first time the Russian prime minister has motivated women to show skin. According to the New York Post, an Internet campaign kicked off on YouTube in July invited Russian women to strip to show their support for Putin's presidential campaign.

Putin, who became prime minister in 2008 after serving two presidential terms, this week filed his application to once again seek Russsia's highest office in the March presidential election.

Check out the below images capturing FEMEN protesters stripping down in Moscow Friday. 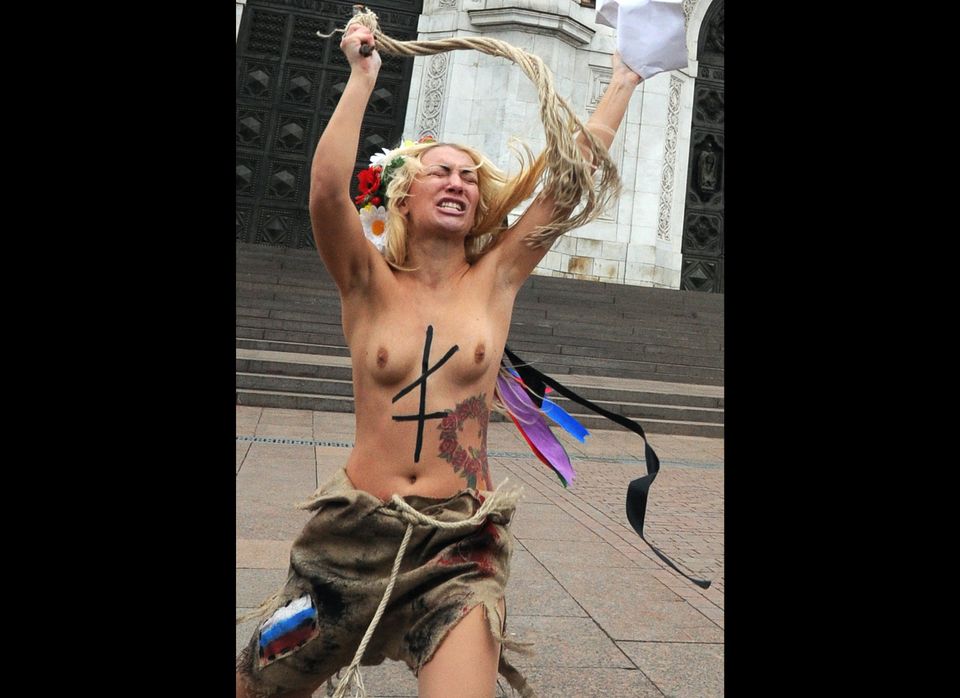 1 / 8
Russian Woman Strips In Protest Of Putin Election
One of the activists of the Ukrainian women's movement FEMEN takes part in a stage performance in front of the Christ the Saviour Cathedral in Moscow, on December 9, 2011, in protest of the alleged rigged December 4 parliamentary elections
Getty Images