The brazen young members of Ukraine's women's rights group Femen are going to new lengths to ensure their voices are heard -- and those methods often include letting down their bra straps. (Scroll down for photos.)

Established in 2008 by a group of Kyiv university students, Femen now comprises an estimated 300 members, mainly students, who are prepared to go topless in public in support of women's rights, Reuters reports. Anna Hutsol, Femen's 26-year-old leader, says the group's main aims are to improve the role of women in Ukraine's male-dominated, post-Soviet society.

Though sex tourists and visiting foreign businessmen are their main targets, members of the group most recently stripped down at an event promoting Iranian culture to reportedly demonstrate against the case of Sakineh Mohammadi-Ashtiani, a woman in Iran handed a death sentence for adultery. The Kyiv Post reports that a boob barrage was staged in October during a visit from Russian Prime Minister Vladimir Putin, with members holding signs that read, "We won't sleep with Kremlin midgets," a less-than-subtle dig at the Russian premier's diminutive height.

Hutsol's followers say they remain undeterred by Ukrainian officials' initial reaction to Femen, which was one of casual dismissal. "We want to show that our women have a demeaning role in our society," 22-year-old economics student Alexandra Shevchenko told Reuters. "Their place is seen as in the kitchen or in bed."

And if the city's increased police presence at their protests is any indication, Femen is starting to be seen as a force to be reckoned with. "The police are becoming more aggressive now," Hustol said. "But at least that shows we are being taken seriously." 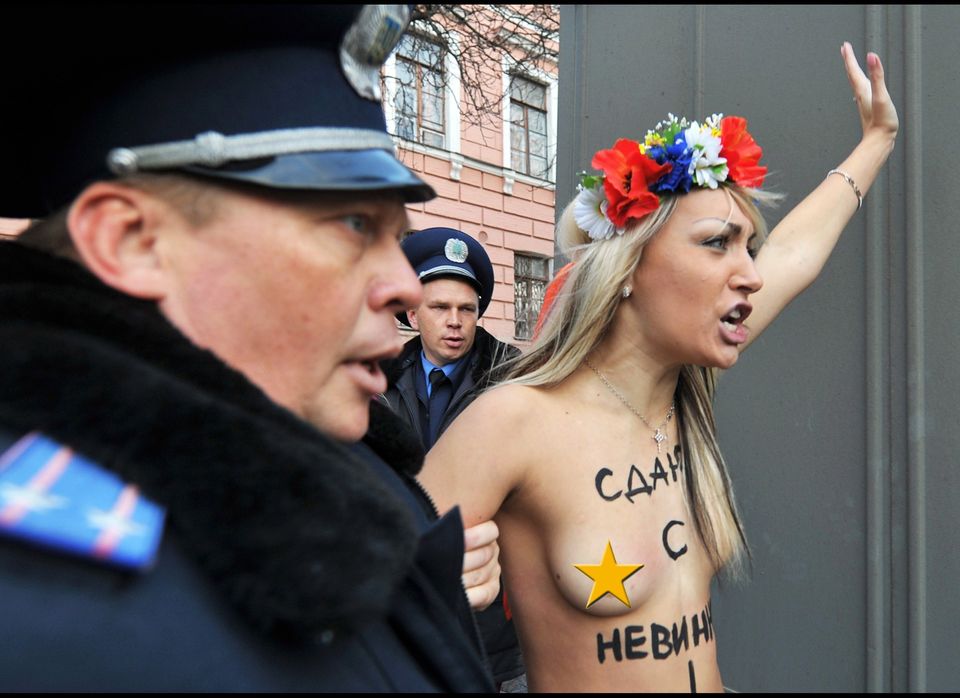