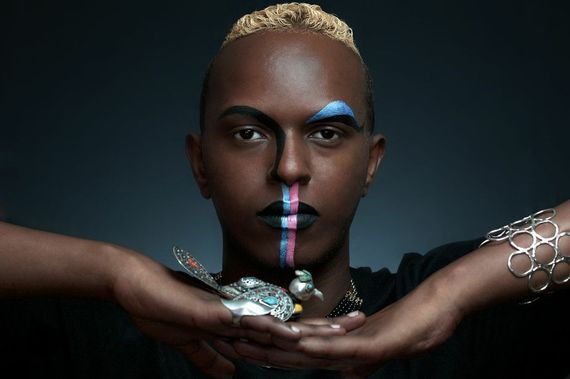 When I first told my friends that I would be wearing a pearl-studded mock-Elizabethan gown for the cover of my book, Fairytales For Lost Children, they were doubtful. In the past I had flirted with androgyny by wearing women's jewelry and a dash of perfume but I had never worn a dress. To my friends, though the notion of a man wearing a dress meant having an extra pair of balls, it seemed essentially perverse. But to me the idea made perfect sense. My book was about gay Somalis exploring their sexual identities and gender roles, so why not riff on these motifs by donning a jewel-encrusted queen's dress?

I liked the flamboyant cheekiness of the concept, but when I went to the costumier for my first fitting that sense of cheekiness gave way to something more dynamic and surprising. As the costumier strapped me into the corset I didn't feel constricted. Instead, I felt -- and looked -- ice-cool, sensual, striking, powerful, virile.

In Against Interpretation and Other Essays, Susan Sontag argues that, "What is most beautiful in virile men is something feminine; what is most beautiful in feminine women is something masculine." To me, this is the most elegant breakdown of the Jungian theory of anima and animus -- the feminine principle within men and the masculine principle within women.

Some of our most influential cultural figures -- David Bowie, Grace Jones and Prince in particular -- have straddled this dichotomy for decades. Miles Davis summed up Prince's visceral sex appeal as such: "He's got that raunchy thing, almost like a pimp and a bitch all wrapped up in one image, that transvestite thing."

In Somali culture hyper-masculinity is the most desired attribute in men. Femininity signifies softness, a lightness of touch: qualities that are aggressively pressed onto young girls and women. When a woman does not possess feminine traits, it is considered an act of mild social resistance. This applies equally to men who are not overtly masculine but the stakes are considerably amplified. If a Somali man is considered feminine he is deemed weak, helpless, pitiful: The underlying message being that femininity is inherently inferior to masculinity.

Variants of this thinking extend across most cultures, belief systems, races and sexualities: Western gay culture is as obsessed with exaggerated masculine traits as the patriarchs of Somali clans. Femininity is predominantly perceived as an unappealing quality, a canceling-out of hyper-valorised masculine traits, with effemiphobia reaching its natural end-point on the online gay dating circuit with the infamous "No fems" or "be straight-acting" tags that pop up on most profiles.

In the case of gay men one could argue that decades if not centuries of stigmatization have created a culture of conformity fueled by internalized homophobia: The accusation -- and it is framed as an accusation -- that same-sex-attracted men fail to be authentically masculine has left an enduring mark. But where does that leave everyone else who doesn't fit the "straight-acting" tag? After all weren't the Stonewall riots, the birth of the gay civil rights movement, kick-started by the transgender community, drag queens and effeminate young men -- the most outcast members of the gay community? Shouldn't they be our heroes?

The case for effemiphobia often hinges on a threadbare argument against "camp" overexposure. Prominent and popular performers like Paul O' Grady, Graham Norton and Alan Carr are constantly cited as stereotypes of what an imagined mainstream society wants from their gay performers: flamboyant, with outsized, unthreatening and mostly desexualised personalities. But it takes a tremendous amount of chutzpah to be as charming, cheeky and exuberant as O'Grady, Norton and Carr have been throughout their careers. Each of these performers has mined his experience as an effeminate gay man into comedic gold, and each one is now giggling all the way to the bank.

The position of these men as wealthy performers, however, obscures their outlier statuses, and their success is not an accurate representation of the daily stigma and abuse that many feminine men, whether gay, bisexual, asexual or straight, have had to endure from the straight community and certain sections of the LGBT community.

The American writer Dan Savage, who co-created the "It Gets Better" campaign to tackle the issue of suicides amongst gay teenagers who were being bullied because of their sexual orientation, put it succinctly: "It's often the effeminate boys and the masculine girls, the ones who violate gender norms and expectations, who get bullied."

I contemplated these issues as I toiled with my dress to the photographer's studio. The outfit was heavier than I expected and I was sweating by the time I arrived. After I mopped myself down and gathered myself together the makeup artist helped me get into the dress. As she laced my corset I thought how strange it was that I, an African man living in the 21st century, would willingly strap myself into the kind of constricting garments that European women had fought so hard to resist a hundred years ago. I remained ambivalent until my makeup was done, until I glanced in the mirror and saw something I had never seen within myself before: a sense of poise, daring even. I had morphed from a shy, timid young man into someone who was bold, unafraid to take risks. I stood before the camera and gazed directly at the lens. There was no need for validation. The photographer didn't have to give me directions. I knew what I was doing. I struck confident pose after pose, proud of the fact that there was a hard-won sense of power in my femininity.

To find out more about Diriye Osman and his work, visit his website: www.diriyeosman.com