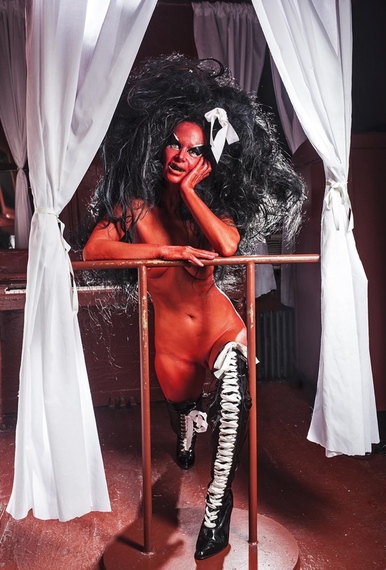 Kembra Pfahler in The Voluptuous Horror of Karen Black. Photo by Ricardo Nelson.

Kembra Pfahler is a downtown legend: a punk rocker, screen goddess, curator, and performance artist who moved from Los Angeles to the East Village in the early 1980s. Over the course of her time in New York, she's modeled for Calvin Klein, sings lead in the death punk metal band The Voluptuous Horror of Karen Black, and founded a performance art movement known as "Availabilism," the tenet of which is to use whatever's around at any given time to create performance--as an expression of some ineffable part of oneself. In Kembra's case, she's strapped bowling balls found on the street to her feet, cracked eggs from an otherwise empty fridge on her vulva, and used Grindr to post close-up pictures of her face in blue body paint and a bouffant black wig--which is probably how you recognize her, horny gay men of the East Village. In her most famous performance, which she did for Richard Kern's Sewing Circle in 1992, she had her vagina sewn shut by an Asian woman--performance artist Lisa Resurreccion--while wearing nothing but a "Young Republicans" t-shirt. When asked why she did it, she told DisinfoTV: "I just told my mother I was very upset." There's a deep rage in Kembra's work at the way the female body is treated by society.

Brienne Walsh: How old were you when you got here?

BW: And did you come here for school?

KP: I came to go to the School of Visual Arts. I studied under Mary Heilmann and Lorraine O'Grady. They were the most inspirational. Recently, I featured them in a show I was a part of called "Future Feminism," at the Hole. We were able to invite Lorraine to do a night of performance. That was last year--last September--and I'm still recovering from that. It took me a year to physically and mentally recover from that show.

KP: It was like stepping onto a battlefield. I lost half my friends for doing work about feminism, and using a kind of language that came to us out of consensus discussions during retreats that Antony [of Antony and the Johnsons], Coco Rosie, Johanna Constantine, and I had. We talked in a circle and had discussions that lasted weeks and days and hours. And we decided that through these discussions, we wanted to have an art exhibit showing stones with thirteen tenets on them, and the thirteenth tenet was "The Future is Female." That caused the most controversy because it was gender specific. It was a decision we made because the scales had been so tilted towards just the male gender. But a lot of our friends are so advanced that they don't want to speak about gender at all, they want to go to the other category, to stage 3, stage 4, stage 5, stage 6, stage 7. Recently, in the medical profession, the little boxes you could check for gender--there used to be four categories--will next year have ten: male, female, trans, LGBT, bisexual, asexual... so there's going to be a lot of development in other sexualities. To me it goes back as far as Rilke's Letters to A Young Poet, when he says in the first letter that sexuality is personal, and everyone's entitled to their own expression of love and sexuality, whatever that may be, and you can't compare or generalize. I'm not an academic feminist. I've been in a death rock band. I wasn't in the art world from 1989-2000, I was on tour across the country doing Karen Black shows where no one wanted them.

KP: I chose to go across the US rather than Europe because I was appalled by this cliché that "they will like you more in Europe, they like artists more in Europe," so we said, "Let's go to Minnesota, let's go to Oregon, let's go to where we aren't going to be teaching to the already-converted." And we did cross-country Winnebago tours with The Voluptuous Horror of Karen Black for over a decade. And before that I made films from '79 to about '89--I made films and did performance in this neighborhood, and grew up with Jonas Mekas, Millennium, Mike Kuchar. Jack Smith lived up the street, and we had The Living Theater on 4th Street. It's like different decades have been different aspects of my life, as I've gotten to have different kinds of educations. To me, it's just a privilege to even still be walking, because I saw everyone die of AIDS in the '80s, as you did, even as a little girl.

BW: Yeah, I remember a little bit, but not so much. I actually have a cousin who survived, and he's still alive, which is interesting. I just went to his wedding. I've never gotten the story from him, what happened, how he survived. But I talked to him while I was down there; he lives in Arizona now.

KP: Good news! People don't like to talk about it.

KP: It's not dinner conversation.

BW: It must've been traumatic in the East Village, because I assume so many people were sick here.

KP: It was a holocaust. So when people are having art problems now, and they wake up in the morning and they're worried that they don't have a gallery to support them, or no one recognizes them, I think to myself, we are not living through an AIDS crisis right now, even though we're still living with AIDS. This isn't Auschwitz. It's a privilege and a luxury to even have the freedom to worry about being in a gallery.

BW: Do you feel like artists in New York have less to say than when you first moved here? I was in South Africa last week, and the gallery director was from the Netherlands. He said, "You know what a twenty-year-old artist in Amsterdam has to say? That everything is so easy for them. But a South African artist has so much to say." I don't know if you feel like maybe New York artists have less to talk about--maybe not people who've been here a long time, but younger ones who are just moving here.

KP: Well that would be ageist, to presume something lacking in years would have less to say. And ageism is the same as sexism and racism, and we don't know who's going to save the world. It could be a sixteen-year-old computer-game player. Until laws are created to protect women from harm and until misogyny is eradicated, we will have something to say, every day.

Read the full interview on BOMB.

Artists in conversation, since 1981. Quarterly in print and every day online.