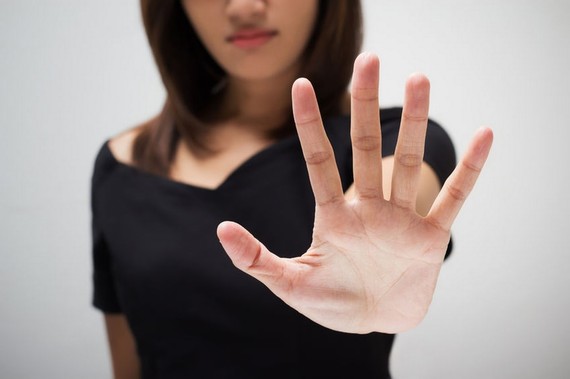 While growing up in Puerto Rico, I barely had any knowledge on feminism. I was always told that I should grow up to be an independent woman with her own career, yet that was the extent of any feminist ideals that were discussed in my household. During my childhood, all I knew about feminists was that they burned their bras--which is completely false. I erroneously believed that the need for feminism was an archaic concept, since women were able to have the same job opportunities as men.

At the age of fifteen, I noticed that my male peers objectified me, rather than treating me with the respect I deserved. At that age, I thought it was very important to have a boyfriend, as it seemed to be the top priority for girls my age. Girls were pressured into being in a relationship at that age and would be teased in school if they had never had a boyfriend. Since I desired to fit in and wanted to feel loved, I entered a relationship with a boy who was a couple of years older. It was my first relationship and also the first time that I had ever feared my safety.

I was forced to deal with situations I had never dealt with before. He treated me as if I was his property and threatened to end his life if I ever left him. He would often try to put me down and make me think that he was the only person who could ever love me. He wanted me to leave my family and dedicate my life to him. I wanted to get out of the relationship, yet didn't know how. I spiraled into depression, which allowed my parents to notice something was wrong with me. I was basically a zombie. I barely had energy to even leave my room. When my mother noticed something was wrong with me, she asked me what was going on. With the help of my mother and my therapist, I was able to break off the relationship.

Even after dealing with an emotionally abusive relationship, I experienced a few other instances in which men tried to take advantage of me. I then realized that women were not treated as equal as I thought they were. I learned that other girls had dealt with similar issues, yet they felt like those issues were normal. It seemed like there was barely any support for women who dealt with abusive relationships similar to mine that involved emotional abuse.

Soon afterwards, I stumbled upon articles discussing feminism and what it entails. Women of a variety of races, ethnicities, and social-economic classes are still affected by patriarchy. I learned that millions of women had experienced some sort of abuse, whether it's emotional, sexual, or domestic. Feminism helped me feel empowered and reminded me that I deserved to be respected and listened to.

However, the concept of feminism was still foreign in Puerto Rico. I went to an all-girls Catholic high school, which is among the top high schools in the island. Despite the opportunities provided within my high school and the high rate of students who ended up going to elite colleges, feminism was still seen as a term worthy of disgust.

During my senior year, one of my professors decided to discuss feminism in class, despite it not being related to the subject we were studying. He asked us if we knew what feminism was. He erroneously informed us that feminism was the same as misogyny. While I tried to explain that there are different types of feminism and feminists do care about men's rights as well, my classmates told me to shut up and discussed how disgusting feminists are.

Experiencing this made me realize that many young girls and women are misinformed about the true meaning of feminism. They are taught that the stereotype of "hairy, man-hating feminists" is real when it's far from the truth. Latinas need feminism. We are the ones who are most affected in the wage gap and are also among the most affected by domestic violence, among other issues.

Fortunately, many young women in the island are becoming more aware of the importance of feminism thanks to the internet and the sudden boom of pop culture icons speaking out about their identities as feminists. While this may help women become more vocal about the patriarchal issues in the island, we still have a long way to go.