Just down the street from Fudan University, one of the top colleges in China, and across from a massive shopping complex that has a Wal Mart, a couple of Starbucks and KFCs, H&M, Sephora and Zara, among other Western brands, lives Feng Zhenghu who for 24 hours a day, 7 days a week is barred from leaving his home.

In 2009, Feng garnered international media attention when he lived in Tokyo's Narita Airport for several months after the Chinese government repeatedly stopped him from entering the country. He eventually was allowed to return to his apartment in Shanghai in 2010 and since then has faced random detentions in his home, which is also regularly searched for contraband by police.

"I don't know if there is any surveillance in my house, and I don't care," said Feng who is reachable via mobile in his apartment, which is just a couple of buildings away from mine in a complex that has a fish pond, palm trees and a playground. "My phone is recorded, my computer has been taken. They can come to my house anytime without notice as they please. I have no privacy at all, and it is all public to them."

Feng has become an enemy of the state for the work that he does to educate petitioners about their rights under Chinese law.

China has hundreds of thousands, perhaps even millions, of petitioners, or people who file grievances with the government against local officials for abuses ranging from corruption to forced land acquisition. They are usually poor, which means they cannot hire lawyers to help them solve their cases, which are also rarely ever heard in local courts. This means that most petitioners make dozens of trips to Shanghai over the course of many years to try to find someone powerful in the central government to help them find justice. Most never find any help at all.

The dissident has made it his mission to push local courts to not dismiss cases from petitioners as well as help petitioners write court documents or other papers outlining their particular complaints. And for this, he has lost his freedom.

In the beginning, when I moved into my apartment back in 2010, the security apparatus was barely noticeable. There were always some random men who looked like the type of men who might be found late at night in a stale diner in a casino in Atlantic City. Thuggish. Gold chains. Greasy hair. One had a broken arm.

They would sit at the gate and smoke. After a while, they started talking to me. Offering me cigarettes. I would stand around and chat about America. It was a good way to practice Chinese. I thought they were part of the complex's management team. Once I asked what they did, and they replied that just had some sort of random business to do in the neighborhood. I thought nothing of it. Nor, it seemed, did anyone else who lived around me.

I discovered who the men were and why they were there only a few months ago when a Chinese friend of mine who worked for a foreign news agency came to interview Feng. The police arrived to stop him and the foreign reporter from entering Feng's building so they came to my apartment for tea. Since then, I have been in touch with Feng via phone to ask him some questions surrounding some stories I have been working on about black jails in China and to ask him about what it is like to be in prison in his home.

"If I escape, those guards, the local public security bureau chief, the district governor, all of them will lose their jobs," he said. "I have been with them for two years, and I understand them. It is also hard for them, so I don't want to try to run away. Summer is coming, and I worry for them. The sun and mosquitoes are coming, and they have to stay outside. It is a pretty hard life for them as it is for me."

Since the blind Chinese dissident Chen Guangcheng dramatically escaped from house arrest in a rural village in northern Shandong Province at the end of April, the layers of security surrounding my apartment complex have multiplied. The guards are still at the gate. But now there are more who hang around all day near the entryway to Feng's building. There are new security cameras by the entrance. This week, new ultra bright lights were installed on the grounds.

And now in front of Feng's building is a police car round-the-clock. I walk by it everyday. On my way to go buy coffee or cigarettes or a newspaper, I peer inside the tinted windows where I see bored officers watching something on their mobile phones. The car is always on. Sometimes there are people sitting in the backseat. Sometimes there are not. Sometimes everyone inside is asleep. Sometimes they sit outside a small tea shop and watch me pass. One night, one even said hello.

Back in April, before the police car arrived out front, my news assistant and I called Feng early one morning. We said we would come to see him from the street. He walked to his window and briefly peered outside. We snapped a photo. He dropped us a package with a note that said he is allowed to walk outside in the afternoon for half an hour for fresh air, and that maybe we could see him then.

Via phone, Feng told us that, unable to take the constant surveillance, his wife has moved to Germany.

"My life has become worse after her departure," Feng said. "I cannot even go out to buy food. I rely on visitors to bring me food, and I cook a lot at once, and just eat the leftovers for meals."

Georgie is a neighbor who visits Feng when he is let out of his apartment in the afternoons. Over the years, Georgie has developed a rapport with the guards, which now number at nearly 20 or so. He says they are migrant workers from provinces around Shanghai and make a couple thousand yuan per month to monitor the dissident. When Feng is let out, he talks to the guards about current events or cooking.

They talk about "how to stay healthy or what kind of television they are watching or how to cook fish. That was yesterday's topic," said Georgie who requested his full name not be disclosed out of fear that he would no longer be able to visit Feng anymore.

"Some of them, they have a good relationship [with Feng]," he said. "The guards just consider this as any other job."

The degree to which my neighbors are aware that their neighbor is a dissident who is in prison in his home is unclear. There are daily rhythms of life here. Cars come and go. Children play soccer outside. Elderly men walk their dogs. Women sit around the fish pond and chat in the evenings. Every time I enter the gate, I look left towards Feng's apartment and wonder what he is doing, whether he will ever get out and whether, for me, if it would have been better to never know that he was there at all.

"They are very worried right now that in Shandong a blind person could escape such heavy security," Feng said. "They afraid that I might run away too, and then they will lose their jobs. So their days are not easy right now."

Special thanks to Jack Zhang for helping with translation and legwork for this blog post. 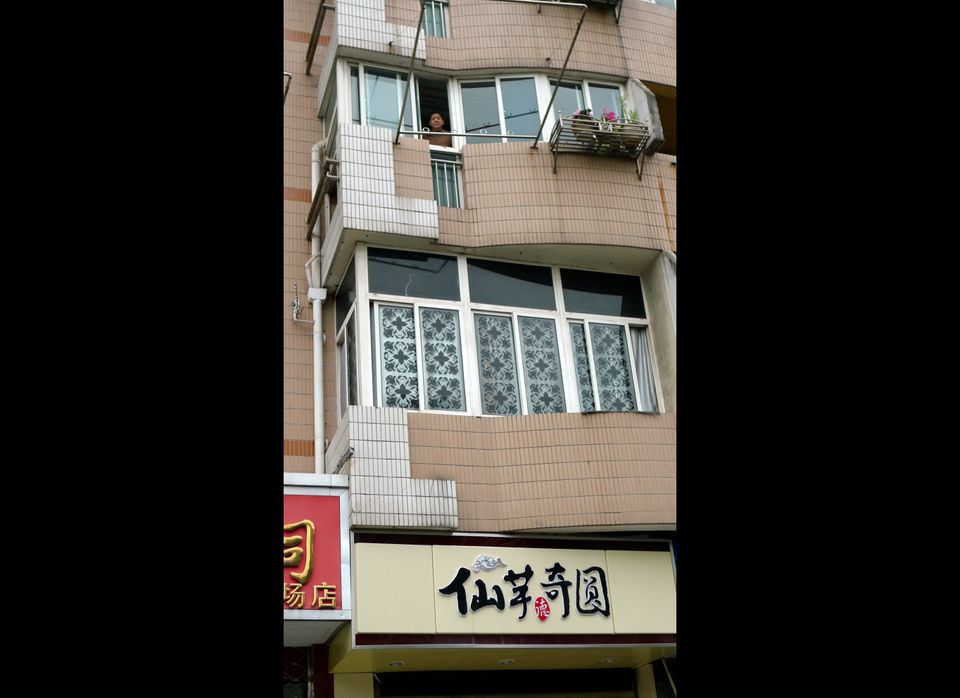 1 / 5
Feng Zhenghu In His Apartment
Zhenghu is confined to his apartment.
Lara Farrar