UPDATE 9:26 P.M.: Police Chief Aaron Jimenez has confirmed with The Huffington Post that the officer making threats in videos shot by protestors is Lieutenant Ray Albers.

UPDATE 5:16 P.M. : The St. Ann Police Department has released a statement saying the officer involved in threatening protestors has been "suspended indefinitely."

Video taken Tuesday night during protests in Ferguson, Missouri, show an officer pointing his weapon at civilians, shouting: "I will fucking kill you."

Two separate videos uploaded to YouTube on Wednesday show the officer pointing a rifle at protestors.

"Gun raised, gun raised and pointed," a protestor shouts out, alerting others as the officer approaches closer.

"My hands are up," another protestor says.

"I will fucking kill you, get back!" the officer shouts.

Another protestor asks for the officer to identify himself.

"Go fuck yourself," the officer replies.

In another video, protestors can be heard shouting at the officer to lower his weapon. At least one other cop can be seen trying to deescalate the situation by placing his hand on the weapon to lower it.

The officer, who has not yet been identified, can be seen wearing a St. Ann Police Department badge. Phone calls to the department were not immediately returned. 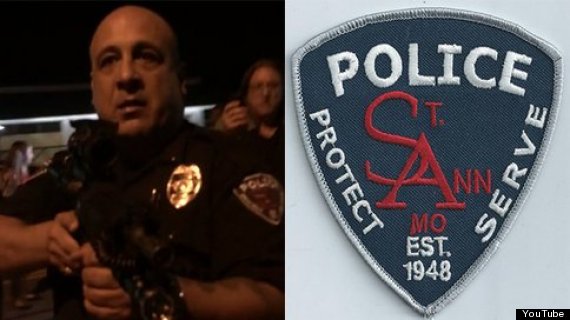 On Twitter, the ACLU of Missouri claimed that the officer has been removed from duty.