Anger erupted outside the police department headquarters when what was long feared by many Ferguson residents was made official: There would be no charges against Wilson, the 28-year-old officer who shot unarmed teen Michael Brown, Jr. to death in August after a confrontation.

Around a thousand protesters gathered on Ferguson's main street, and they were noticeably shaken even before the announcement when Brown's mother called out in agony for her son while on top of the roof of a car. 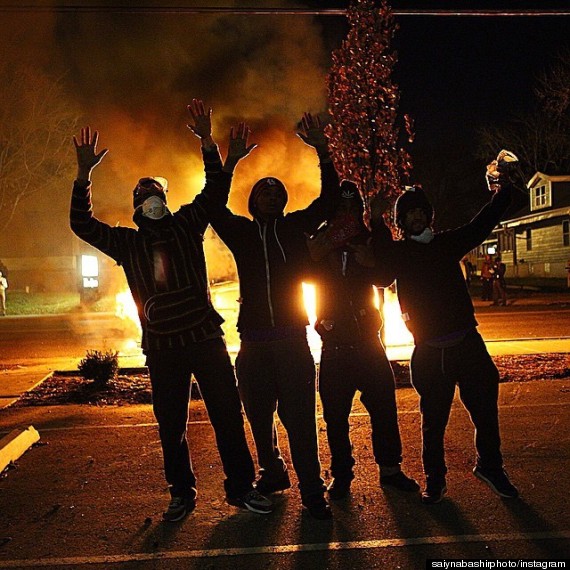 Protestors stand in front of a burning police car in Ferguson, MO. (saiynabashirphoto/instagram)

"Y'all know y'all wrong," Lesley McSpadden shouted at police.

The Brown family had called for peaceful protests in a statement -- but not everyone assembled would heed their wishes. McCulloch's

Law enforcement officers responded with orders to disperse. At the same time as President Barack Obama addressed the nation, the police filled the air filled with teargas, sickening protesters and journalists. 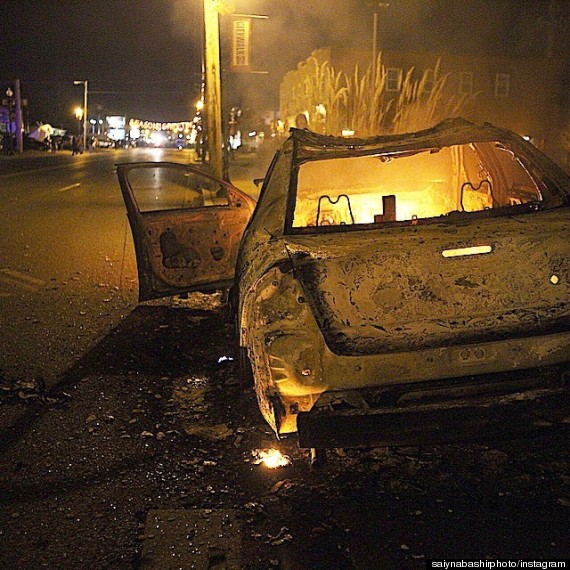 Across the town's railroad tracks on West Florissant Avenue, a street much closer to where Brown was shot that became the focal point of protests in August, police briefly ordered protesters off the streets. As the police left, a handful of protesters smashed the windows of a McDonald's. A beauty supply store was one of the first businesses to go up in flames.

Police responded in full riot gear and in armored vehicles. "They look like they're getting ready to roll into Fallujah," one protester told the Wall Street Journal.

Gunshots filled the air on West Florissant. The situation became so intense that some airplanes were even diverted by the Federal Aviation Administration from the Lambert-St. Louis International Airport, miles away.

"Officers are obligated to protect life and property," the St. Louis County Police Department tweeted from its official account, which throughout the night sent out updates about looting, fires and gunfire.

"I've had police point guns at me twice tonight," tweeted St. Louis Alderman Antonio French, a frequent presence at protests for the last few months. "I pray we get through this night without anyone getting hurt."