Ferguson, Missouri, is waking up to a city that is still smoldering after a night of unrest following a grand jury's decision not to indict officer Darren Wilson in the shooting death of Michael Brown.

At least a dozen buildings were torched and looted, many of them local businesses that police said were total losses. Dozens of cars -- including two police cruisers and rows of vehicles at a car dealership -- were also vandalized and left charred. St. Louis County Police Chief Jon Belmar said he heard about 150 gunshots, none from police.

"What I've seen tonight is probably much worse than the worst night we had in August," he said, referring to the summer protests after the shooting death of Brown, an unarmed black teenager who some witnesses say had his hands up when he was shot on Aug. 9.

Police said they made more than 80 arrests, and that there were only minor injuries.

Shortly after St. Louis County Prosecuting Attorney Robert McCulloch made the rambling nighttime announcement, Wilson's grand jury testimony was released, in which he claimed Brown looked like a "demon" during the deadly confrontation. 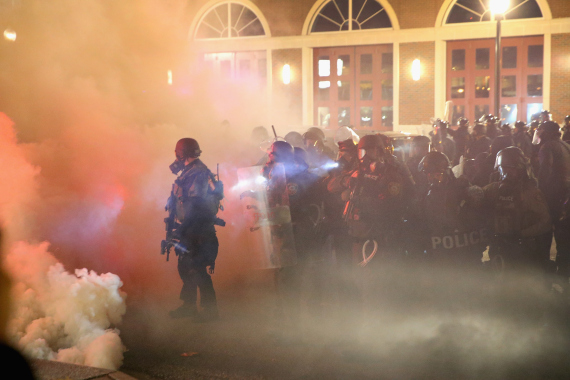 "I mean it was, he's obviously bigger than I was and stronger and the, I've already taken two to the face and I didn't think he would, the third one could be fatal if he hit me right ...Or at least unconscious and then who knows what would happen to me after that," Wilson said during his grand jury testimony.

The prosecutor’s office also released photos of Wilson taken after the incident that show his injuries from the confrontation, which appear to be a bruise on his face and a mark on his neck. The photos, which were used as evidence in the proceedings, had not been previously released to the public.

Other grand jury evidence released overnight reiterated witnesses' firm beliefs that they saw Brown throw his hands up before he was shot.

As about 1,000 vocal protesters gathered on Ferguson's main street to learn the grand jury's decision, Brown's mother, Lesley McSpadden, cried out in anguish while standing on top of a car.

"Everybody wants me to be calm," she said. "Do they know how those bullets hit my son? What they did to his body as they entered his body?"

Brown's family also released a statement, which read in part:

"We are profoundly disappointed that the killer of our child will not face the consequence of his actions. While we understand that many others share our pain, we ask that you channel your frustration in ways that will make a positive change. We need to work together to fix the system that allowed this to happen."

As President Barack Obama spoke to the nation and appealed for calm, the tense demonstrations were already starting to boil over into violence.

On West Florissant Avenue, a focal point of summer protests, police ordered protesters off the streets. But once police left, some smashed the windows of a McDonald’s and others set fire to a beauty supply store and other businesses.

This map shows the location of many of the businesses that were burned:

The unrest in the wake of this news wasn't limited to Ferguson and the surrounding area. Protests also sprung up across the nation. In New York, demonstrators crowded into Times Square and someone sprayed fake blood on NYPD Commissioner Bill Bratton.

Also in the city, protesters shut down at least three major bridges while decrying other police-involved shootings.

Politicians and community leaders and change-makers alike pleaded for peace. But fury had already spread across the United States.

In Seattle, protesters reportedly threw rocks at cars and eventually shut down I-5. Others linked arms at 12th and Pike:

In Los Angeles, protesters took to the streets and at one point tried to take to the freeway:

Ferguson protesters try to walk up off-ramp to 10 Freeway at La Brea but are blocked by CHP http://t.co/S5I8A8NBPJ pic.twitter.com/5TXB3wqnTi

However, it's in Ferguson where by far the most devastating damage took place.

With reporting from HuffPost's Ryan Reilly, Matt Sledge and Mariah Stewart in Ferguson, Carly Schwartz and Christopher Mathias in New York and Jennifer Bendery in Washington.