Soon after Officer Darren Wilson shot and killed Michael Brown, an unarmed 18-year-old, law enforcement’s handling of the case was already being criticized as callous and sloppy. Residents of Ferguson, Missouri, looked on in horror as police officials failed to cover and later to remove Brown’s body from the street for hours.

Now that the grand jury evidence, including forensic records and testimony from Wilson and those investigating the fatal shooting, has been released, it's clear that other mistakes were made in attempting to figure out what happened on that August afternoon. The best physical evidence and testimony might not have been as ironclad in Wilson's favor as prosecutor Robert McCulloch characterized it on Monday night.

From the reams of grand jury testimony and police evidence, here are some key points that, if this case had gone to trial, could have been highlighted by prosecutors (not including the witnesses who appeared to contradict Wilson’s testimony):

In an interview with police investigators, Wilson admitted that after the shooting he returned to police headquarters and washed blood off his body -- physical evidence that could have helped to prove or disprove a critical piece of Wilson’s testimony regarding his struggle with Brown inside the police car. He told his interrogator that he had blood on both of his hands. “I think it was his blood,” Wilson said referring to Brown. He added that he was not cut anywhere.

2. The first officer to interview Wilson failed to take any notes.

The first supervising officer to the scene, who was also the first person to interview Wilson about the incident, didn’t take any notes about their conversation. In testimony more than a month after the incident, the officer offered his account from memory. He explained that he hadn’t been equipped with a recorder and hadn’t tried to take any written notes due to the chaotic nature of the situation. He also didn’t write up any notes soon after the fact. “I didn’t take notes because at that point in time I had multiple things going through my head besides what Darren was telling me,” the officer stated.

The same officer admitted during his grand jury testimony that Wilson had called him personally after they both had been interviewed by investigators. Wilson then went over his account again with the officer. The officer told the grand jury that there were no discrepancies between Wilson’s first account in person and his second account on the phone. But the call raises questions about whether Wilson may have influenced witness testimony.

3. Investigators failed to measure the likely distance between Brown and Wilson.

An unnamed medical legal examiner who responded to the shooting testified before the grand jury that he or she had not taken any distance measurements at the scene, because they appeared “self-explanatory.”

“Somebody shot somebody. There was no question as to any distances or anything of that nature at the time I was there,” the examiner told the jury.

The examiner also noted that he or she hadn’t been able to take pictures at the scene -- as is standard -- because the camera's batteries were dead. The examiner later testified that he or she accompanied investigators from the St. Louis County Police Department as they photographed Brown’s body.

4. Investigators did not test Wilson’s gun for fingerprints.

Talking with police investigators and before the grand jury, Wilson claimed that Brown had grabbed at Wilson's gun during the initial incident in the police car and that Brown's hand was on the firearm when it misfired at least once. Wilson also told police that he thought Brown would overpower him and shoot him with his own gun. “I was not in control of the gun,” Wilson said. Eventually he regained control of the weapon and fired from within the car.

Investigators could have helped to prove or disprove Wilson’s testimony by testing his service weapon for Brown’s fingerprints. But the gun was not tested for fingerprints. An investigator argued before the grand jury that the decision was made not to test the weapon because Wilson “never lost control of his gun.”

5. Wilson did not immediately turn his weapon over to investigators after killing Brown.

A detective with the St. Louis County Police Department, who conducted the first official interview of Wilson, testified to the grand jury that Wilson had packaged his own service weapon into an evidence envelope following his arrival at the police station in the wake of the shooting. The detective said the practice was not usual for his department, though he was unclear on the protocol of the Ferguson Police Department. He said he didn’t explore that aspect further at the time.

According to the detective’s testimony, standard practice for the St. Louis County Police Department would be for an officer involved in a shooting to keep his or her weapon holstered until it can be turned over to a supervisor and a crime scene unit detective. While that clearly didn’t take place in Wilson’s case, the detective also testified that he believed the firearm was handled in a way that preserved the chain of custody. 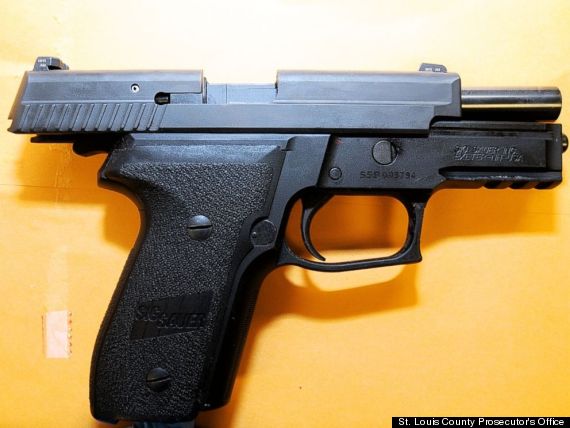 6. An initial interview with investigators was delayed while Wilson traveled to the hospital with his superiors.

The same St. Louis County Police Department detective also testified that while he had intended to conduct his initial interview with Wilson at the Ferguson police station, a lieutenant colonel with the Ferguson Police Department decided that Wilson first needed to go to the hospital for medical treatment. The detective said that while it is common practice to defer to any medical decision of this nature, Wilson appeared to be in good health and didn’t have any notable injuries that would have prevented an interview from being conducted at the station. Wilson would also testify that he didn’t believe he needed to go to the hospital.

But that day, Wilson got into a vehicle with the lieutenant colonel and another Ferguson police official and went to the hospital, while the St. Louis County detective traveled in another vehicle.

7. Wilson’s initial interview with the detective conflicts with information given in later testimony.

In his first interview with the detective, just hours after Brown’s death, Wilson didn’t claim to have any knowledge that Brown was suspected of stealing cigarillos from a nearby convenience store. The only mention of cigarillos he made to the detective was a recollection of the call about the theft that had come across his radio and that provided a description of the suspect.

Wilson also told the detective that Brown had passed something off to his friend before punching Wilson in the face. At the time, the detective said, Wilson didn’t know what the item was, referring to it only as “something.” In subsequent interviews and testimony, however, Wilson claimed that he knew Brown’s hands were full of cigarillos and that fact eventually led him to believe Brown may have been a suspect in the theft.