FERGUSON, Mo. -- Sonny Dayan owns a cell phone store that was looted early Saturday morning amid protests related to the death of unarmed teenager Michael Brown. Police released a video Friday allegedly showing Brown robbing a convenience store, sparking fresh outrage in the already tense town. The Ferguson police chief said on Friday afternoon that Brown was not stopped in connection with the alleged robbery, but rather because he was walking in the middle of the street.

We left at 7:30 p.m. Nothing was happening. It was quite quiet. There were a bunch of police across the street at the liquor store. At that point I assumed I’m probably the safest store around -- I had 60 police officers across the street from my shop. 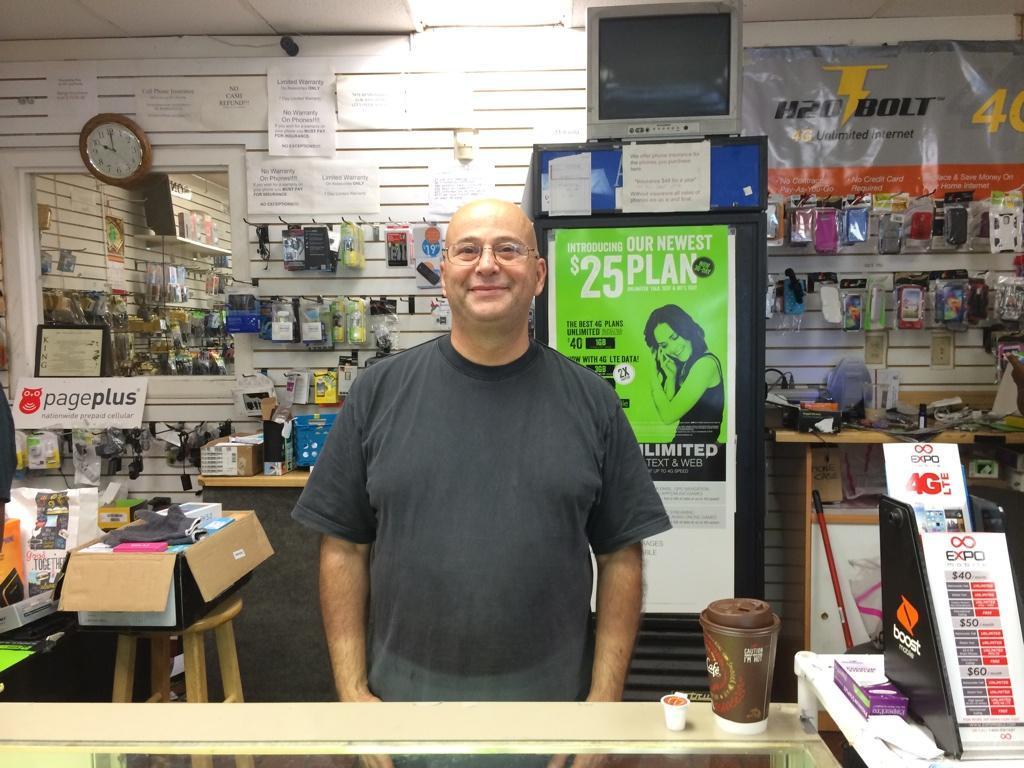 Sonny Dayan in his cell phone store, which was looted early Saturday morning.

We got some advisements from people from the neighborhood that said that they heard something, that you know maybe I should board it tonight. But I just didn’t believe it. I’m here 17 years. ... So I had faith in the community, and indeed it wasn’t the community -- it was just a couple of, you know, bad guys, I don’t know what to call them. But they were drinking all over the store. They stir drinks, they come here, vodka was everywhere, soda was spilled everywhere. I mean you should have seen the store this morning. Man, a mess!

So in that sense I was a little surprised. I’m not used to somebody robbing me, coming into my establishment and staying there as long as they need to and deciding when they want to leave, not when it’s time to leave. ... There’s been four break-ins in here, so it’s not my first time, and it’s not a big deal. But most of the time it’s minor, a door here, a door there, they call Ferguson, they come here, they save the day. This time around, the alarm company called Ferguson and said there’s movement inside the store, the officers said we can’t do anything. There’s riots going on and there’s troopers out there.

I had to immediately come over here, and I tried to get into the area. I couldn’t get into the area because the whole area was blocked. And I was like, 'People are robbing my store, can I just go and put some boards on it?' They did try, but then in the middle they changed their mind and said no, it’s too risky or something, please wait. They took my information and told me they’re going to call me as soon as the area is clean. That was about 1:45, 3:45 a.m., I’m just waiting.

Nobody calls me, so I just decide to come over. So I get here around 5, 5:30 a.m. There are a few people outside, some reporters were outside too, but the whole store was open, people could come in and out and take what they want at their leisure.

So that’s on the sad part. The good part is the people who were out here were waiting outside, they wanted to help me. So as soon as I got here, they said ‘Can I help you? Can I do this, can I do that?’ I wanted to take my time and clean as part of my therapy, as part of dealing with the situation. But some of them would not leave unless they did something to help, unless they got a hug or something. So that was very overwhelming, I didn’t think I’d come in there to be so overwhelmed by the community. So that’s very sweet.

I want to go back to normal. I’ve got to pay bills. I don’t have the luxury to be closed for weeks.

I don’t have a big insurance on this place. The whole concept of the store is modesty. So our prices are modest, we are alternative, so we’ll sell you a cheaper phone or a phone you would buy somewhere else, we’ll sell it to you a lot cheaper.

So we don’t have fancy-shamancy insurance because we don’t need to spend thousands of dollars on insurance. ... I’ll be covered for my expenses, the damages aren’t that extensive, thousands, maybe $5,000, $6,000. Manageable. We’ll live. It’s not the end of the world.

I just want things to go back to normal somehow. Wait for that positive to float and stay afloat, you know. Right now you see it, you know they’re there, a lot of good folks in the neighborhood, you see there here and there, but you will hope that they will come out and stay out.