WASHINGTON -- "LAND OF THE FREE? Insane situation in the US right now," blared the headline on the Murdoch-owned Australian news site News.com.au on Thursday.

Twitter user Bunmi Laditan took a screenshot to contrast the Australian reaction with what she saw in the widely circulated American newspaper USA Today. The headline in the latter paper that morning was, "Police seek order as Ferguson furor builds." Within six hours, her message had been retweeted almost 3,000 times.

Like the Australian site, the Russian outlet RT -- which is funded and largely controlled by the Kremlin and boasts a broad audience in the Global South -- has published an array of stories with headlines emphasizing how extreme the Ferguson situation had become.

The websites of the French channel France 24 and the English channel Sky News had disturbing Ferguson stories on Thursday as well. 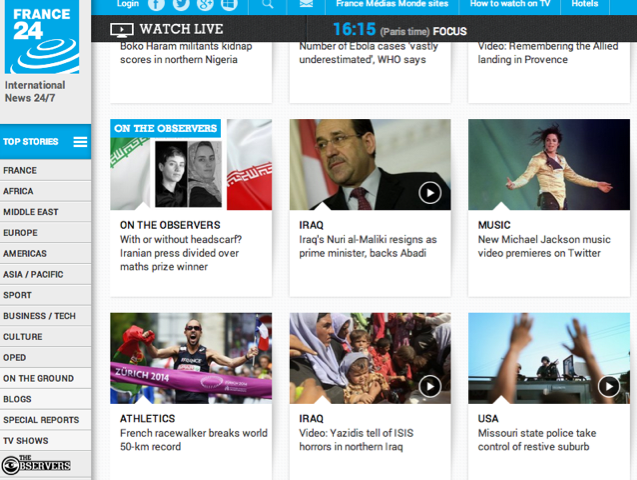 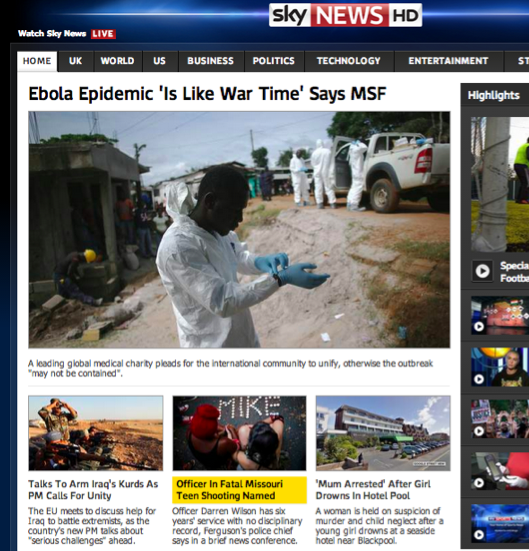 Le Monde, a leading French newspaper, called the Michael Brown case the "affair that's shaken the U.S." on its landing page. Even the normally sober BBC gave its social media roundup post on the ongoing crisis a jarring headline: "From Ferguson to 'Fergustan.'"

The BBC later changed that to the comparatively tame "Military tactics in 'US war zone.'"

As numerous social media users and commentators pointed out, the world was watching as one part of the U.S. began to resemble, per the BBC and a Toronto Star report, a "warzone."

International condemnation of American violence at home isn't something new. It pops up each time there's a widely publicized shooting, as commentators race to note that the U.S. has looser gun laws than most other industrialized Western economies. It's what other countries lean on to argue that the U.S. has no right to criticize their human rights records.

But the Ferguson chaos offered international observers the kind of American crisis they haven't seen for decades. The scenes of police in paramilitary gear, unarmed protesters with their hands up and civilians being subjected to tear gas -- which is banned in international warfare -- have made news around the globe. Cue comparisons to foreign conflicts and warzones -- and with good reason: The Washington Post identified seven different ways in which the tactics used and experiences of those in Ferguson reflected similar situations in countries that Americans have considered far less free than their own.

The global reaction extends beyond shock to sympathy, and even empathy from nations with their own widely reported internal conflicts.

Hang in there, brave people of #Ferguson. Solidarity and good night from #Cairo

Well-meaning as they are, the expressions of solidarity are also surreal: Citizens of some of the world's poorest countries are now in a position to pity and advise those in its richest. As the Post noted, Palestinian journalist Mariam Barghouti tweeted a series of tips on how to deal with tear gas based on her own experience in the West Bank. Using the popular hashtag #Ferguson, she suggested ways for protesters to clean off their faces. She also pointed out that the Ferguson police used American-made tear gas just as Israel has in Palestine.

@OccupyOakland spotted advice coming from another Middle Eastern source, a woman who had participated in last summer's protests in Turkey:

To some observers on social media, the entire situation seemed more Middle Eastern than American. The hashtag #Fergustan spread to suggest that similarity, the eerie blurring of lines between U.S. battlefields and the U.S. homeland -- right down to weaponry -- that RT identified with its "Iraq? Afghanistan?" headline. Jeremy Scahill, a national security correspondent for The Nation and The Intercept, took the #Fergustan idea one step further:

If they changed the name to Fergustan, the Obama admin might intervene

But that logic irked other social media users. Adding "-stan" to the name of an American town to emphasize its chaos implies this kind of violence is the norm in those countries whose names end in -stan, they pointed out. Straightforwardly acknowledging that this violence has happened in the U.S., they suggest, is the only way to address its root causes.

When you joke about “Fergustan", you attach police state identity to other places. We need to accept this is our identity too. #Ferguson

Not sure I get the idea of calling Ferguson "Fergustan." Is it like, "Silly rabbit, ham-handed US military belongs in *Muslim* countries!"?

The consensus among commenters from abroad was that with this civil unrest, the U.S. had showed -- once again -- that, despite its moral leadership on some fronts, it is far from perfect. The Afghan women's rights activist Noorjahan Akbar summed it up by tweeting:

For British science fiction author Jonathan Courtenay Grimwood and others, it seemed time for the U.S. crisis to be dealt with the way Washington often demands that crises in other nations be handled:

That likely won't be the outcome. Whatever the resolution in Ferguson is, the world will be watching to see how the U.S. fares and whether it sticks to its principles.