Ferguson police shot another Black man, 18-year-old Mansur Ball-Bey, as he allegedly turned a gun on them. A police autopsy shows he was shot in the back. Demonstrators continue to mark the anniversary of the shooting of unarmed Mike Brown--and each ensuing tragedy.

Blood is being spilled in our country at an alarming rate. Deaths at the hands of police, shootings in movie theaters, churches, on the street, and in our homes are becoming standard fare in our news headlines. We care, but tire of the pain and are stunned by the lack of action.

When the Charleston church massacre happened, Americans tapped into our compassion and outrage enough to take down the Confederate flag. Shockingly, this did not translate into sensible gun laws.

When a Black, unarmed man is shot, in about two heartbeats from his death, police and media focus on how he might have provoked the attack. Our empathy is thwarted, our sympathy muted. Excuses proliferate. 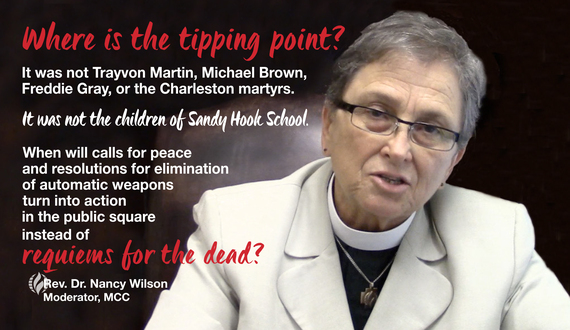 We are facing a New Intifada. Police are posting their own videos of demonstrators throwing bricks and rocks after the shooting of Mansur Ball-Bey. Calling Ferguson the New Intifada is not a rhetorical flourish. According to a report by independent journalist Rania Khalek, Ferguson Police bought "skunk spray" produced for the Israelis to subdue Palestinians -- an amalgam of chemicals that reek of rotting flesh, excrement, and garbage, and clings to your skin and clothes.

Khalek's report establishes that: "A November 14 purchase order obtained by Defense One through Missouri's open records law, St. Louis Metropolitan Police Department purchased 14 1.4 liter canisters of Skunk for $428 along with two types of portable skunk delivery canisters that resemble fire extinguishers. Among them were two refillable MK-46 HE canisters for $1,284, which can spray up to 60 ounces of Skunk as far as 40 feet away, and five single use MK-20 Titan canisters totaling $198.90, which can hold up to 20 ounces of skunk with a spray range of 24 feet."

The militarization of police such as in Ferguson, the massive arming of citizens, and new generations of militia such as the "Oath Keepers," merge with centuries of racism rooted in slavery and enforced by policing, housing discrimination, segregation, income inequality, and voter disempowerment brings us to this moment in history unlike any we have seen in 50 years.

Americans are locked and loaded. In Ferguson, predominantly White "Oath Keepers"walk fully armed with automatic weapons and munitions in the streets, and say they just want to defend the Constitution. Their website makes a point to say that military officer Oath Keepers do not pledge to obey the President of the United States. Their next plan in Ferguson is to arm 50 Black people with AR15 rifles for an "iconic event" where the 50 armed Black people will be "surrounded by Oath Keepers."

This is not an event to advocate for Black Lives Matter, it is a cover for their armed White racism. As the late, Julian Bond said, "America is race. From its symbolism to its substance, from its founding by slave holders to its ending by the Civil War ... from Emmett Till to Trayvon Martin and to Michael Brown."

Today, there are 319 million Americans and 300 millions guns among us. Mother Jones Magazine reported that there was an average of two mass killings per year since 1982, but 25 of the 62 cases occurred after 2006. In 2012 alone 140 people were injured or killed in mass shootings -- a record number.

In contrast, Australians mobilized a "buy back" of 600,000 semi-automatic shotguns and rifles after a 1996 mass shooting when 35 people died. Then, Australians made private sales of guns illegal. In 10 years, murder by gun dropped 59 percent with NO mass shootings; all homicides dropped from 350 to 250 per year.

In the United States, police training has ranged from police as social workers with guns in the early 1990s to using "broken windows" strategies that ended up targeting people of color for "stop and frisk" searches. It overwhelmingly targeted people of color, and was illegal and ineffective. Police quotas work to reinforce laws, which guarantee inmates to for-profit prisons. The combined result is astronomical rates of imprisonment -- particularly for men and women of color.

In 1996, Boston's Operation Ceasefire used a community-based policing method for gangs. Police would talk directly to gang members and warn them of the consequences of violence; church leaders and community groups intervened in gang conflict to minimize violence before it ever started. Simultaneously, repeat offenders went to prison. Harvard researchers documented a 64 percent reduction in youth homicides in five years.

I was part of a community policing program in Los Angeles as a Metropolitan Community Church (MCC) minister in a high-crime area and saw it work. Positive policing with community partnerships is one clear component of a challenge to structural racism.

But, there is oh, so much more that needs to be done. Our legislators refuse to do it. When the billion-dollar wars in Iraq and Afghanistan began, the money for community policing disappeared. In the recently-televised political debates, no presidential candidate addressed racism, gun violence, or the "Black Lives Matter" movement in any meaningful way at all. It doesn't matter to them that Black teens are 25 times more likely to be injured by a gun than White teens, and Native Americans face similarly high rates of gun violence.

Even more neglected are working class Whites who are manipulated to think that the government is their enemy and that buying guns is their patriotic duty. The result? The Washington Post analyzed data from the Center for Disease Control and reported that "A white person is five times as likely to commit suicide with a gun as to be shot with a gun.... States with the most guns per capita, such as Montana and Wyoming, have the highest suicide rates; states with low gun ownership rates, such as Massachusetts and New York, have far fewer suicides per capita."

The lack of sane, gun safety policy is a national disgrace and one more expression of racism and classism. Gun violence impacts people of color and poor people disproportionately. It is a public health crisis. While Donald Trump calls Mexican immigrants violent, the facts tell us that this is one more racist lie, designed to whip up a base with fear and hate.

Will someone please take the cameras off Trump, and turn them on the NRA? The NRA's insane insistence arming more people in churches, theaters, and schools will reduce violence could be called buffoonery if the consequences were not so dire. The NRA plays on irrational and racist fears to gain vast political power and is much more dangerous than Confederate flags, and far better funded.

Where is the tipping point? It was not Trayvon Martin, Eric Garner, Michael Brown, Tamir Rice, Walter Scott, Freddie Gray, or the Charleston martyrs. It was not the children of Sandy Hook School or the victims of the theater shootings. It was not the quiet shame and grief of all the families who have lost loved ones to gun suicide.

Is it too late for political climate change? Is the fresh air of civil society irretrievably toxic?

The parishioners in all of the churches in the United States and throughout the world that claim the name Metropolitan Community Churches are depending on me and each other not to give up hope. As the Global Moderator of these parishes, I depend on all MCC members--and all people of good will--to keep on being the voices in the wilderness crying out for this country to breathe life into its own society.

The fortitude of Julian Bond -- whose fellow state legislators voted overwhelmingly not to seat him in 1966--is a reminder, that if we persevere, our lives can count. We can live together in peace, but we have to have common sense gun laws. Can we simply make automatic weapons and assault rifles illegal? They were banned from 1994 to 2004 in the United States, but the law had an expiration date and was not renewed. Why?

Where are the voices of faith in the public health crisis of gun violence? When will their calls for peace and resolutions for elimination of automatic weapons turn into actions in the public square instead of requiems for the dead?

The bones of the prophets of old cry out against our lawmakers who let NRA lobbyists buy their votes and then hand assault rifles to our children.