ST. LOUIS -- The locations of demonstrators who descended on the St. Louis area over the weekend to push for national reforms regarding police brutality led to some heated confrontations with area residents.

The "weekend of resistance" known as "Ferguson October" was in response to the death of unarmed black teenager Michael Brown, who was shot by Ferguson Police Officer Darren Wilson while walking down the middle of a street in the St. Louis suburb in August. Protesters, who are calling for Wilson's arrest, spread out across the region, organizing protests in venues ranging from public buildings and a university to gas stations, casinos and even a political fundraiser.

Plenty of residents in the St. Louis area didn't want them there, and many weren't afraid to make that known. One man, who claimed to be a St. Louis police officer, threatened to "fuck up" a woman outside the Rams football game on Monday night, according to MSNBC's Trymaine Lee. (Schron Y. Jackson, a spokesman for the Metropolitan Police Department in St. Louis, said the man in the video "is not a St. Louis Police officer.") A young boy, whom many on social media identified as his son, eventually pushed him away from the crowd as the man yelled "Saint Louis PD, baby!"

This man ran into the crowd, with his young son pulling at his shirt yelling, "St. Louis PD Baby!" pic.twitter.com/2G0AIlbAPL

A female fan "nearly attacked a protester" outside the stadium, and her boyfriend dragged her away, Lee said.

"It's done, over with, shut the fuck up! Go the fuck home!" another woman yelled at protesters outside the game, according to video of the event. "You don't know shit!" she yelled, before being moved back by officers on the scene.

Elon James White, a stand-up comedian and host of "#ABlackShow," said he was hit in the face by a white protester outside the game.

Protesters also unraveled large signs inside the Edward Jones Dome, as the Rams took on the San Francisco 49ers.

The protests took place on what activists dubbed "Moral Monday." Demonstrators gathered at multiple venues, including Walmarts, St. Louis City Hall, casinos and more. In acts of civil disobedience, they loudly chanted about justice inside the buildings and lay down in the middle of streets. Dozens of protesters were arrested, including well-known activist Cornel West. The official police count stood at 49 people arrested by officers from the St. Louis County Police Department, Missouri Highway Patrol and Ferguson Police Department as of late Monday night.

"We went to repent of our own complicity in a racist system and to offer a chance for law enforcement to do the same," says Elle Dowd, 26, a youth missionary who was arrested during the morning demonstration for disturbing the peace.

Dowd was proud of her actions. "The heroes and leaders of this movement are the young black leaders I'm proud to follow, who do this day in and day out, even when media isn't here," she said.

Pictures from inside #walmart #moralmonday #fergusonoctober #Ferguson only press photographer in.

The Monday arrests capped off a weekend of demonstrations that included a massive protest in downtown St. Louis on Saturday, where Carl Dix, one of the founders of the Revolutionary Communist Party, spoke before hundreds of people.

"When they murdered Mike Brown, to the system it was just another black youth dead," Dix said. "The people of Ferguson stood up. They stayed in the streets for more than two months. Then they called to people across the country and put the police murder of black youth in front of everybody. Now what we need to do is build on that."

Several protesters were arrested during a demonstration at a gas station on Saturday night.

On Sunday night, a large crowd gathered at Chaifetz Arena, where younger protesters interrupted an older NAACP leader and demanded to hear from younger people who had been on the ground in Ferguson.

"I've been really impressed specifically with the younger people who started organizing," said Justin Miller, 34, who traveled from North Carolina for the weekend's demonstrations. "For a long time I've been waiting for the next generation to step up on all areas on social justice. A lot of the older generation has been trying to hang on to their fight; it was amazing to watch the youth speak up."

#FergusonOctober protesters and Cornel West gathered at the Clock Tower in center of @SLU_Official after march pic.twitter.com/3pVH4gEoRh

After the event at Chaifetz Arena, young demonstrators led a march to the heart of the St. Louis University campus, where a handful of activists remained to occupy the clock tower of the Jesuit school overnight. An activist, who would only give his name as EJ, said the group targeted the school because "it is a mostly all-white university known for its successful law school" and there was "no better place to put the movement on the forefront than here."

Students who left their dorm rooms to join protesters were celebrated with cheers and applause. Dennis Kress, 18, a SLU student who joined the marchers, ditched his midterm studying to absorb the atmosphere.

"This is history and I don't plan on going to sleep tonight. Hopefully, my professors will understand," Kress said.

On Monday afternoon, the "Occupy SLU" demonstrators remained, using a tent to shelter themselves from the rain. Next to the camp stood an upside-down American flag, which upset a student on his way to class.

He approached the flag, grabbed it and tried to flip it right-side-up, until an activist intervened and asked what he was doing.

"I'm sorry, I have to. My brother is a sergeant in the military," the student said as he held the flagpole. 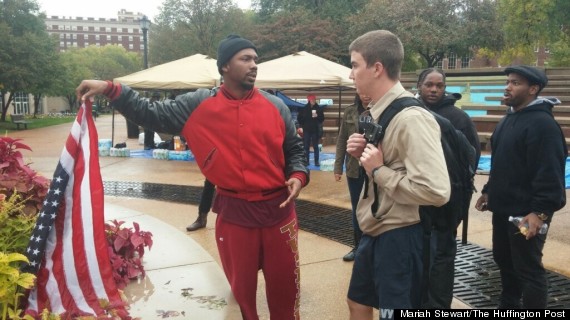 A student on his way to class was upset by an upside-down flag displayed by a group of protesters on the Saint Louis University campus. (Mariah Stewart/The Huffington Post)

Nearby, the father of a student -- who said he was on campus out of concern for his child's safety while protesters were there -- interjected. "What was wrong with what he was trying to do?" he asked.

"Mind your own business," the activist responded. The father of the student declined an interview, but said he was uncomfortable with the presence of the protesters.

This article has been updated with a comment from St. Louis police, saying that the man who claimed to be a St. Louis officer isn't.

As Ferguson Protests Spread, So Does Residents' Backlash Around St. Louis
Politicians React To Ferguson