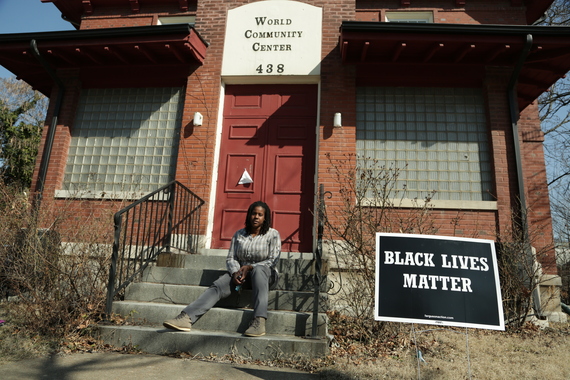 In dizzying speed last week, five officials in Ferguson, Mo. were removed in the wake of the Department of Justice (DOJ)'s scathing report about corrupt court practices. As the city government collapses like a house of cards, I was standing in line at the neighboring Maplewood municipal court, 15 minutes south of Ferguson. Here, the courts operate without interruption, free from the weight of public exposure.

The courtroom was full and the line to get in, made up exclusively of African-American residents, snaked through the corridors. In these courts many people walk in with traffic tickets and walk out with insurmountable fines or jail sentences. It is practices like this that fueled the DOJ's condemnation of neighboring Ferguson. In Maplewood and similar towns around Saint Louis, court fines can make up to 40 percent or more of their annual revenue, most coming from the poorest residents.

Change heralded by protests after the shooting of Michael Brown

These municipal courts have functioned like this for years. That it caught the eye of the DOJ is more a testament to the protests after the shooting of Michael Brown rather than a reflection of the efficacy of federal monitoring or an injustice for which the time of reckoning had simply arrived. The people of Ferguson demanded the world stop and look at their town, and didn't quit until that happened.

The lesson is that change does not come from Supreme Court declarations, or federal intervention, but is the cause and effect of everyday people bending institutions through the gravity of their collective power.

Standing in line at Maplewood, it is impossible not to wonder -- what if the collective action displayed in the streets to stop racial profiling and police violence were applied directly to the courthouses? What if this historic national movement looked at police agencies not as isolated actors, but as the first point of contact to a larger criminal justice system that has been insulated from public examination?

An entrenched problem of defense -- lack of access & resources

As a community organizer working with families whose loved ones are facing criminal charges, I have sat in courts across the country. The undeniable common denominator, even through an eye test (as documented in national statistics), is that despite geography, courthouses are filled disproportionately with people of color being processed to go to prison. Of those facing charges, 80 percent could not afford to pay for their own attorney and the plea rate is well over 90 percent. Very few people get their "day in court" in the way often mythologized by Hollywood.

Here in St. Louis, the ArchCity Defenders, the first to blow the whistle on injustices within the courts, represent the indigent and homeless; the unheard. ArchCity's Executive Director Thomas Harvey makes an observation about Ferguson that rings true across the nation, "If you're poor and black and standing in front of court saying, 'I can't afford this,' I think the court is less likely to listen to you."

In that packed Maplewood court, I was with an ArchCity Defender Stephanie Lummus and her client LaTricia, who had given birth to twins just three months prior, and was living in a shelter. Lummus was arguing to the judge to waive the fines for lack of proper registration. If she cannot prevail, Latricia will be paying those fines through her TANIF check -- money that would otherwise go to diapers and baby formula. Had Latricia not had Lummus by her side, the decision would have likely already been made.

The ArchCity Defenders, who are present in these courts each day and night, were the only defense attorneys in the courtroom -- everyone else was there without representation.

Witnessing the conveyer belt of convictions in Maplewood and other courtrooms, it is difficult to argue that the criminal court system is an area where constitutional rights are being exercised to mete out justice. Rather, it functions as an efficient delivery system for mass incarceration -- where the United States leads the world with number of people behind bars, holding over 2 million of its residents.

As rallies across the country voice a common refrain "Ferguson is everywhere", the same rings true about the failure of our courts.

How can we fix a broken justice system?

After just about every court hearing I've witnessed, families -- in the parking lot, in the car, or at home -- will typically ask for one wish. That wish is not to undo or rewrite history. But rather: "I just wish they knew him like we know him."

What if we could channel this instinct toward reform? What if those facing charges, their families and communities, actively engaged to impact the outcome of cases -- partnering with their overloaded public defender, letting judges know they are being held to account by the electorate, challenging prosecutorial practices, and more? Larger systemic changes are possible when people participate in the court process everyday in every courtroom in America.

The movement for police accountability has organically arrived at the courthouse steps in Ferguson. Many protesters were arrested, and must face prosecutors and judges in the courtroom, just as they faced police in riot gear on the streets. As if by invitation, the protest community and their organizing intelligence are now in the courts.

We have seen how the power of collective action applied to the court system -- what we call "participatory defense" -- makes lasting impact in the Bay Area, Calif. Through the Albert Cobarrubias Justice Project (ACJP), for seven years now family and community intervention has lead to acquittals, charges have been dismissed and reduced, prison terms changed to rehabilitation programs, even life sentences have been taken off the table.

In one such instance, Ramon, who was initially charged with murder and was facing a life sentence for a crime he did not commit, was released and all charges were dropped. His family and community worked closely with his lawyer, identifying contradictory statements by police and witnesses, ordering a polygraph and even producing "Ten Evidence-Based Reasons that Prove Ramon's Innocence," which contributed to a strong defense.

We tallied the direct impact of communities participating in their defense at over 1,800 years of time saved from incarceration. Communities not only kept loved ones home, they also saved the state and the department of corrections millions of dollars. Since the vast majority of Americans incarcerated would have been represented by a public defender, this partnership with communities could be a national game changer.

For the highest-level of impact look to those empowered to transform their lives, their communities, and the system

In my home county, despite the promise of constitutional protections, we had no public defenders at misdemeanor arraignment court. Families and communities rallied to change that, triggering a systemic change that would impact the lives of many.

The power of individuals engaging the courts as actors, rather than the acted upon, can be measured by reductions of sentences, court fines, or even by reformed policies. However, it also leads to a more profound transformation in individuals. Someone who once felt overwhelmed by a court system that represents power, law, and unlimited resources, can suddenly see that she too has power to make change, in her life and beyond. Citizens become the David facing the Goliath of the courts, and the feeling is contagious. Indeed in our weekly participatory defense meetings at ACJP, many family members who had success in their case come back to let new families know what is possible. And the positive cycle grows.

Here in Maplewood, children waited in the car for their mothers, friends came to lend moral support, and church members waited by their phones to hear the results. These are the individuals who can transform our courts. To see the movement with the size and moral authority to bring real justice to the judicial system, just walk by any court in America, and look at who is in line.

Raj Jayadev is the founder of the Albert Cobarrubias Justice Project and a recent new Ashoka Fellow. Raj imagines a new kind of reform for the court justice system driven by community-led changemaking through "participatory defense". He will join other panelists in Tuesday's SXSW session "Designing for highest-level impact: How three Ashoka Fellows evolved their models to achieve a much greater impact and more lasting societal change".