Chaotic protests in Ferguson, Missouri, may be keeping local children out of school this week, but educators are still trying to turn the situation into a teachable moment.

The racially charged protests entered their 11th day on Wednesday, following the fatal shooting of unarmed black teen Michael Brown by police officer Darren Wilson on Aug. 9. Since then, there have been dozens of arrests and numerous confrontations between protesters and police.

As a result, the first day of school has been delayed more than a week for the Ferguson-Florissant School District, until next Monday. Other districts that surround Ferguson, like Jennings School District and Riverview Gardens, also closed schools for Monday and Tuesday of this week.

But local teachers aren’t taking this an opportunity to extend their summer vacation. Instead, they’re taking steps to uplift their students and community -- albeit outside the traditional confines of their classrooms. Here are some of the things they're doing:

On Tuesday, hundreds of educators took to the Ferguson streets to clean up debris left over from days of protest, according to the St. Louis Post-Dipsatch.

"We're building up the community," Tiffany Anderson, the Jennings School District superintendent, told NPR. "Kids are facing challenges. This is unusual, but violence, when you have over 90 percent free and reduced lunch, is not unusual. … Last week, I met with several high school students, some of whom who are out here helping clean up. And we talked a little bit about how you express and have a voice in positive ways."

Jennings School District employees cleaning up in #Ferguson. Mike Shaw: "We wanted to do something positive here." pic.twitter.com/QSbDZY0SmE

School is out for many Ferguson students, but teachers are still holding classes at local public libraries. On Tuesday, teachers stood outside of Ferguson Public Library holding signs that said “here to teach” and “students welcome.” Inside the library, teachers helped students with reading, science, art and math.

"We're trying to provide a positive and productive place for students," said Ferguson-Florissant art teacher Carrie Pace to local outlet the Riverfront Times. "A place for them to come and do something educational and meet up with other students."

One 16-year-old student, Derrick Washington, came to the library to help tutor students younger than him, like his brother. He spoke with Huffington Post reporter Ryan J. Reilly about the experience.

“While they’re not in school, I can help them get ready for school,” said Washington, who is a high school student in the Ferguson-Florissant district. “Keep them in line … keep them from getting in trouble.”

Pace told the Riverfront Times that teachers would also be at the library on Wednesday, but were looking for volunteers for Thursday and Friday, including parents or retired teachers, as Ferguson-Florissant staff must attend professional development sessions during those days.

Volunteer Kathy Bisch, a teacher on sabbatical, told HuffPost she saw on the news that teachers were looking for volunteers.

"The kids are eager to be here and eager to learn," she said. "I pulled out math activities first thing this morning, and we had to pull them away from them at 10 o'clock so we could switch gears. So they're ready to get into action."

Pictures below show the dedicated educators:

Carrie Pace, art teacher at elementary school, on the street on the other side of #Ferguson pic.twitter.com/LhL3kdHFJh

Teacher providing activities for #Ferguson kids whose school is closed. "Need to do something positive" pic.twitter.com/dAd0f7afnt

Retired teacher in #Ferguson helping to lure kids to library, where learning activities are set up. No schl today. pic.twitter.com/eD8OrjyQXU

Time re-open the schools. Kudos to teachers holding class at library in #Ferguson. Education is the tool. pic.twitter.com/W68pHoAypo 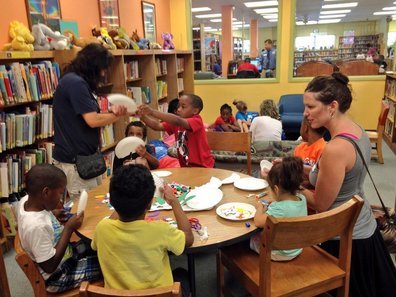 Because many low-income Ferguson children rely on meals provided by schools for sustenance, days without school can leave some students hungry. As a result, some closed schools are providing lunches to students in need, or opening up their cafeterias, according to the St. Louis Post-Dispatch.

“School is still thinking about you,” parent Chavonne Robinson told the outlet. Robinson brought her three sons to a school that had an open cafeteria for lunch. “It’s thinking about us, the whole family.”

An educator across the country has also chipped in to feed hungry Ferguson children. Educator Julianna Mendelsohn from North Carolina launched a Feed the Students of Ferguson campaign Aug. 14 to raise money for the St. Louis Foodbank. As of Wednesday morning, the campaign had raised more than $130,000.

"When I found out school had been canceled for several days as a result of the civil unrest, I immediately became worried for the students in households with food instability," Mendelsohn wrote on the Fundly.com fundraising page. "Many children in the U.S. eat their only meals of the day, breakfast and lunch, at school. With school out, kids are undoubtedly going hungry."