Five years after astronomers discovered a pair of mysterious plumes of radiation at the heart of our galaxy, scientists may be one step closer to understanding exactly what these ginormous "bubbles" are made of and how they came to be.

The so-called "Fermi Bubbles" extend about 25,000 lights-years above and below the Milky Way's galactic plane and were first spotted in 2010 by NASA's gamma ray-detecting Fermi telescope. Scientists believe the bubbles are evidence of an ancient cataclysm at the Milky Way's center.

Now, a new study suggests the violent event occurred some 2.5 million to 4 million years ago, and that it blasted gas outward at speeds of up to two million miles an hour. 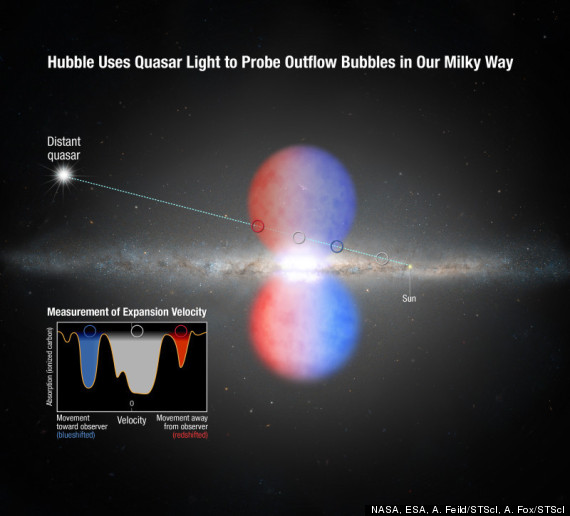 This graphic shows how NASA's Hubble Space Telescope probed light from a distant quasar to analyze the Fermi Bubbles.

For the research, scientists at the Space Telescope Science Institute in Baltimore used instrumentation on the Hubble Space Telescope to study ultraviolet light from a faraway quasar as it passed through one of the bubbles--the astronomers liken this light to "a needle piercing a balloon." The light carries information about the speed, composition, temperature, and mass of the gas that makes up the bubbles.

What did the scientists discover? In addition to gauging the speed of the expelled gas, they found it was made up of silicon, carbon, and aluminum--all of which are heavy elements produced inside stars.

The researchers hope the new Hubble data will help them determine what caused the massive outburst, NASA says.

One theory is that a group of stars fell into Sagittarius A*, the supermassive black hole at the heart of the Milky Way, which then "belched" out the gas. Another theory is that a spurt of star formation occurred near the Milky Way's galactic center, which produced gas-ejecting supernovas.

"At the moment we cannot distinguish between these theories," Dr. Andrew Fox, an astronomer at the institute and the leader of the scientists who did the research, told The Huffington Post in an email, "but that may change as we analyze more sightlines in our Hubble Space Telescope survey because then we can calculate the energetics of the outflow, and compare that with the theoretical predictions from the two models."

As a next step, Fox and his team plan to examine the full spectrum of light from the quasar and study light from other quasars.

"It looks like the outflows are a hiccup," Fox said in a written statement. "There may have been repeated ejections of material that have blown up, and we're catching the latest one. By studying the light from the other quasars in our program, we may be able to detect the ancient remnants of previous outflows."

The new research has been accepted for publication in The Astrophysical Journal Letters and was presented on Jan. 5 at the American Astronomical Society meeting in Seattle.