A preliminary hearing on Friday afternoon revealed that the three men accused of entering a Denver bar and killing five people before lighting it on fire, made off with just $170.

Lynell J. Hill, 24, Joseph Nathanael Hill, 27, and Dexter Lewis, 22, allegedly came up with the plan to rob Fero's Bar and Grill because one of them needed money to cover the costs of a previous court case.

Det. Mark Crider said that a fourth man, Demarea Harris, was present at the time of the robbery and the subsequent murders, but was working undercover as an informant for the U.S. Bureau of Alcohol, Tobacco, Firearms and Explosives on an unrelated investigation. While Harris has not been charged in the Fero's incident, defense attorneys raised the question of his credibility during the hearing.

Originally however, police had no suspects until Harris reported the incident to authorities.

Harris testified that he did not know that the trio were planning to go into the bar to commit murder and rob the place, but that he was suspicious when he found an Ironman and Incredible Hulk mask along with duct tape on the floor of the car they drove to Fero's. He says he left shortly after seeing Lewis stabbing people repeatedly.

Harris later got a ride home from Lewis and the Hill brothers who picked him up at a nearby King Soopers.

He told police he was shocked.

"These were innocent people," Harris said, according to Crider. "If they were gangsters killing gangsters, I wouldn't be here talking to you, but these were good people.”

The victims included one of the bar's owners, Young Fero, 63, of Aurora; Tereasa Beesley, 45, of Denver; Kellene Fallon, 44, of Denver; Daria Pohl, 21, of Denver; and Ross Richter, 29, of Overland Park, Kan. The five victims had all been stabbed to death before the bar was doused in gasoline to destroy evidence. 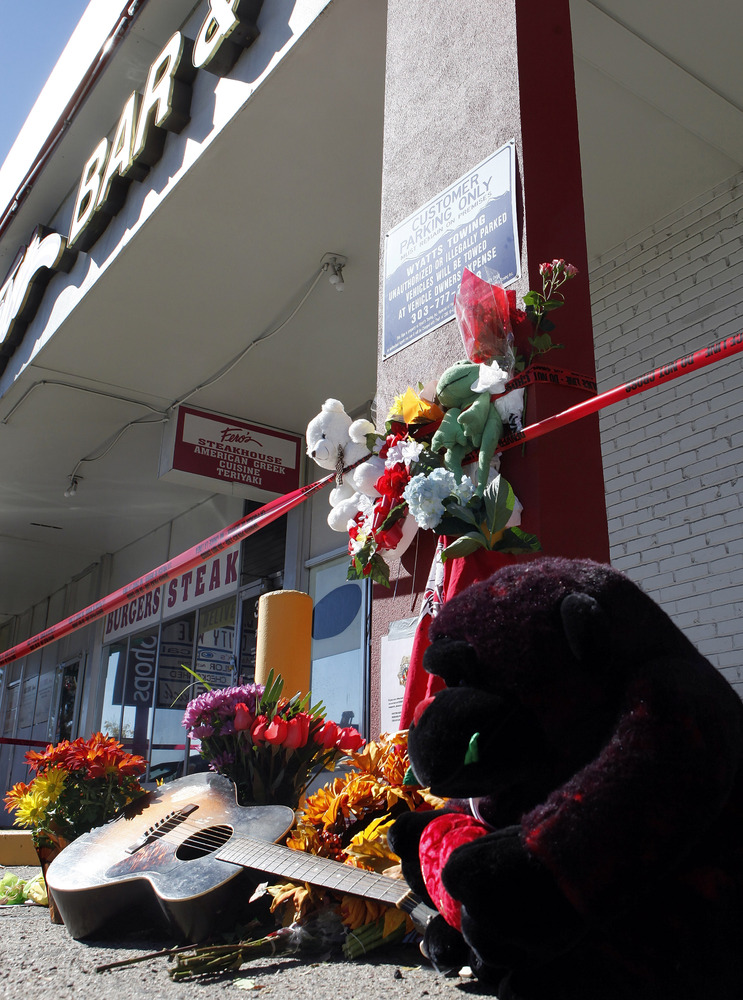 1 / 12
Flowers and stuffed animals are left at an informal memorial at Fero's Bar and Grill in Denver on Thursday, Oct. 18, 2012. The bodies of a man and four woman were discovered after firefighters extinguished a fire at the bar early Wednesday morning. Police have arrested three suspects in the case.(AP Photo/Ed Andrieski)
AP