Besides Ferrari rides and a ton of high-end golf attire, Bob McDonnell scored a custom monogrammed Rolex that spelled out his job title at the time, "71st Governor of Virginia," which was either a futile reminder or a grim joke.

In fact, McDonnell and his wife accepted over $175,000 in luxury gifts during his governorship--in exchange for peddling non-FDA-approved diet pills developed by their generous Kriss Kringle's Inc.

Two years ago, the couple was sentenced to jail on amply documented charges of their quid-pro-quo corruption. Then, this week, the Supreme Court overturned McDonnell's conviction.

Why would the high court let a person off the hook for accepting hundreds of thousands of dollars-worth of bribes in exchange for favors? According to Justice Breyer: "For better or for worse, it puts at risk behavior that is common."

EXCUSE ME? Basically, the high court is saying that unless we're ready to lock up 90 percent of our elected officials, we can't lock up McDonnell. THIS IS CRAZY. Given that the approval rating for Congress is hovering around 13 percent, Americans are ready to dump every corrupt elected official convicted by a jury of their peers.

And the Supreme Court, the highest court in the land, says its OK? That's why people don't vote. That's why so many people have checked out of politics. That's why this is no longer a democracy. And that's why so many of us have joined the political revolution that Bernie has rallied us to. 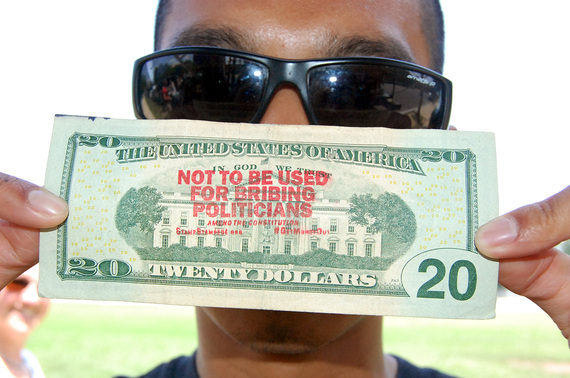 Money is running the show in politics and Americans are getting angrier and angrier by "legalized bribery," as Senator John McCain puts it. But in the last few years, the fight to overturn decisions like this one and the infamous Citizens United case, which has put big money--and who has it--at the center stage of all our elections, is growing in momentum and numbers. Americans are banding together and pushing back.

This past spring, tens of thousands of Americans flew, drove, and walked to D.C. to protest money in politics. Over 1000 of them committed civil disobedience and got arrested-- the strongest statement a citizen can make. A rapidly growing army of 65,000 people are protesting powerfully by rubber-stamping their cash with anti-corruption messages such as "Not To Be Used For Bribing Politicians" from StampStampede.org. They are converting their bills into mini-billboards demanding legislation and a constitutional amendment to Get Big Money Out of Politics. Overall, 120 national and local organizations and millions of people are involved in the movement to re-establish a political system that works for the many, not the money.

Unless we change things, if you can't afford to gift a Rolex to your representative, you have no chance at getting the representation you deserve. Your representative may even work against your interests. Just look at how McDonnell peddled questionable products to his constituents with the resources that came with his public office--and faced no consequences.

This case is a mockery of our country's democratic values, and only a mass bipartisan bottom-up movement made up of We the People can stop it--and we can't afford to stop fighting until we win.