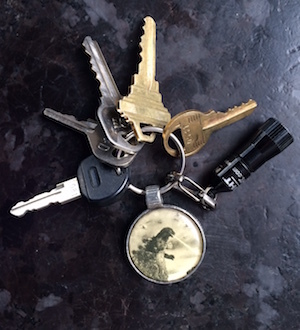 It starts small. Misplaced keys that turn up in odd places, making you wonder if gremlins have taken up residence in your home. Forgotten appointments you're sure you didn't make, until someone points them out on your calendar. Other odd happenings disregarded, still niggling in the back of your mind.

More time passes, and you begin to think someone rewrote your familiar cookie recipe in an alien language, because the words have begun to lose their meaning. They look like a jumble of disconnected letters. You walk into the laundry room to wash a load or two, but have no idea how to operate your washing machine; you then ask yourself, what are all those buttons for, anyway? You become lost walking your dog around the neighborhood you've lived in for over 40 years and spend over an hour finding your way home. A truly frightening experience! Would this be the day your anxiety turned to panic?

Envision a decline that begins without permission and chips away at all you hold dear. Would you, should you tell anyone? Or, do you simply whisper your fears to the wind, hoping that if you ignore this apparent glitch in your brain, it will disappear and you'll soon be back to your old self? Until that time, surely it wouldn't be too hard to fake it ... would it? Then, a chilling thought -- it couldn't possibly be the beginnings of dementia ... could it? And, what if you did tell someone and they locked you away in a special care facility? Is this a risk you'd be willing to take?

My mother entered this world sometime in her late 70s or early 80s. To this day, our family remains unsure exactly when her cognitive decline began, largely because of our naïveté in recognizing the decline, combined with Mom's resourcefulness in covering it up.

One of the most glaring incidents our family overlooked early on occurred the weekend of a family reunion held at Mom and Dad's house to celebrate Dad's 90th birthday. Mom and Dad's two oldest granddaughters, Katie and Deanna, arrived from the west coast as a surprise. We prearranged for them to come to the front door individually in order to draw out that surprise ...

Katie was the first to ring the doorbell. Mom answered the door, "Oh my goodness! Look who is here; it's Katie!" Katie walked into the living room to greet and hug her Grandpa.

"Well, Katie! What a surprise!" he said, returning the hug with obvious pleasure.

After a few minutes the doorbell rang again.

"Now, who could that be?" asked my mother as she hurried across the room. There in the doorway stood Deanna.

My mother, looking a bit confused, stared at her granddaughter and said, "Who are you?"

Deanna's face fell. The rest of us looked on in shocked disbelief. "Who am I? Why, I am Deanna, your granddaughter," she replied in a perplexed and somewhat shaky voice.

It was another clue that we somehow brushed off, attributing it to the stress of taking care of Dad and the commotion of having so many visitors all at once. Looking back, it is now obvious to me that our minds are well-tuned to rationalizing strange events or behavior in our attempt to normalize life.

Excerpted from Somebody Stole My Iron: A Family Memoir of Dementia

Sometimes I wonder how far along this journey Mom traveled before realizing her abilities and her sense of self had begun to gradually slip away. What must that have been like for her to silently endure, alone with her thoughts and fears for the future? I imagine it as terrifying.

Only later, following her doctor's official diagnosis of Alzheimer's (the most common form of dementia), after she'd been "outed," did she allude to the disease, and even then, only a few times. In one conversation, she forbade family members from speaking the dreaded word "Alzheimer's" in her presence. Once in awhile, she'd anxiously comment to me, "I'm losing my mind!" She knew, without a doubt, of what she spoke. One excruciating memory at a time, she was losing her mind.

June is Alzheimer's and Brain Awareness Month, providing an opportunity to bring Alzheimer's disease into the limelight. It's gratifying to see more people coming forward to talk about this disease, but there's work yet to be done. Let's come together to fully remove the stigma associated with memory loss, by continuing the dialog. After all, millions of people are already afflicted and this number is only predicted to increase as we boomers age. Learning to recognize the warning signs and removing the stigma will improve chances of an early diagnosis.

How about you? Would you 'fess up or cover up?

After teaching somewhere around 10,000 mother/baby pairs the art of breastfeeding, Vicki Tapia found her energies redirected to the other end of life, after both parents were diagnosed with dementia. A diary written to help her cope with caregiving morphed into Somebody Stole My Iron: A Family Memoir of Dementia, published in 2014 by Praeclarus Press. Tapia's memoir was a finalist in The 2015 High Plains Book Awards.

'Fess Up Or Cover Up?
Foods For Brain Health