Hanukkah, the Festival of Lights, which begins in the evening on Dec. 1, is all about exposing what is hidden, uncovering mysteries and embracing unbelievable miracles. Matisyahu, the hometown Hasidic hero of New York City and a cultural icon for Jewish America, crafted his own light-filled musical mystery at the Brooklyn Bowl on Nov. 29, opening his nine-night Festival of Light tour with a nearly non-stop, two-hour set that covered the span of his career while peeking into the unknown future.

This show was the first spark, the shamash of Matisyahu's touring menorah. Let me explain: There are eight days of Hanukkah, which celebrates the miracle of one day's worth of oil lasting for eight days as the successful revolutionaries of the Maccabee family rededicated the once-desecrated Holy Temple. Modern Jews celebrate the holiday by lighting a nine-branched candelabra, called a menorah, the number of flames increasing with the number of days.

So why does the menorah have nine branches instead of eight? There's a special commandment that one may not use the lights of the menorah for any practical purpose other than proclaiming the miracle of the holiday. An additional flame, the shamash, is needed to symbolically help the other flames be revealed in the world. Hence, eight days, nine flames. So too, if each show in Matisyahu's Festival of Light is it's own unique flame, then the shamash, this opening show, was a helping of pure holiday fire.

Other parallels abound. Born Mathew Miller, Matisyahu took on his Hebrew name after becoming religious in 2001, and it is that moniker that has become a household code name for observant Judaism in the face of cultural and spiritual Jewish assimilation. In that context, there's nothing new about a Matisyahu today because there lived, more than 2,000 years ago, another Matisyahu, also a symbol for strengthening Jewish roots in a spiritual desert. He, of course, was the father of the Maccabean revolt that reclaimed the Second Temple in Jerusalem from unholy Hellenist hands and therefore created a new Jewish festival.

"A name is a deep thing, you know," 21st-century Matisyahu said before the Brooklyn Bowl show. Hanukkah, while it might not be the most holy holiday, is the most widespread.

"Any Jew who's never even been to shul on Yom Kippur has probably lit a menorah, right? ... In that same way that, you know, my music has penetrated into some pretty far out places where a lot of people might not know anything about Judaism."

The venue on Nov. 29 was the opposite of far out. It was like a home-cooked meal: The disco dreidel hanging above an audience -- in which visible Torah observance was the rule, not the exception -- that chanted things like "baneh beis hamikdash, bimheira b'yameinu" ("Rebuild the temple speedily in our days") along with an unabashedly side-locked reggae artist felt the perfect way to bring in the holiday.

Wanting to spread this hamish feeling to farther corners of the Earth, Matisyahu will take his Festival of Light, which is in its sixth year, out of the confines of New York for the first time.

"Whereas normally I'm not considering who's coming to the shows, on Hanukkah I'm thinking, 'OK. So I should go to Baltimore, there's, like, a bunch of Jews there,'" he said. The tour also makes stops in Boston, Philadelphia and Portland, Maine.

Another parallel: Hanukkah is the holiday of light amid darkness; Matisyahu's is the music of light within darkness. His first album, Shake Off The Dust ... Arise, whose copious amounts of roots dub devotion first brought about the Rasta reputation, is replete with references to spiritual fire. The collection is anchored in part by a song called "Aish Tamid," which literally means "Eternal Flame."

"Uncovering debris lifting up the fallen arisen within / to reach the Yiddin even in Manhattan / exposed menorah glowing in the shadows of destruction / trailblazing through affliction / brushing off the branches golden / standing strong flames / dancing like a lion roaring rising out of nothing."

An extended exploration of this song anchored the show in Brooklyn, it's lyrics a maze of rhymes whose entrance is the streets of New York City and whose exit is backwards in time to the scene of the ancient Temple's revitalization. Backed by the Dub Trio of drummer Joe Tomino, bassist Stu Brooks and guitarist D.P. Holmes, who provided a rippling blanket of organic electronic music, Matisyahu brought this eternal flame into the cosmos. "Space Tamid" it should forever be called.

There was no preaching on this night -- no stories or interludes or appeals to the unconvinced.

"Don't describe it. Don't explain it. Just do it. Do it with your music," Matisyahu said about his approach to music at the end of 2010.

The rest of the set was itself a maze of Matisyahus -- the otherworldly beat boxer, the ecstatic rapper, the mystical mensch -- a version of the man peeking around every corner of this non-stop dance party. The newest and most divergent Matis takes the mic for "Miracle," a single released just for Hanukkah.

"Eight is the number of infinity / one more than what you know how to be, / and this is the light of festivity / when your broken heart yearns to be free."

PHOTO GALLERY
From Darkness Into Light: Matisyahu's Festival of Light Opens In Brooklyn
Download
Calling all HuffPost superfans!
Sign up for membership to become a founding member and help shape HuffPost's next chapter
Join HuffPost 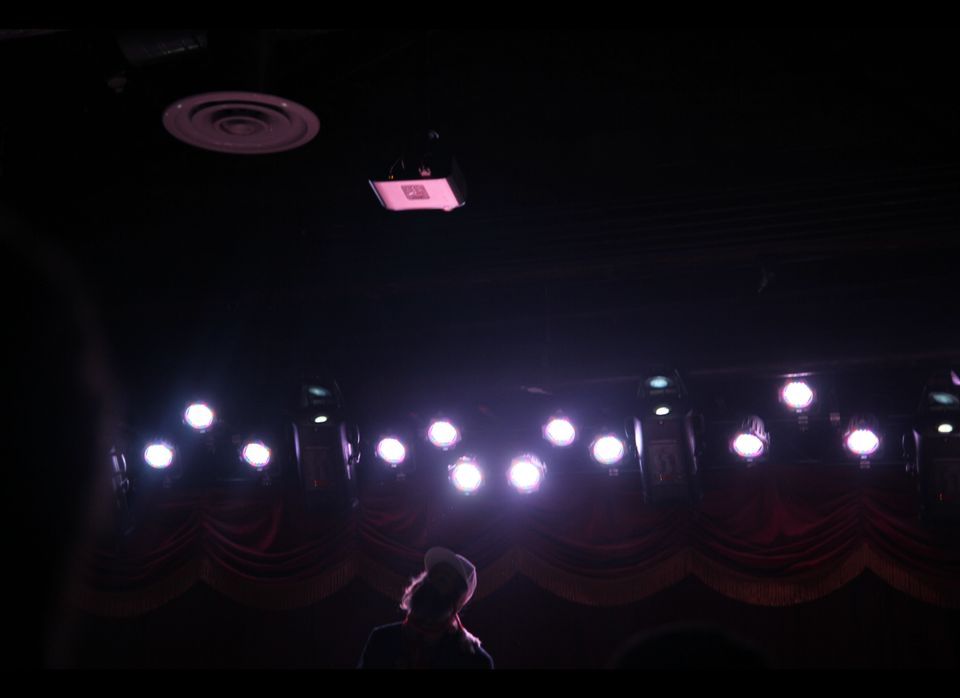 1 / 22
Matisyahu on stage at the Brooklyn Bowl for the opening show of his Festival of Light Hanukkah tour.
Josh Fleet