"Festivals of the World" is an educational series by Mike Ghouse that has been active since 1993. When we live in the same communities as neighbors, we might as well learn about each other. The best way to build cohesive societies is for its members, is to participate in festivities as well as commemorations of each other, or, at least understand each other's' joys and sorrows. Please note the simplicity in writing is designed for people of other faiths to learn and to know, so we can function cohesively.

Should Christmas be an exclusive Christian event?

This Muslims' answer is no. We cannot limit Jesus to be exclusively owned by any group of people, nor can anyone monopolize his message. Jesus and his message belong to the whole of humanity.

For Christians, he is the son of God, and for all others, he is a great man who brought the message of hope and peace to the world. Muslims have their own understanding of Jesus, but no Muslims' faith is complete without believing in the virgin birth, his miracles and following his message of inclusiveness.

Whether we believe in God or not, we can certainly appreciate the efforts of these great men, and the women who taught us to get along with each other. They were committed to building cohesive societies where no human had to live in fear of one another. Every great teacher, including: Zarathustra, Abraham, Krishna, Moses, Buddha, Mahavira, Confucius, Jesus, Muhammad, Nanak, Baha'ullah, Joseph Smith and several Native teachers from across the world, wanted goodness for the group they were surrounded with, and each one had a great message. God willing, I will be sharing my message to everyone here at Huffington Post in 2014.

Why should you celebrate Christmas?

Christmas is about celebrating the message of Jesus, which each one of us can appreciate in our own way. The spirit of Christmas is encapsulated in the acts of kindness to fellow beings.

First of all, it has become a season of peace, where every human becomes super conscious of his or her responsibility towards fellow human beings, and is encouraged to bring joy to their lives. If you don't stand up for others, why should anyone stand up for you?

Secondly, we cannot remain invincible forever; there comes a time in every one's life when he or she becomes vulnerable and needs help. When we were born, we simply did not walk out of our mother's womb and say: "Hi, world. I am here, and have made it on my own, and I am ready to roll!" Similarly, we cannot bury or cremate ourselves, we need others' help to enter, as we depart from, and live in, the world.

Thirdly, the entire Christian world gears up to bring the joy in the lives of children who may not have a toy or parents to give them that joy. This is one big event of the world where you see hopes on the faces of children. It's not too late; you can still deliver a toy through your local church or store, and see the difference you can make on the face of that unknown child.

Each one of us is going to face a new world a generation from now. Indeed, our kids and grandkids will grow up in an environment where there are people of different races, faiths, cultures, ethnicities and sexual orientations, and they will interact in every office, public place, factory, theater and sport. They will intermarry and develop friendships as well.

With that, we are bound to have conflicts, and it behooves for us to learn about each other, so we can live with the least conflicts and turmoil. That was also the message of all the teachers, but now, we get to focus on the message of Christmas.

Jesus's message was simple -- love your neighbor as you love yourselves. Forgiving the wrong doer frees you up from the bondage of ill-will, indeed, and you will be the beneficiary of these acts.

Jesus showed us the way to overcome our biases and prejudices by loving our neighbors, and he showed us the way by embracing the outcasts of the time. Indeed, Pope Francis is one of the few men on this earth today, who is walking the walk, and he is my religious hero; the newest Pluralist in my life.

About white Jesus and white Santa:

Even though God is stamped onto our memory with certain images, features and characteristics, some of us have developed our own embellishments to personalize him, her or it.

While a majority of Christians, Hindus and others have a built-in image of God, the Buddhist, Jains, Zoroastrians and Native traditions do not have a set image, yet they have created their own image of God. The Jews, Muslims, Sikhs, Baha'i and others do not take God as a being, and resist collapsing God into an image or a shape. But deep down, they imagine and describe God as a being, even though they knock it out instantaneously. It's human to relate with God as one's own.

If someone likes you, they want to see you in their own image. Some of the white Christians will resist the idea of Jesus to be anything but what they have come to know and believe, as if Jesus will cease to exist if he were black. The black Christians may not relate with the image of white Jesus and Santa.

The need of the day is to upgrade Jesus, above all human imaginations and limitations, and accept him in essence, rather than in a set form. It is his love and sacrifice to humanity that needs to be appreciated. I hope and pray that, at least from this Christmas season forward, we accept and embrace Jesus, without reserve, just as he set the example of embracing the humanity without reserve. Let him be meaningful to us in every which way he can be imagined.

We must celebrate this spirit of Christmas. 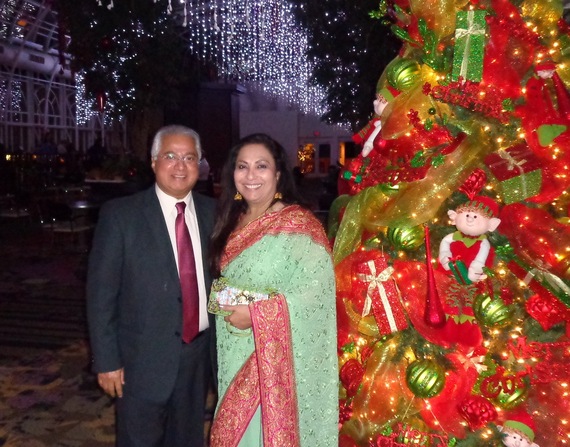