Gulen's name has progressively reached a wider Western audience. From the New York Times to 60 Minutes, the average American has had slight and subtle exposure. But over the last two months, Gulen's name has been featured prominently in the global press (such as the BBC who scored a very rare video interview). Now there are thousands of references to his name in the world media. Attention is being paid. 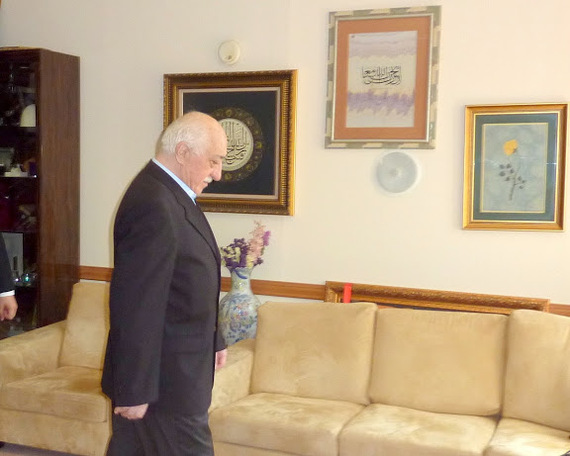 But, let us note that most of news coverage paints Gulen within a political narrative -- forgetting (or ignoring) four decades of civil society advocacy, education and dialogue activities and support for democracy and human rights. There is more to Gulen than this current political paradigm. Some history and perspective will help set the facts straight.

Gulen was raised in a very pious family in Eastern Turkey in traditional Sunni Islam while also being immersed in various sufi teachings. He was trained in the spiritual and religious sciences, both at home and under the tutelage of the region's religious and spiritual masters. He was very influenced by the sufi works of Rumi and Yunus Emre.

He was also introduced to Said Nursi's Risale-i Nur ("Treatise of Light") a collection of some 6000 pages on issues of faith and science and their interdependence. In one section Nursi's speaks of the three social ills in the Muslim world being ignorance, poverty and disunity, and the responsibility of all Muslims to overcome these. Gulen takes this social awareness one very important step further -- these three social issues are not Muslim specific, but affect all humanity, and that it is incumbent on all Muslims to help alleviate them no matter one's race, creed or color. These are the intellectual seeds for Gulen's "Service" Movement (Hizmet in Turkish).

During the late 1960s and 1970s, Gulen preached these ideals from the mosque pulpit to local coffee houses in Izmir, Turkey's third largest city, and garnered a following -- particularly among the local business people and, later, university students. His eloquence and oratory skills, his passion and tears-filled discourses, his love of country, love of God and Prophet Muhammed, love for humanity, his encouragement of service, and his desire to break the rigid mold of building mosque and madrassa initially led to a small fan base of supporters who volunteered and raised funds to support the first small dormitory and education center in the seventies. During his travels as a guest preacher, he became more well-known and popular throughout Anatolia. Similar projects begin outside of Izmir. During this time in 1979, supporters began publishing Sizinti (meaning a spring or fountain), a magazine dedicated to spiritual values and science. Throughtout the '80s, institutions start to increase in size and number. The first private college opens in Istanbul in 1986 -- the private Fatih High School.

During this time Zaman newspaper is purchased with an daily circulation of approximately 5000. Today, it is Turkey's most read newspaper with more than 1.2 million daily circulation. In 2007, an English daily, Today's Zaman started publication. With time various institutions were founded and multiplied, amongst them FEM prep schools, Fatih University, Kaynak Publishing Group, Samanyolu Television Group,

Kimse Yokmu a relief and humanitarian aide organization now services more than 100 countries through various social service and community building projects and relief work. Dialogue and bringing together polarized communities was an essential element in Gulen's message and the first organization to bring together disparate sectors of society was the Journalists and Writers Foundation which brought together Turks and Kurds, the political left and right, Alevis and Sunnis, secular liberals and religious conservatives and Muslims and Non-Muslims. Tuskon, a national federation of various regional and provincial business networks, now has the largest membership in Turkey of any business organization with numerous international offices encouraging trade and cooperation.

All these institutions added to the Hizmet's mix of civil society initiatives -- all with those initial three social issues in mind. Numerous and various institutions supporting these shared values appeared throughout Turkey over these past four decades. In the early 1990s with the break up of the Soviet Union, Gulen encouraged business people to take up the challenges of Central Asia. Within a short time with the assistance of philanthropic business people investing in the region schools began to open. Similarly through business people's and university students' engagement with local diaspora groups, Gulen's ideas spread initially through Europe, Australia and North America and later Africa, Asia and South America.

The role model and positive activism of Hizmet participants were crucial in this process. As too was the example of institutions already flourishing and successful in Turkey. Gulen's articles, books, audio and video cassettes also played an important intellectual role.