A Muslim religious leader, Fehullah Gulen, is daily in the news, as Turkish president Erdogan accuses him of plotting the recent coup, calling him a terrorist. We are so used to Muslim clerics being or being considered terrorists that we give the matter little thought. And yet, the recent crackdown in Turkey on Gulen's movement, Hizmet, should be of grave concern to anyone who cares about the Middle East, about Islam, and about religion.

On Islam and Politics
Muslim leadership is based on the example of the Prophet Muhammad. The Prophet held together two kinds of leadership -- religious and secular (including military). Later generations in the Islamic tradition were unable to hold the two components together, and the split between them has led to a complicated history of Church-State relations, a history that continues to unfold in our own day. Negotiating politics and the state remains a major concern today. Consider: the biggest global threat is an organization called the Islamic State, pointing to the core of the challenge. The world, or the "West", or whatever we chose to call that significant "other", is constantly pitted against Islam, and more often than not against its violent face, an Islam that has a hard time reconciling contemporary notions of the state, of democracy and the rule of law with Islamic tradition. How many times have I heard the rhetorical question -- where are the "good" Muslims? Where are the "moderate" Muslims? The millions who follow Fethullah Gulen have an answer, and it is Mr. Gulen. His views respecting democracy, the rule of law, and opposing terror and violence have been consistent for decades. It may have taken the present crisis to bring this man's views to broader public attention. 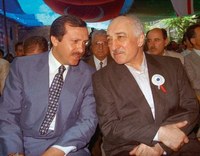 The Gulen Movement - A Personal Connection
I have been friendly with members of the Gulen movement for nearly 20 years. I have found in them trusted partners, potential partners and friends, who share a common vision of humanity, religion and values and who, like me, work through interreligious dialogue to achieve this vision. Sometimes it requires a living relationship to give reality to ideals. Friendships with members of the movement that I have enjoyed for nearly 20 years have led me to high esteem for their brand of Islam, to the depth of their humanity and ultimately to their spiritual teacher, whom I have never met in person. One of these friends is Alp Aslandogan. Alp is Executive Director of Gulen's Alliance for Shared Values, an umbrella organization of several Gulen-related, US based organizations that engage in interfaith dialogue. His office handles media enquiries for Mr. Gulen. I've known Alp for some time and have been touched by his person, his views on Islam and on interfaith dialogue.

I had a long talk yesterday with Alp. Religion and politics were an important part of our conversation. As Alp stated, when religion and politics get mixed up both suffer, but religion suffers more. And yes, there is regret by the Gulenists for uncritical support of Erdogan in the early years. Things could have been easier, he admitted, had Gulen simply gone along with Erdogan. But for Gulen independence is a principle. His movement should never become a satellite to a political party. Becoming a political party was simply out of the question. Gulen has a clear view of Church-State relations. The religious voice should be part of a system of checks and balances in relation to the State. When all goes well, the two support each other. But the political order has more than once destroyed the voice of religion. All four leaders of Muslim legal schools, Imams hanbal, hannafi, shafi and maliki suffered under political authorities because they refused to pledge unconditional authority. Gulen, then, was following a painful but tested pattern of Muslim political-religious history.

Weathering the Hard Times
Gulen draws on Muslim spiritual teachings and is considered by his followers in line with the Sufi tradition. This conditions his response to the present moment. I asked Alp how he viewed the future of Hizmet in Turkey. He acknowledged that it has now been destroyed in Turkey. "It will continue living in the hearts". Other observers have suggested to me that this may be the moment that the movement may grow globally, rather than in its homeland in Turkey. Time will tell.

What are Gulen's teachings for the moment, I asked? What teaching can he offer his persecuted flock? Alp calls it "active patience". On the practical side, one must do all one can to defend one's rights. But in terms of attitude it is a call to patience, despite whatever they do to you. The patience involves patient suffering. One must observe the law, and not cause further polarization, or engage in violence. But this patience also has an active part. It involves reflection, looking to the lessons we can draw from the situation, lessons that are true for society as such. Every event has a purpose, and so its purpose must be sought out. But this can only be fulfilled along with trust in God. Only so can one avoid the descent into violence.

I listened in amazement. This spiritual teaching echoes generations of martyrs who relied on God as their support, resisting the temptation of power, if such existed. Here it is, a teaching of an embattled and persecuted Muslim group, in a world in which the nature of true Islam is one of the most burning global challenges.

I've been struggling with the appropriate response to these events. There has been an outcry concerning violation of human rights in Turkey and concern over torture and rape. There's been concern about using the coup for political purposes. We can easily recognize, as Alp argues, that there is no vacuum and that the space from which Gulen is ousted may well be taken up by forces we would not wish to see in his place.

Chief Rabbi Bakshi Doron and Pope John Paul II; Waiting for their voice to be heard

But in all this little has been said about what this says about Islam and more particularly about one of the protagonists, Fethullah Gulen. Much of that is due to his reclusive nature. He is an unmarried recluse, a teacher, a man who has inspired millions, but who avoids the public square. Yet, he has made friends in his day. He visited synagogues long before interfaith was in vogue. He reached out and met with Pope John Paul II and with Chief Rabbi Bakshi Doron. He advocated friendship between religions. Where are his friends and their followers in time of need? It is time their voice was heard.

Founder and Director of the Elijah Interfaith Institute. Acknowledged as one of the world’s leading figures in interreligious dialogue.