They've just released the video above of the their time graffing in Miami during Art Basel, as first posted on The Heat Lightning.

Few and Far was started to strengthen female graffiti artists through community, and the collective was particularly inspired by a recent phenomena in which honeybees were disappearing due to something called colony collapse disorder.

The ladies centered their Wynwood mural around the concept of bees, deeming it the Queen Bee wall.

"We wanted our next production to have some type of meaning behind it, since bees are extremely diligent but at the same time very small and easily effected by environment changes, etc," Few and Far founder and organizer Meme told HuffPost Miami. "The honey bees are dying at rapid rate enough to affect all the world’s food. We work as a solid team as the bees do just the same, but in our hive, we are all Queens."

Some of the 14 artists who contributed include Miami artists Tatiana Suarez and Reds as well as others from around the country including TooFly, Lady Mags, Agana, 179, Glow, Hops, Ksra, Myla Dime, Amanda Lynn, and Erin Yoshi.

When asked what it was like for a female graffiti artist these days, Meme told HuffPost Miami she tries not to focus on it.

"I try not think about this much these days, I just want to be who I am without worrying about gender all the time. It will just wear you down. I find it difficult sometimes being treated fairly and respectfully, when I have been for years very devoted to painting. No easy credit is what we like to say."

Click below for images from their time in Miami and their Queen Bee wall sketches. 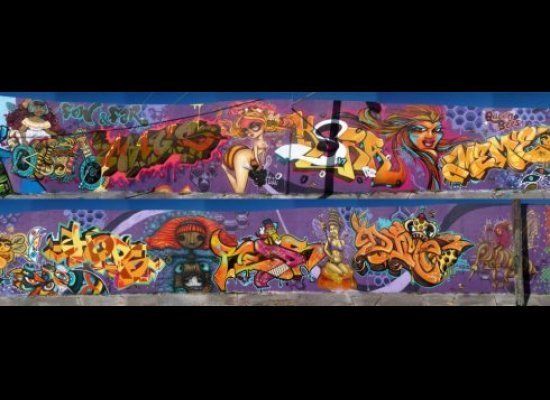