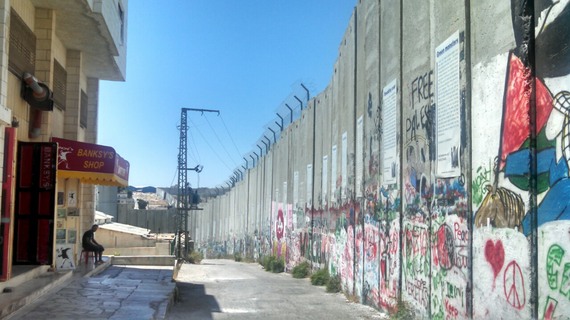 First it was Clint Eastwood and American Sniper. For the sake of educating myself on all things mainstream, I endured two hours of this peculiar Western devotion to fiction, violence and American exceptionalism. As suspected, Eastwood stayed true only to Hollywood's profit formula: Omit war crimes, illegal invasions, missing WMD, some 100,000 dead Iraqi civilians and any truth that could dilute the endorphin rush of blind patriotism -- and, therefore, the almighty moviegoer dollar.

I left the theater nauseous. Eastwood's candy coating was too much. As film credits and real-life photos of Navy SEAL sniper Chris Kyle crawled heavenward, moviegoers sat motionless or shuffled out in reverent silence. A woman next to me stared wide-eyed at the screen and whispered to her date:

"I didn't know this was a true story."

Two weeks later my tongue continues to heal. I bit it that hard.

Now it's Israeli Prime Minister Bibi Netanyahu and his Game of Thrones. More cherry-picked storytelling, more simulated violence, more of the same tired narrative depicting Middle Eastern Arabs as Islamic savages intent on eradicating the "Good Guys". In this case, Israeli Jews. To hear Bibi tell it, if not for the benevolence (read: fat wallets) of Washington and its Christian-majority electorate, Israel -- cast as the best friend Americans have in the Middle East -- would be wiped clean off the planet and the West would be further exposed to militant Islam.

At the U.S. Capitol on Tuesday, with easy command over a glad-handling GOP, Bibi used the tactics of Hollywood and Washington to omit from his speech an uncomfortable all-important truth: If Israel is the best friend Americans have in the Middle East it's only because Israel creates so many enemies for the United States.

Israel flaunts international law (e.g., collective punishment of the masses, illegal occupation of lands obtained in war; discriminatory laws based on national origin; to name just a few of the violations cited by the United Nations) by relying on Washington to provide cover on the U.N. Security Council and money militarily. The fact that Israel rides roughshod over East Jerusalem, the West Bank, most Palestinians, and a laundry list of international laws is the largest obstacle to peace in the Middle East. It's also the primary reason my dark blue passport can feel like a liability when I travel there.

This U.S. complicity with Israel's crimes greatly erodes Washington's influence for change in the region and helps drive the very thing Bibi crowed about on Capitol Hill:

Iran and ISIS are competing for the crown of militant Islam. ... Both want to impose a militant Islamic empire, first on the region and then on the entire world.

He then evoked the dark violence of a fictitious HBO series with his sloppy blurring of fact and fiction.

"In this deadly Game of Thrones," the protagonist Bibi declared, "there's no place for America or for Israel. No peace for Christians, Jews or (for) Muslims who don't share the Islamist medieval creed; no rights for women, no freedom for anyone."

I've heard it said the best way for Washington to create peace in the Middle East is to stop providing U.N. cover for Israel and eliminate the U.S. money that fuels Israel's defiant behavior (more than $20.5 billion given just during the Obama administration). In effect, it's Parenting 101: Make Israel responsible for its actions.

Before Navy SEAL Chris Kyle was killed Feb. 2, 2013 at a shooting range in Texas he'd said that most U.S. civilians were clueless about Iraqis, a people he painted in one broad brush. Savages, he called the Iraqis. "The public is soft," Kyle told reporters. "They have no idea."

And they still don't -- at least not about the true nature of Arabs and Muslims. For that we can thank Hollywood's greedy devotion to feel-good narratives and the GOP's propping up of an Israeli "protagonist."

The Iraqis that Kyle knew from the scope on his rifle were defending a sovereign nation from an invading army. (Would Americans resist or roll over if, say, China stormed across their borders?) The Islamic nation(s) and militants that Bibi depicts as humanity's biggest threat are, in large part, creatures of U.S. foreign policy and Israeli arrogance.

The other night at an Uno's bar near Washington, D.C., the discussion turned to movies. I chimed in with Kingsman as my recommendation for the best movie I'd seen this year. Another patron voted for American Sniper and called it the greatest move ever made. Another patron and another and then the bartender all agreed.

My tongue hadn't healed. I couldn't bite it again. So, in an unpopular rebuttal, I argued against it for many of the same reasons I discuss here. I was immediately, politely dismissed.

"Okay, maybe the whole thing wasn't entirely true and accurate and all of that," a kindly woman offered, helping to ease me from the discussion. "But Kyle is still an American hero. You cannot argue that fact. He was over there protecting us!"

Toward the end of his diatribe to the GOP, Bibi offered up a simple remedy:

Presumably, that would include following international law.