HAVANA, April 4 (Reuters) - Former Cuban President Fidel Castro, 88, appeared in public "full of vitality" for the first time in more than a year on Monday, greeting a delegation of Venezuelans, official media reported on Saturday.

It was his first known appearance outside his home since Cuba in December agreed to normalize relations with the United States, Castro's longtime adversary.

Official media showed images of a seated Castro shaking hands with the visiting Venezuelans through the window of his vehicle, wearing a baseball cap and a windbreaker.

There was no explanation why five days passed before the encounter was reported in Cuba.

He met at a school with 33 Venezuelans, who were on a solidarity mission to Cuba, for about 90 minutes. Since the fall of the Soviet Union, oil-rich Venezuela has become Communist Cuba's closest ally and chief benefactor.

Castro impressed the Venezuelans with a firm, long handshake and a lucid mind, the newspaper Juventud Rebelde reported in a writer's first-person account.

Castro relayed "multiple details about life in Venezuela, especially now that this great nation has become the bull's eye for imperial greed," the report said, in apparent reference to U.S. sanctions on Venezuela that declared the South American nation a national security threat.

"Fidel is full of vitality," the report said.

Castro's last previous public sighting came on Jan. 8, 2014, at the opening of a Havana cultural center sponsored by one of his favorite Cuban artists, Alexis Leyva, alias Kcho.

In December 2014, U.S. President Barack Obama and Cuban President Raul Castro, Fidel's younger brother, announced they would re-establish diplomatic ties, opening a new era in the previously turbulent relations that arose after the Castros came to power in 1959.

Fidel Castro stepped down due to illness provisionally in 2006 and definitively in 2008, handing off to his younger brother Raul, 83. Fidel writes an occasional newspaper column, receives dignitaries at home, and rarely appears in public.

His current role in policy-making is unknown. Many Cubans presume Raul Castro consults with his brother on major decisions, and Fidel Castro's long silence after the December announcement raised questions about his health and whether he agreed with the rapprochement with the Americans. (Editing by Andrew Roche) 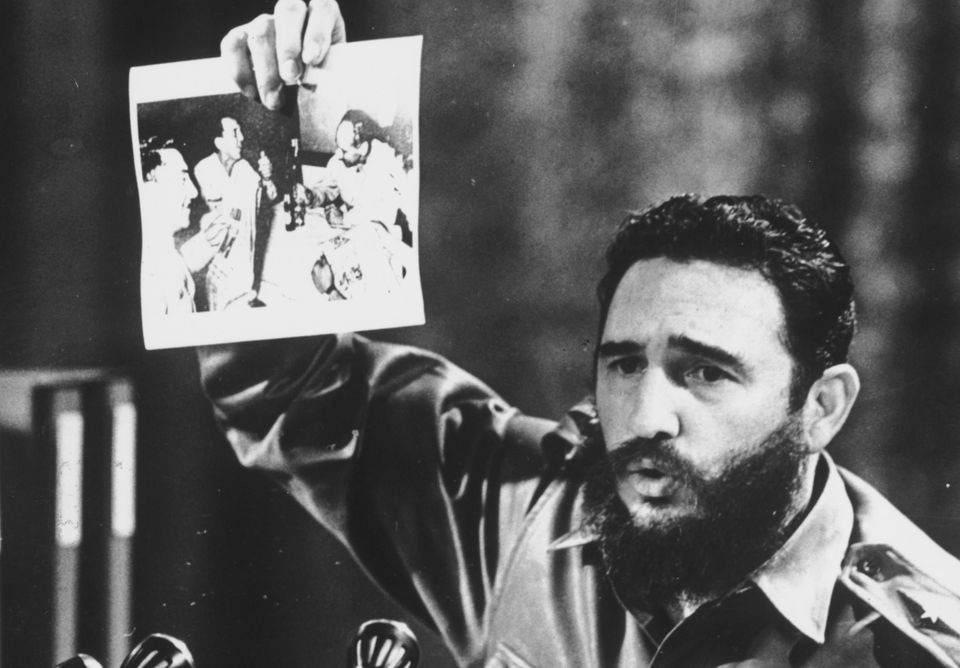 1 / 8
5th July 1968: Cuban Prime Minister Fidel Castro, presents a photograph in which General Ovando Candia and other men of the Bolivian Army get drunk to celebrate the murder of Che Guevara, the Latin American revolutionary. (Photo by Keystone/Getty Images)
Getty Images