HAVANA, Feb 12 (Reuters) - More than a week after former leader Fidel Castro was quoted in Cuban media as saying Venezuela's cancer-stricken President Hugo Chavez was "much better," the Communist Party newspaper published a different, toned down version of his comments on Tuesday.

The transcript in Granma, said to have been "reviewed and updated" by Castro, left out the more positive assessments of Chavez' condition, but did say he was recovering.

Castro, who spoke with reporters when he went to vote in Cuba's National Assembly election, was quoted in Feb. 4 news accounts as telling reporters he got daily reports on Chavez and that he was doing "much better, recovering" two months after undergoing a six-hour operation in Havana.

"It has been a tough fight but he is improving," Castro said. "We have to cure him. Chavez is very important for his country and for Latin America."

In the official version, published Tuesday, a reporter asks Castro if he had heard anything about the condition of Chavez.

"Yes, every day. He is recovering, according to the last medical report I received today, Feb. 3, at midday," Castro replied.

"Yes, although they have been difficult and hard days. Our doctors devote themselves to this task, this is what I am able to tell you since the information is a right that belongs to the (Venezuelan) government and his family members," Castro said.

There was no explanation for the changes accompanying the transcript, nor was it known why it was published nine days after the original conversation.

The transcript took up five pages of the eight-page newspaper, of which the part about Chavez was just four paragraphs, with the rest showing the 86-year-old Castro expounding on a variety of topics.

Chavez, 58, has been behind closed doors in a Havana hospital since undergoing his fourth surgery for cancer on Dec. 11. His cancer, which was diagnosed during a June 2011 visit to the Cuban capital, has been described only as being in the pelvic region.

The gregarious socialist has not been seen or heard publicly since the operation, but visiting Venezuelan officials have said he is getting better and in control of the government.

Chavez is Cuba's top ally and benefactor and has said Fidel Castro is his mentor. He provides Cuba with most of its oil.

The former paratrooper was elected in October to another term as president, but has not yet officially taken office.

Fidel Castro took power in a 1959 revolution and led Cuba for 49 years before his own health problems forced him to resign the presidency five years ago. 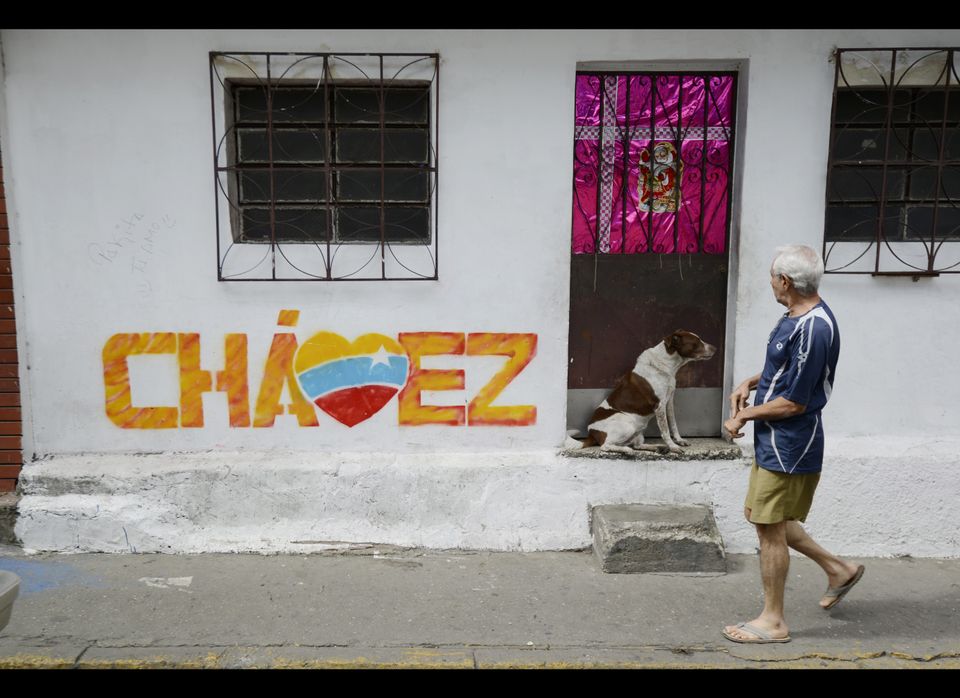 1 / 19
A man passes in front of a graffiti of Venezuelan President Hugo Chavez in Caracas, on January 2, 2013. Chavez is conscious and fully aware of how 'complex' his condition remains three weeks after difficult cancer surgery in Havana, the Venezuelan president's handpicked successor, Vice President Nicolas Maduro, said Tuesday. Maduro, who is returning to Caracas today on January 2, provided no specifics about Chavez's condition but defended the government's efforts to keep the public abreast of the president's health. Chavez underwent his fourth cancer-related surgery three weeks ago in Havana and has been bed-ridden ever since. (LEO RAMIREZ/AFP/Getty Images)
LEO RAMIREZ/AFP/Getty Images