Let's start before the beginning: No Brill Building, no me.

At the Brill, Manhattan's mid-20th Century citadel of music biz hustle, the elevator man was a bookie, music publishers reigned supreme and songwriters, song-pluggers and Runyonesque hangers-on filled the offices and spilled into the streets, swapping stories, making demos, pitching material, and helping each other with lyric lines, racing tips, legit (and sometimes not so legit) connections and career advice.

I owe my specific existence to Suite 507, where in 1948 a 21 year-old jazz lover named Eleanor (Terry) Berkowitz served as Gal Friday to a wild and wonderful singer/entertainer named Louis Prima.

Terry's duties, in addition to taking dictation, included cajoling hostile hoteliers reluctant to book Louis' tours because they thought he was black (he was a dark-skinned Italian whose music displayed a decidedly black influence), arranging bets on his stable of ponies through the bookie Jeff Bernie (brother of bandleader Ben ["Yowsa, yowsa, yowsa"] Bernie), and perfecting the art of duplicating the great man's signature on autographs to accompany the greeting, "Be Happy!"

One day in the Brill, Terry made elevator contact with a songwriter named Carl Sigman.

Carl's career had been interrupted by Adolph Hitler. Now, having been discharged from the U.S. Army with a Bronze Star for flying glider missions in Africa, he was riding high with the top two songs on Your Hit Parade: Vaughn Monroe's "Ballerina," a collaboration with Bob Russell; and Danny Kaye and the Andrews Sisters' "Civilization (Bongo, Bongo, Bongo)," which Carl wrote with his then-closest writing partner and friend, Bob Hilliard.

You'd think that Carl -- whose earlier successes had included Frank Sinatra's "Love Lies," Count Basie's "It's Square but It Rocks" (a harbinger of rock & roll?), Mildred Bailey's "All Too Soon" (music by Duke Ellington) and Glenn Miller's signature song, "Pennsylvania 6-5000" -- would be at least a tad optimistic. But unlike the consistently sunny Terry, he was always anxious that his latest hit would be his last. So he spent half his time writing and the other half prowling the hallways, the bigwigs' offices and the piano rooms of the Brill and its environs in relentless pursuit of the next chartmaker.

That brought Carl to the Brill elevator, and to Terry, who recalls that she "hugged him with her eyes." Quickly, like a cut in a '40s romantic comedy, Carl and Terry were front row at the Copacabana drinking martinis, eating steak and laughing till it hurt at the antics of Dean Martin and Jerry Lewis, the '40s entertainment equivalent of the Beatles. A couple months of intense dating later, Carl popped the question and Terry accepted over dinner at Jack Dempsey's, with Bob Hilliard looking on.

Hilliard was a hulking six-footer who, like Carl, was well into his 30s and still lived with his mother, though in Hilliard's case the residence was the grand Ansonia Hotel on Manhattan's West Side, home at one time to Babe Ruth and Arturo Toscanini.

Hilliard was an intense glob of talent with a caustic wit. One time he and Carl were walking the streets near the Brill, where record stores like Whirling Disk and the Colony lured customers by blasting the sounds of the day's top hits out their front doors. When Bob heard Sigman/Russell's No. 1 "Ballerina" and not Sigman/Hilliard's No. 2 "Civilization," he screamed, "I spit on those stores."

Terry adored Hilliard's sense of humor. Whenever he called, he'd impersonate a different character -- a movie star, a plumber, a schoolmarm -- and she'd go with the gag. She was delighted when he tagged along on the Sigmans' honeymoon locomotive to Los Angeles, where the three of them spent three days and nights on the train eating, drinking and becoming grandmasters at Charades.

Once ensconced at Hollywood's venerable Knickerbocker Hotel, frequented over the years by such Hollywood and sports icons as Rudolf Valentino, Marylin Monroe and Joe DiMaggio, Carl and Bob wrote a batch of tunes including "Careless Hands," which became a No 1 record twice the next year -- first by Sammy Kaye, then Mel Torme.

Terry spent her days taking the Trolley up and down Hollywood Boulevard and sewing plaid skirts and velveteen jackets with her new pal Patti Clayton, the original Chiquita Banana girl.

The newlyweds went to the Pasadena Fair with "Pennsylvania 6-5000" co-writer Jerry Gray and saxophonist John Rotella and his wife; dined at the home of Carl's mentor the genius songwriter Johnny Mercer and his wife Ginger on DeLongpre Street; brunched at Patti's, where her husband, Ace Ochs, who later produced Glen Campbell's TV show, served up a matzo-brie that legend has it rivaled my grandmother's; and rubbed shoulders with The Duke at the Hollywood Roosevelt Hotel.

After six weeks in L.A., Carl and Terry returned to their converted whitestone on East 78th Street in Manhattan and launched two important projects: First, they conceived their first child, who would turn out to be me. With Terry handling that production, Carl produced a remarkable string of hits, which I would come to regard as my fraternal twins.

The charttopping success of "Careless Hands" was followed by "Hop Scotch Polka," the first hit for Howie Richmond's future powerhouse publishing firm TRO, where I'd later land my first job; "Enjoy Yourself," destined to become a New Year's staple, written via phone with Herb Magidson, and "Marshmallow World," a Sigman/Peter DeRose paean to the joys of winter which turned into a Christmas season perennial covered by Bing Crosby, Dean Martin, Brenda Lee, Darlene Love, Raul Malo and many more.

A couple years later, by which time I was a toddler and my folks had collaborated on another son (Jeff) with a third (Randy) on the way, Warner Brothers brought Sigman/Hilliard back to Hollywood to write movie musicals. The writers were given zero guidance and only the barest plot outline for the Damon Runyon-inspired "(Stop) You're Killing Me" and "She's Back on Broadway," starring Virginia Mayo. The movies and the songs weren't bad, but, as Carl would say, they "didn't make any noise." 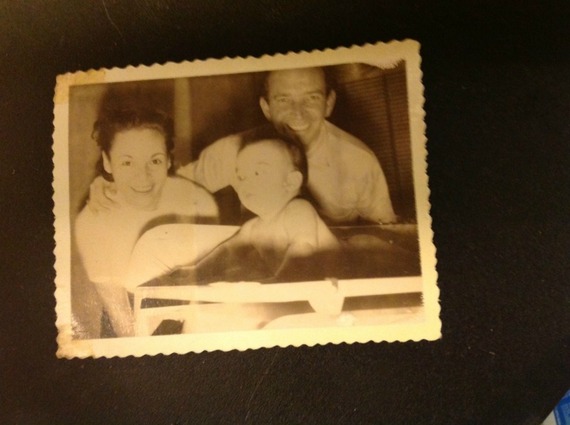 Carl and Terry with their first production

Meanwhile, Carl heard it through the grapevine that Disney Studios had romanced Hilliard away to write the score for Alice in Wonderland with Jule Styne. After the fact, Bob tried to convince Carl that this was a good thing for "the (Hilliard/Sigman) team." In truth, it was the end of the team.

Just before our family said goodbye and good riddance to California, I was playing in the backyard of our Van Nuys rental when a much bigger kid started ragging on me through an opening in the bushes that separated our houses. Before I had a chance to bawl, my mom rushed over and said, "Tell him you're heading back to Broadway and the big time." I had no idea what that meant, but I delivered the line with gusto. And I felt like a million bucks.

This is the first in series of excerpts from a forthcoming book tentatively titled Field Notes from a Music Biz Life. Next time: Johnny Mercer, Jerry Wexler and the rock & roll revolution. An enhanced version of this blog can be found at Hits Daily Double.