You could count on Wex to cut through the bullshit.

I was in a rotten mood, hunched over my desk at LA Weekly on a broiling late September afternoon in 2000, one of those oppressive Hollywood days when the temperature climbs past 100 before lunch and your East Coast friends gloat about cool breezes and spectacular fall foliage.

My father, the songwriter Carl Sigman, had died a few days before at my parents' Long Island home and I'd just been on the receiving end of a verbal thrashing, in Thai, from an enraged restaurateur whose tiny ad we'd had the gall to run near the equally tiny ad of his Thai food rival.

I loved being publisher of the nation's largest alt-weekly and its sister paper OC Weekly, but since Carl's death I'd found myself longing for the music-filled days and nights of the 1970s when I edited the New York-based trade magazine Record World and there was such a thing as a free lunch. Also free concert tickets, press junkets, lavish record company parties and more promo T-shirts than your cleaners could launder in a lifetime.

I got yelled at regularly in that job too, mainly because there could only be 10 records in the top 10, a mathematical certainty not always appreciated by the honchos and hustlers whose livelihoods (and egos) tended to be a function of their records' chart positions. But those guys were usually acting rather than acting out, and if I'm going to be abused, it might as well be about my favorite topic.

My mood brightened considerably when a call came in from Jerry Wexler, a long-time family friend and a pioneer of the '50s-'60s R&B/rock 'n' roll revolution. The last thing I needed right then was another Hallmark condolence call, but given that Wex hated clichés as much as Carl hated rock 'n' roll, I hoped for a dose of his deliciously mordant wit.

It took the man who did so much to shatter the music biz dominance of the Great American Songbook just eight words to encapsulate a half-century's worth of love, laughs, tunes, and, yes, yelling: "Carl never forgave me for rock 'n' roll."

While still in grade school, I learned about pop music and the music business at the feet of Carl, Jerry and their friends. I mean literally at their feet.

In the weeks leading up to my 10th birthday, my mom, Terry Sigman, took to running around our ranch house in leafy Great Neck, Lawn Guyland exclaiming, "You're on the threshold of teenagery!" (Never mind that a 10-year-old is only technically a teenager.)

The dispensation I received for this achievement in chronology was permission to sit under the living room table and listen to the proceedings at my folks' Saturday night dinner parties.

Cast of Characters (in frequent attendance)

On any given Saturday, six or seven of these men and their wives, most of whom lived in Great Neck or nearby Gold Coast towns like Roslyn or Manhasset, would arrive around 7 p.m. (The big jobs were all held by men; it was the '50s. But the wives were forces of nature too, about which more in a future chapter.)

The dress was snappy, the banter snappier. Cocktails of the shrimp and alcoholic varieties were served to the sounds of Cole Porter, the Gershwins or the soundtrack from West Side Story. (Never Elvis, Chuck Berry or Jackie Wilson.)

That Terry's talents did not extend to matters culinary led to scenes I wouldn't trade for a thousand gourmet feasts. Once she summoned the family kitchen-ward with the perplexing cry, "I lost the steak!" If only Norman Rockwell had been on hand to capture the moment when my parents and their three sons gathered round the oven and peered curiously into its depths in a vain attempt to locate the shriveled remains of a once-juicy slab of meat that Terry had baked into oblivion.

Terry did know how to executive-produce a fine sit-down meal. By the time the guests had put away a heavenly slice of seven-layer cake from Benkerts, a fab local bakery, they were ready to repair to the living room for a musicale.

Carl would assume the position at the Mason & Hamlin grand, still my favorite piano, and preview his latest tunes. His voice may have sounded like the air brakes on a long-haul tractor-trailer, but like many songwriters he had a way of delivering his material with a reverence that superseded tonal grace. Other guests would chime in with choice cuts from their repertoire of songs and spins.

Apres music, talk about politics (mostly liberal), culture (mostly musical) and golf (mostly fantastical) veered from intense to hilarious and back again. What riveted me were the serious, sometimes heated arguments about the pros and cons of rock'n'roll. This was no academic exercise; careers and legacies were on the line.

Carl, Harry Meyerson and Percy Faith were among the rock haters. They'd scream, "It's just noise," "It's not music," "They should call it something else," and "It's garbage." Wexler, Blaine and Kapp angrily accused their adversaries of conservatism (!) and head-in-the-sand closed ear-edness.

As it turned out, though, the folks who were most vocal about their hatred of rock'n'roll didn't miss a backbeat when hit-making opportunities arose. They weren't hypocrites or liars -- just music-makers looking for the next charttopper and capable of holding two opposing thoughts at the same time.

Looking back, I can't believe my luck. Like the singer in Stephen Sondheim's "Someone in a Tree" who recalls eavesdropping on crucial U.S.-Japan negotiations -- "Underneath the floor/And so I can't see anything/But I can hear" -- I had a front-row seat and a backstage pass to the insights and the insecurities of an extraordinary collection of minds, hearts, and ears. 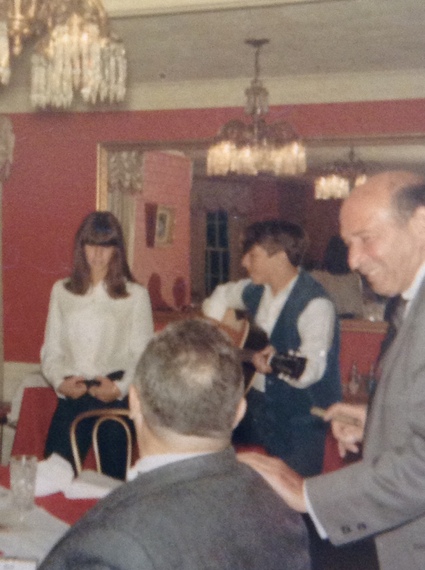 Susan Barry (Paul's daughter and my first girlfriend) and Jeff Sigman (son of Carl and Terry, brother of Michael and Randy) portraying Jerry Wexler's act Sonny & Cher, who hit big with a new-fashioned version of Carl's old-fashioned ballad, "What Now, My Love." Carl, with cigar, congratulates unidentified guest for still having his hair.

(This is the second in series of excerpts from a forthcoming book. Next time: Harry Meyerson tells the press, "We have reached the nadir of garbage" while he seeks the rights to "Tutti Frutti." Carl hates the new music but scores with Phil Spector, Van Morrison and Cilla Black. And more.)