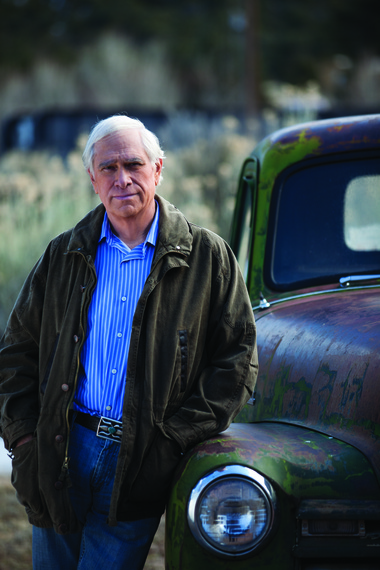 We know him as John Sandford, but that's his nom de plume. As journalist John Camp, he won the 1986 Pulitzer Prize for his five-part series about an American farm family faced with an agricultural crisis. He eventually turned to writing thriller novels, and his twenty-fourth Prey novel, Field of Prey, featuring Lucas Davenport, will be available everywhere on May 5th, 2014. Lucas and his team must use all possible resources to try capturing an elusive killer or killers who claim at least twenty victims over a course of years.

He has also written a seven book series featuring Virgil Flowers, along with six other novels. Stephen King said "If you haven't read John Sandford yet, you have been missing one of the great summer-read novelists of all time."

Lucas Davenport and his colleagues are on the hunt once again. Give us a brief sense of the situation they face in Field of Prey?

A young man is about to lose his virginity when he's parked in a car with his girlfriend near a field. They smell a terrible odor. They find an old cistern in which someone has been dumping bodies for many years. The problems for Lucas Davenport and the investigators are that these crimes have been done in such a way that there are very few clues. Those they do have are merely statistical. They get a sense of where the killer is from; they have a notion of how old he must be; and they try to narrow it down, but it gets more and more difficult to pinpoint the person. And eventually, certain things go awry.

The villain is this novel is quite unique. How do you construct and develop your villains?

My villains are more of an engineering construct than anything coming from inspiration. When I'm setting up a book and thinking about what I want the villain to be, I will survey a range of possibilities. Will these be impulse murders? Is it going to be someone who has a psychotic break? Are the murders done for money, love, power or sexual gratification? I pick the gender of the person -- it can be either a man or woman. The killer was a woman in my previous novel, Silken Prey. Then I assign the villain certain characteristics, which are mostly taken from people I didn't like in the past.

You grew up, were educated, became a journalist and won a Pulitzer Prize as John Camp. Because another writer's name was the same as yours, you became John Sandford and are now famous. Does John Camp ever feel cheated?

No, he really doesn't. I was a newspaper columnist for a while and I didn't much care for it. I'm a reporter type, not a celebrity type. I don't like people looking at me; I'd rather be watching people. As a columnist, my picture was at the top of the column, so when I was in the downtown area of St. Paul, people recognized me and would talk to me. A woman once said she saw me with some friends at a restaurant -- and how "literary" we looked. It was supposed to be flattering, but the thing is, it disturbed me that people were watching me while I was eating. I don't know how celebrities deal with that sort of thing. So I'm perfectly content to be John Camp 99 percent of the time and John Sandford when I write.

So you still remain John Camp in terms of everyday life?

Absolutely. I'm John Camp in terms of everything except the books.

Tell us about your involvement in an archeological dig.

In the early 90s I was reading a great deal of history, which has always been a passion of mine. I studied American history in college. I then studied European history and eventually got to the history of the bible. The question with those stories has always been what part is history, what's myth, and what's actually tendentious religious politicking? I thought there might be enough actual history there to be very interesting. I went to the Holy Land to look this over.

While I was over there I ran into a man who was the head of the Department of Archeology at the Hebrew University in Jerusalem. We look quite a bit alike -- enough so that people would mistake us for each other. It turned out his grandparents came from the same town in Lithuania mine where came from. I'm a Roman Catholic and he's a Jew, but there had to be some crossover someplace along the line. We really hit it off and he convinced me to join the dig at a site called Tel Rehov. We were investigating the era of Solomon and David, trying to determine if the stories about them were credible. The dig went on for 15 years and I would go there for a period of time each year. It was grueling and fascinating work. I loved it. We now have three or four large volumes about what we unearthed, and we'll have an exhibition of our findings from Tel Rehov at the Israel Museum next winter. That archeological dig was one of the great times of my life.

You're a Civil War and history buff. Have you ever thought of writing a historical thriller?

It's crossed my mind but I think, probably not. I take history very seriously and would feel badly if I didn't do it well. Bernard Cornwell, a British writer, writes entrancing historical novels and if I didn't do them as well as he does, I wouldn't be happy.

A while back, you left the Prey novels and began writing others. Then you returned to them. Tell us why you did that and if it might happen again.

I think it will happen again. That is, if I keep writing. My health is good but I'm getting older. My first wife died a few years ago and I've remarried. Michelle and I have -- basically because of an interest she has -- been involved in writing a young adult book. It's called Uncaged and will be coming out July of this year. I've really gotten involved with it. I'll be doing a 25th Prey novel, but I'd like to do other things at this time.

Have you found any problems in writing a 25 volume series with a recurring character?

There are problems. It just seems like I've done it an awful lot. You begin wondering what the tolerance of the readers may be for yet another story about Lucas Davenport. I know my audience. Many of my readers are women; they tend to be affluent and educated. One of the things both men and women seem to be interested in is some kind of romantic aspect to the novels. And Lucas is getting older. We both started out at age 45. He's now 50, and I'm 70. I've kept his aging process slow, but I don't know if I can keep doing it. He's getting out of that romantic target age. So I don't really know what's going to happen with Lucas. I want to keep my readers -- who I really value. And you know, twenty five novels in a series is quite a big, round number.

Any special time of day for writing?

Usually late at night. I fool around all day. I play golf and hang out. I go around and look at stuff. I've got a couple of other hobbies.

I'm a painter; that's the main thing. I was painting with oils but grew allergic to the volatile spirits so I changed to acrylics. I recently decided I need to write some music. But I don't know anything about music, so I started studying music theory and bought a guitar. I've been told since I was a child that I can't sing, so now I'm going to see if I can learn to sing. I sometimes laugh at myself for wanting to do these things, but that's how it is.

What advice do you have for young writers?

Young writers have a serious problem: they don't know anything. They think they do, but they don't. Eventually, they will know something because knowing life comes with living it. If you're in your twenties, you haven't had enough life experience. My basic advice for someone who's twenty-two years old is to join the army. You'll meet many people from a wide variety of backgrounds and you're going to do all kinds of weird stuff you'll never encounter in civilian life. Other options are to become a cop or a social worker. You really need to stack up as much experience as you can if you're going to be a writer. Those experiences can be mined forever. I've been doing it for years. I was in army and was a journalist. When I was in the army, the mixture of kids to whom I was exposed was incredible. For a young writer, those experiences can be really valuable. Newspaper reporting makes for good exposure to life, but jobs are so hard to get now with the newspaper industry shrinking.

Have you seen changes in the thriller genre over the years?

The novels have become more sophisticated and far more violent. The writers I read as a kid like John D. MacDonald didn't create villains like the ones being created now. The villains really set the tenor of a thriller or crime novel. I don't like certain kinds of villains -- the remorseless killers who are so smart they evade every effort made to capture them. They're almost supernatural. I think we see more of that today than ever before.

I also don't like some of the heroes we encounter today: American military guys who are superheroes -- the ones who go in against tremendous odds and manage to survive with nothing but a torn shirt. I just don't like that kind of stuff. That's why I liked the movie Zero Dark Thirty so much, or Black Hawk Down. They seemed so real to me. I like thrillers to be fairly real. Every one of my main characters has been shot. Their wives freak out and worry about them. They have marital problems because of their jobs. In other words, they're human. I'm a commercial writer, but I do like to keep at least one hand on reality.

Congratulations on your 24th Prey novel, and best of luck in your music and painting endeavors. (Author's photo: David Burnett)

Mark Rubinstein is the author of Mad Dog House, Love Gone Mad and The Foot Soldier