Long before there was Oprah, The Secret or workshops on making Vision Maps (like, really long before,) there were women in far-flung places taking their lives into their own slender hands, duking it out with destiny, and winning. None of whom we'd heard of till we decided to do some duking out of our own, albeit in a rather unorthodox way.

A few years ago, we each found ourselves at the kind of crossroads common to a lot of women at mid-life and in their twenties--Claire realized she had no real vision for life after motherhood, and Mia was finding that adult life ain't all it's cracked up to be. We decided that leaving our lives might help us better see and, hopefully, change our lives. Which was how we found ourselves circumnavigating the globe over the course of five months (venturing everywhere from China, to Nepal, to Egypt, to the Balkans, to France), an experience chronicled in our new memoir, Have Mother, Will Travel.

We had two other goals in mind. One was to shake up and renew our stale and strained relationship; our first memoir, ComeBack, chronicled Mia's teenage drug addiction and, having come so close to losing each other, we didn't want to stay regressed in old patterns. The other was to take a more global look at women's lives in general, and mothers and adult daughters in particular.

Because we noticed that we were far from alone in our dissatisfaction. For all of our gains and progress, there remains great debate as to whether American women are much happier than we were when we lacked the rights and agency we now have. And young moms, working moms in particular, well, check out mommy blogs, they're juggling, struggling and not getting much help (or sleep.)

And so, as we immersed ourselves in the world, examining our own lives, we examined others. Are European 20somethings more comfortable with adulthood? Is motherhood and career more easily balanced outside of the United States? How and why? What commonalities are there between women of all ages, in all countries? Who are some great role models we can look to in creating a meaningful and satisfying life?

It's often said that small deeds go unnoticed, but where women are concerned, history hasn't recognized some pretty freakin' big ones. Because in addition to studying modern women's lives, we looked throughout history and found no shortage of ones who were kicking ass and taking names. Women who had cojones long before we had catch phrases, before knowing who you were was called "authenticity," knowing what you wanted was called "vision," and doing whatever it took to get it was called "intention."

These women give "working mother" a whole 'nother meaning. 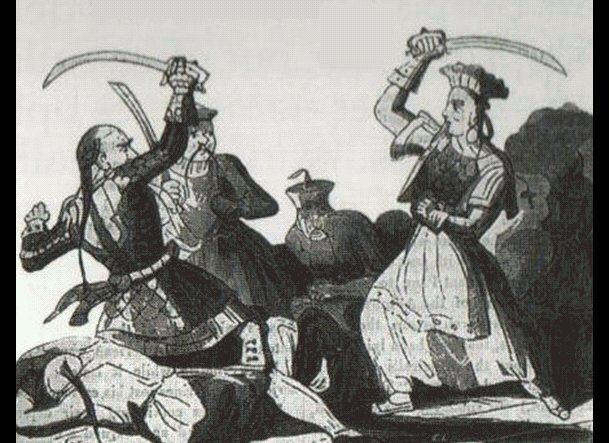 1 / 6
Ching Shih
The first stop on our journey was China, where there's still a persisting preference for boy babies and a Barbie megastore in Shanghai was hailed as a sign of female empowerment. The store bombed and signs still admonish that "Girl babies matter, too!" Perhaps Mattel should have marketed a Ching Shih doll instead. When pirates captured the floating brothel where Ching Shih plied her trade in 1800, she unleashed some serious fury. After marrying the captain (<em>and</em> successfully demanding 50% of all booty), she took complete control when he died in 1807, wrangling thousands of hardened pirates into submission - including castrating rapists. Her Red Flag Fleet of over 1,500 ships and 60,000 men became powerful enough to levy taxes on coastal towns from Canton to Macau, which unleashed the fury of the Emperor. She crushed his forces, then trashed the navies of the Dutch, the Portuguese and the British, making her the most successful pirate in history.