Nine officials of the Fédération Internationale de Football Association (FIFA), including two of its current vice presidents, were among 14 people indicted on Wednesday for racketeering conspiracy and corruption, the Department of Justice announced in a statement.

In addition to FIFA officials, a number of officials of other soccer governing bodies were named in the 47-count indictment for “racketeering, wire fraud and money laundering conspiracies, among other offenses, in connection with the defendants’ participation in a 24-year scheme to enrich themselves through the corruption of international soccer.”

The arrests come days ahead of Friday’s FIFA presidential elections, which will still go ahead. Current FIFA president, Sepp Blatter was not among those arrested and is expected to win his fifth term, The Independent reported. 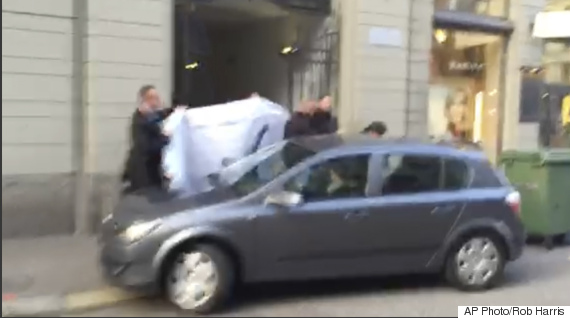 Picture taken from a cell phone video shows hotel employees holding a blanket to hide the identity of a person led out of a side entrance of the Baur au Lac hotel to a waiting car in Zurich, Switzerland, Wednesday, May 27, 2015. Six soccer officials were arrested and detained by Swiss police on Wednesday pending extradition at the request of U.S. authorities after a raid in the luxury hotel. (AP Photo/Rob Harris)

In its response to the arrests, FIFA issued a statement saying it is "pleased to see that the investigation is being energetically pursued" and "welcomes actions that can help contribute to rooting out any wrongdoing in football." 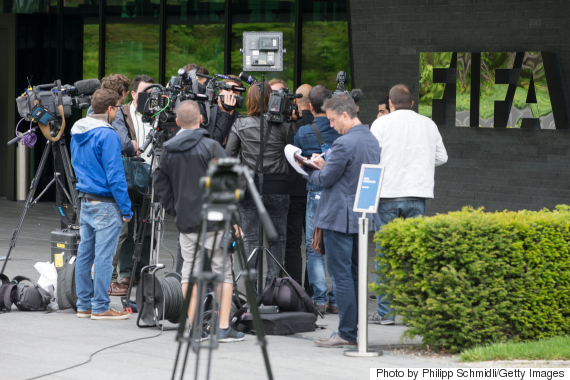 TV stations work after a press conference at the FIFA headquarters on May 27, 2015 in Zurich, Switzerland. (Photo by Philipp Schmidli/Getty Images)

The arrests were made early Wednesday morning by Swiss authorities in Zurich on behalf of the United States, the New York Times reported that the men were apprehended peacefully.

As leaders of FIFA, soccer’s global governing body, gathered for their annual meeting, more than a dozen plain-clothed Swiss law enforcement officials arrived unannounced at the Baur au Lac hotel, an elegant five-star property with views of the Alps and Lake Zurich. They went to the front desk to get room numbers and then proceeded upstairs.

The arrests were carried out peacefully. One FIFA official, Eduardo Li of Costa Rica, was led by the authorities from his room to a side-door exit of the hotel. He was allowed to bring his luggage, which was adorned with FIFA logos.

Here is the list of soccer officials who were named in the indictment:

A search warrant is also being executed at the headquarters of Confederation of North, Central America and Caribbean Association Football (CONCACAF) headquarters in Miami, Florida. CONCACAF is the major soccer governing body of U.S. soccer, among other nations.

"The indictment alleges corruption that is rampant, systemic, and deep-rooted both abroad and here in the United States,” U.S. Attorney General Loretta Lynch said.

She slammed soccer officials for actions that she said have spanned two decades in order to "acquire millions of dollars in bribes and kickbacks" through abuse of power.

Lynch spoke to the media alongside acting FBI Director James B. Comey, U.S. Attorney Kelly T. Currie of the Eastern District of New York and Chief Richard Weber of the IRS-Criminal Investigation later on Wednesday.

She said the Justice Department is "determined to end these practices; to root out corruption; and to bring wrongdoers to justice."

The attorney general also said that since 1991, "over and over, year after year, tournament after tournament" world soccer officials took bribes form sports marketers in exchange for commercial rights to tournaments.

The indictment alleges that the FIFA officials and others used "alliance with unscrupulous sports marketing executives who shut out competitors and kept highly lucrative contracts for themselves." It also found corruption taking place around the FIFA's presidential elections and a 1996 sponsorship deal between Nike and the Brazilian national soccer team.

Swiss authorities have also opened separate investigations into both Qatar's 2022 and Russia's 2018 World Cup bids, the New York Times reported. Allegations of bribery emerged shortly after it was announced in 2010 that Qatar would host the 2022 World Cup. 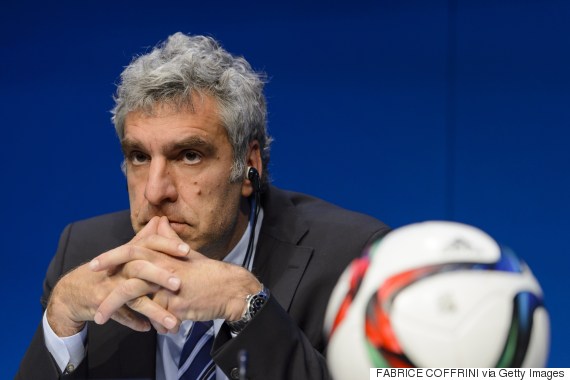 FIFA spokesman Walter De Gregorio gives a press conference at the FIFA headquarters, on May 27, 2015 in Zurich. Swiss police on Wednesday raided a Zurich hotel to detain six top football officials as part of a US investigation into tens of millions of dollars of bribes paid to sport leaders, Swiss authorities and media reports said. (Getty)

At a press conference on Wednesday, FIFA spokesman Walter De Gregorio said plans for Qatar 2022 and Russia 2018 "will still be going ahead."

"The timing may not be obviously the best," he added, but said FIFA will cooperate with the investigation.

FIFA welcomes actions that can help contribute to rooting out any wrongdoing in football. We understand that today’s actions by the Swiss Federal Office of Justice on behalf of the US authorities and the Swiss Office of the Attorney General (initiated by FIFA through the submission of the file on the 2018/2022 FIFA World Cup bidding process) relate to different matters.

Firstly, the arrest of six individuals this morning in Zurich concerns investigations by the US Attorney’s Office for the Eastern District of the State of New York. The Swiss authorities, acting on behalf of their US counterparts, arrested the individuals for activities carried out in relation with CONCACAF and CONMEBOL business.

The second instance follows FIFA’s initiative of presenting the file on the 2018/2022 FIFA World Cup™ bidding process to the Swiss Office of the Attorney General in November 2014. The authorities are taking the opportunity of the FIFA Congress to interview those FIFA Executive Committee members who are not Swiss residents who voted back in 2010 and are still in office.

Today, the Swiss Office of the Attorney General announced that it has opened criminal proceedings against persons unknown in relation to the 2018/2022 FIFA World Cup™ bidding process. FIFA is fully cooperating with the investigation and is supporting the collection of evidence in this regard. As noted by the Swiss authorities, this collection of evidence is being carried out on a cooperative basis.

We are pleased to see that the investigation is being energetically pursued for the good of football and believe that it will help to reinforce measures that FIFA has already taken.

PHOTO GALLERY
15 Reasons Why FIFA Is The Worst