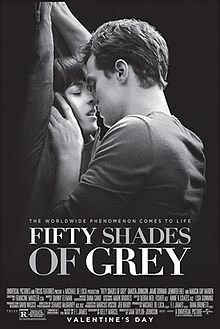 Love Story was the big splashy romance of 1970 which every serious filmgoer and critic loved to trash. Fifty Shades of Grey is the candidate for 2015. The difference was--and it would be quite telling to analyze the cultural substrates out of which both films were conceived--that Love Story's melodrama derived from dispossession while the catharsis or lack thereof in Fifty Shades derives from possession. Possession is part of the lexicon of sado-masochism as is control which Fifty Shades underscores as a kind of meaning making in and of itself. Action seems to have more significance precisely because it becomes a religion which is prescribed and ritualized to the point where its intention is totally transparent; the freedom and poetic ambiguity which is the lingua franca of so-called normative love is replaced with something more emphatic. For instance one of the great S&M masterpieces of all time, The Story of O, derives its power from the protagonist's complete and utter abandonment of her ego, the loss of self that comes from giving one's will over to another person entirely. Fifty Shades is a romance in which there is a sado-masochistic sub plot. It's a peccadillo of Christian Grey's (Jamie Dornan) that Anastasia Steele (Dakota Johnson) has to put up with to win him over. Similarly though Grey claims that he's not looking for love, he's constantly negotiating and caving in on his demands in order to win over a woman who is more a wild card than a true submissive. It's always fun to consider works of popular entertainment like Fifty Shades beneath contempt. But it's also boring because what's bad about it, the stock characters (the rich guy and ingénue girl with their respective wounds) and settings (the dressing room filled with ties that have multiple uses and the overly polished executive suite with its fashionista secretaries) is more obvious than what has potential interest. For instance Christian presents Anastasia with a contract specifying the acts which she will consent to participate in and the devices. She rejects genital clamps, along with anal or vaginal fist fucking. But she's a good sport when it comes to floggers and suspension. It's the sadomasochistic version of a prenuptial agreement. But isn't this exactly what the state of California is requiring in its latest affirmative consent statute whereby on campus foreplay becomes reduced to litigation ("I'm not going to touch you until I have your written consent," Grey says). True sadomasochism in both pornography and serious art films like Lars von Trier's Nymphomaniac participates in no such mediation, providing instead the illusion of the disturbing kind of degradation and humiliation that's the vehicle by which not only clothes but ego are shed. The character of Christian Grey as rendered by Sam Taylor-Johnson's direction of the E. L James novel, is too tentative to be truly unsettling. His childhood trauma has made it impossible for him to trust or tolerate intimacy as much as he's portrayed as desiring those very things. So the affect of dominance allows him only the illusion of control. In fact, he's a sheep in wolf's clothing. The ambivalence with which Grey undertakes his calling may account for the character's commercial appeal. But in this case, it also humanizes him and almost makes him interesting.