Father Christmas and a trio of sexy Santa girls greeted guests at the British American Business Council's annual Christmas luncheon, held at Fig restaurant in Santa Monica's Fairmont Miramar Hotel. But the hundreds who gathered there had come to give, not receive.

And in the spirit of giving, more than 750 toys were donated to Children's Hospital Los Angeles. In addition, a silent auction was held to raise funds for the worthy charitable cause, and with Champagne flowing, so as to loosen up the purse strings. 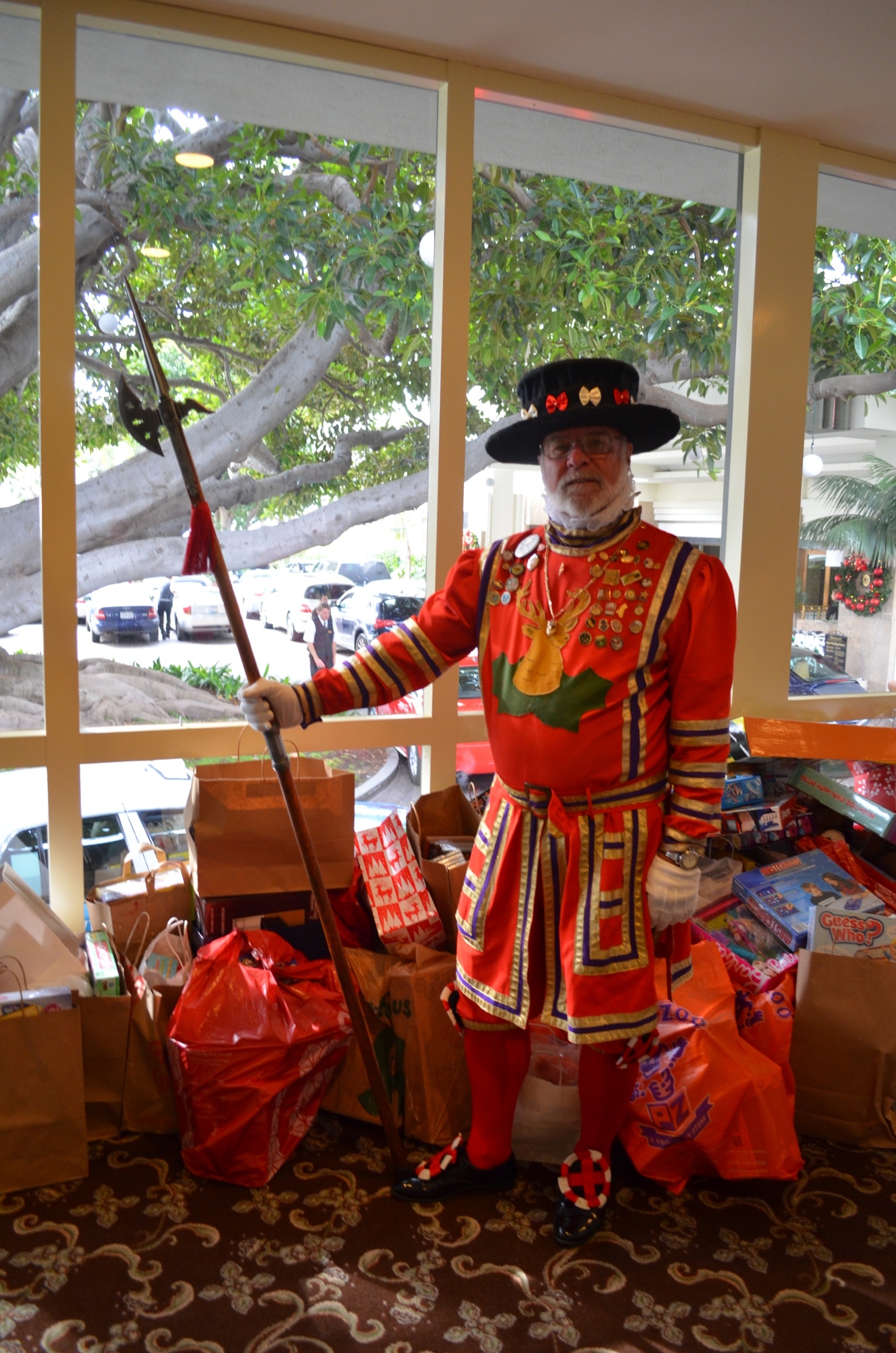 As for the luncheon, few restaurants can pull off such a banquet, but as always, Chef Ray Garcia and the team at Fig were up for the task. Diners feasted on salt-baked Bosc pear salad, roasted turkey and potatoes with gravy, cranberry sauce, cherry chestnut stuffing and Christmas pudding and custard -- a fine English banquet.

Master of Ceremonies Carlos Amezcua of Fox11 News provided opening remarks -- something of which members of the BABC have grown accustomed -- and after a solemn invocation by Lesley Nicol, of Downton Abbey fame, and loyal toasts by British Consul General Dame Barbara Hay and BABC LA President Paul J. Wright, an afternoon of mirth ensued. 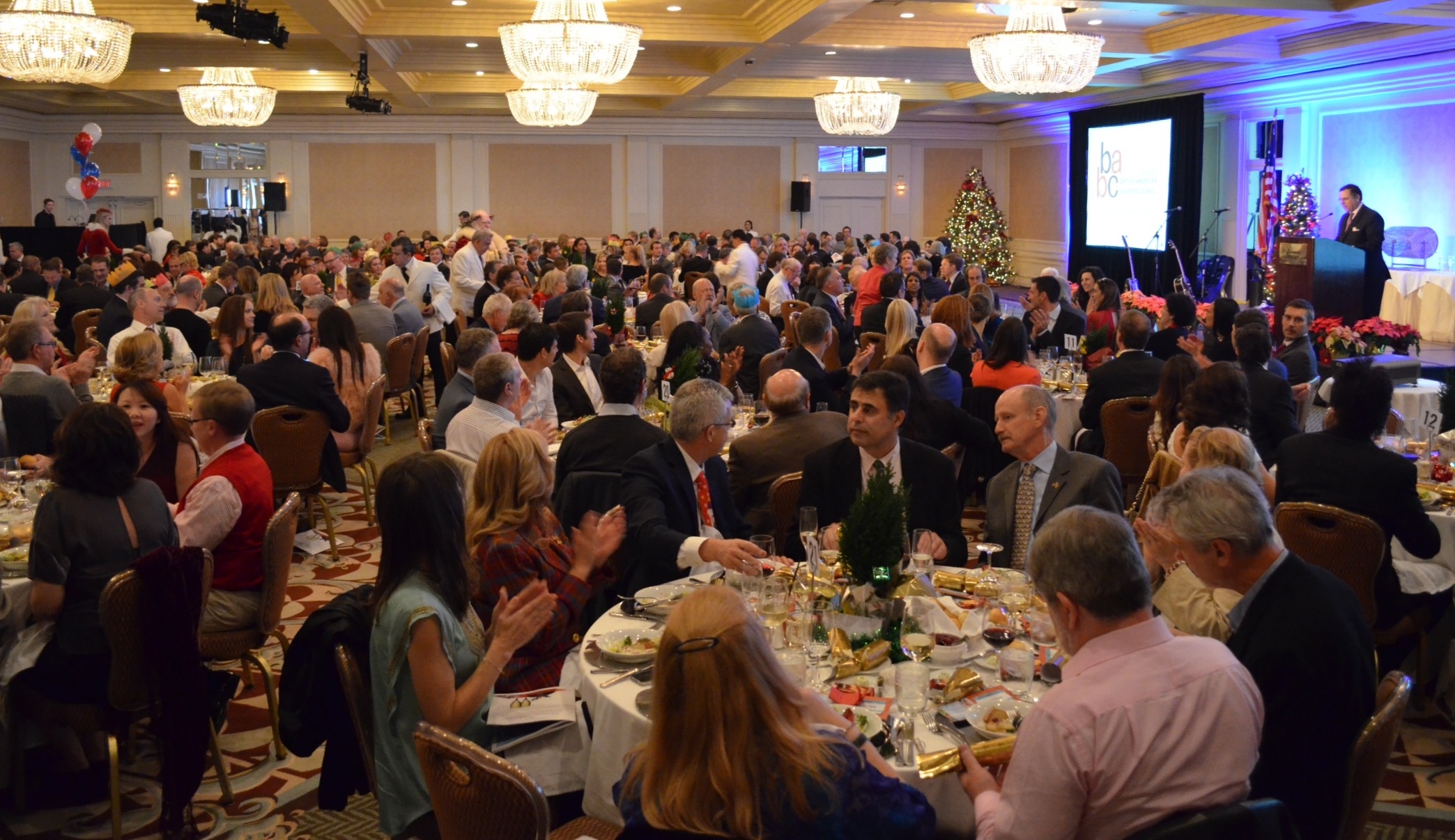 English musician Peter Asher delighted the ballroom with a few songs, including a rendition of the Peter & Gordon classic, "A World Without Love." And continuing in the English tradition, "Meet the Ugly Stepsisters" provided raucous hilarity in drag, and just to throw a curve ball into the mix, the entertainment concluded with Iowa-born actor Tom Arnold. Huh?

In actuality, Arnold turned out to be a fine choice, as he regaled the ballroom with his experiences with British star Hugh Grant on some long-forgotten film. Moving back and forth between skewering and self-effacing, Arnold drew laughs with his adventurous tale, which climaxed (so to speak) with Grant's being arrested with a prostitute. He wrapped up his anecdotal speech with a bow by bringing it all back to the notion of charity.

Sports enthusiasts were also treated, with items such as: boxing gloves signed by Oscar de la Hoya and Amir Khan; a 1966-England Football's 40th and 50th anniversary autographed jerseys; a pair of three-day VIP passes to the Las Vegas finals of USA sevens, plus a $50 merchandise credit; a sailing adventure aboard a private yacht; USC football and basketball tickets (fight on!); and golf at Riviera Country Club with Barry Harvey.

And for lovers of British cuisine: dinner at Bouchon Bistro and a private kitchen tour; private dinner by Monrose Catering; dinner for four at Crustacean; and gift certificates at Beckham Grill, House of An, The Lobster, O'Brien's Pub, The Olde Ship, Robin Hood Pub, Tam O'Shanter and Ye Olde King's Head, a private dinner for six with Dame Barbara Hay; and a tour and lunch abroad Cunard's Queen Elizabeth II.

And in the spirit of Christmas and because this is the entertainment capital of the world, gift baskets were in order, including one from Paramount Studios; "Late, Late Show with Craig Ferguson" tickets; "A Snow White Christmas" tickets; ballet tickets; the "Fawlty Towers" DVD collection; a BBC America basket of DVDs; as well as treats from Big Man Bakes; Walker's Shortbread; and assorted gifts from British Connection; and W. Grant & Sons.