The upcoming documentary "Fight Church" released its official trailer this week, and it provides a fascinating window into the unusual world of fighting pastors.

Directed by Bryan Storkel and Academy Award-winner Daniel Junge, the film examines the contradictory phenomenon of religious leaders practicing mixed martial arts (MMA), asking the question, "Can you love your neighbor as yourself and at the same time knee him in the face as hard as you can?"

Storkel and Junge told The Huffington Post that they became interested in the project after hearing about a pastor with a "fight ministry," and realized that there were hundreds of churches around the country used fights as a way of building community and attracting new congregants. "That's what was shocking to us," they said. Junge added, "Beyond churches that had formal or informal fight ministries, we discovered innumerable churches that included MMA as a component of a men's program."

The documentary is an official selection for the Nashville Film Festival and the Independent Film Festival Boston in 2014. It will premiere on April 24th in Boston.

Storkel defined a "fight ministry" as "anything involving fighting that brings people into the church." While some churches offer gym classes or fight viewings, others actually hold MMA battles on church property.

Our goal is to tell this entertaining story in a completely objective tone, and to let the story speak for itself. Like the Oscar-nominated Jesus Camp, the film will present these incredibly provocative characters in an objective and often sympathetic light.

We will ask the audience to come to their own conclusions about the connections between religion and condoned violence, as well as explore the growing mainstreaming of MMA in the US, and discuss Christianity in our post-modern society.

Though Jesus told his followers to "turn the other cheek" with regards to violence, some of these fighting pastors point to the Jesus of Revelation as an example of a tougher role model. The directors told The Huffington Post that a common justification for the seemingly contradictory practice of fighting in church is the opinion that "Nowhere in the Bible does it specifically state that fighting for sport is prohibited."

Another means of rationalizing the practice was holding up Biblical heroes like David and Samson as examples, both of whom are known for their strength and talents on the battlefield.

One pastor explains in the trailer, "We'll just be a couple of God-fearing men punching each other in the face." 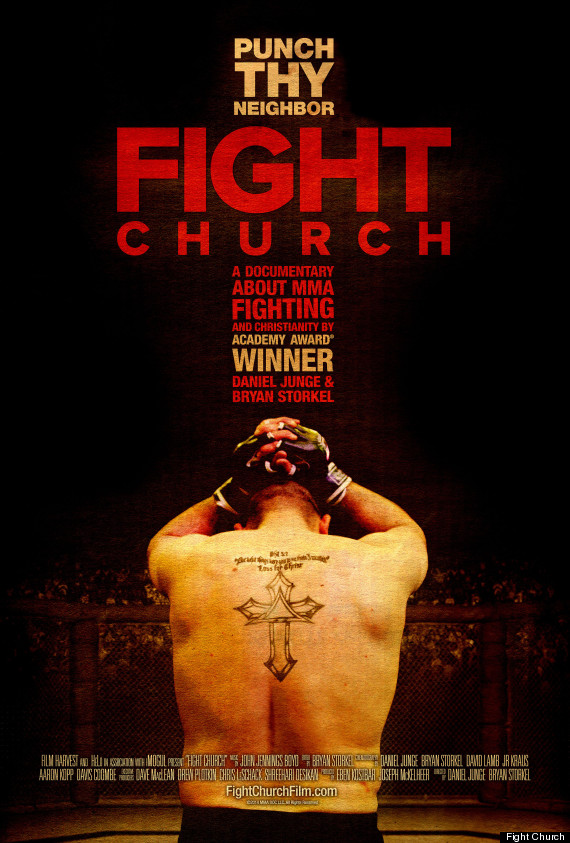 The directors told The Huffington Post that the MMA programs are attended by men and boys of all ages, and contribute to specific ideas about masculinity. In these churches, "there is an expectation about how young men should be raised," they said.

As one pastor states in the trailer, "Mainstream Christianity has feminized men." Another commented, "Tough guys need Jesus too."

The directors said that the majority of the churches they examined were from an evangelical background, and that the Catholic Church and the Southern Baptist Convention had criticized the practice of fight ministry.